A few seconds into We Are Lady Parts, you think you know what the show’s going to be: Amina Hussain (Anjana Vasan), a mousy, hijab-wearing PhD student, sitting across the room from her potential spouse and his parents. But just as the consternation starts to set in — ugh, another arranged marriage story — We Are Lady Parts starts to let you know what kind of show it’s actually going to be.

As Amina fantasizes about her potential spouse, her parents regale him and his parents with the most embarrassing details about Amina’s life: her premenstrual breakouts, her tendency to sweat and her nervy disposition that induces diarrhea and vomiting. And even after the potential suitor and his parents denounce Amina’s music as haram, her father persists in recounting a past performance… and then breaks out in song with Amina’s mother.

Whatever you thought We Are Lady Parts was going to be, this ain’t it. And just in case those first few minutes didn’t make it abundantly clear, the show cuts to band practice for the eponymous all-girl, all-Muslim punk band, and the band’s lead singer shouts, “I’m going to kill my sister!” 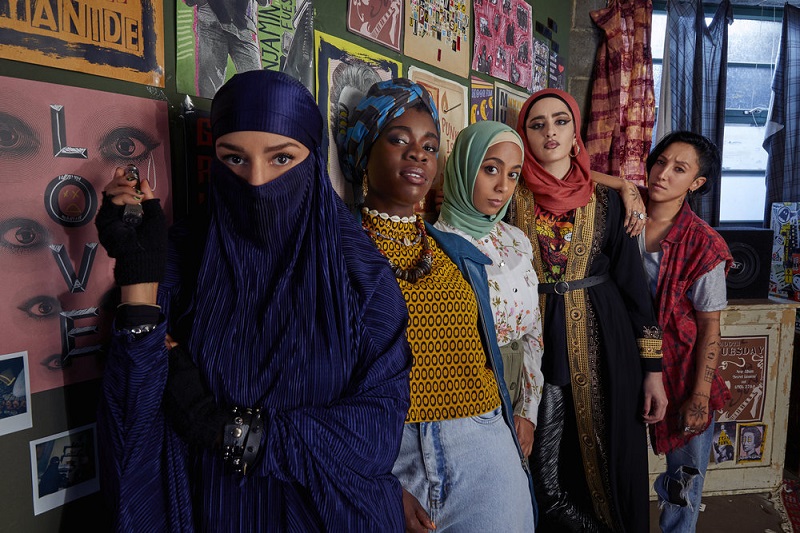 Lady Parts is unlike anything you’ve ever seen on television but it’s not without its contemporaries.
Created, written and directed by Nida Manzoor, We Are Lady Parts has the feminist sensibilities of Fleabag while echoing some of Chewing Gum‘s comedic ones. It has Ackley Bridge‘s foregrounding of multiple Muslim characters, so that none have to shoulder the burden of representing an entire community on their own. It parallels Derry Girls in its structure: showcasing five central characters but spending more time with some than others. But, while it shares some of its DNA with other British exports, We Are Lady Parts has its own voice… and it is loud, raucous and unapologetic.

The band channels the ethos of what riot grrrl began — Dickless, Le Tigre and Babes in Toyland all get a shout-out in the show’s first episode — and presents it all through the lens of a racially diverse group of Muslim women. The band’s is driven by its lead singer, Saira (Sarah Kameela Impey). The James Dean-eseque singer/guitar/Halal butcher channels her anger — which lives just beneath her steely veneer — into the Lady Parts’ aggressive sound. She’s supported by Bisma (Faith Omole) on bass and Ayesha (Juliette Motamed) on drums, while Momtaz (Lucie Shorthouse) acts as the band’s manager.

“We’re sisters who pray together, play together, speaking our truth to whoever can be asked to listen,” Saira explains.

Initially, Saira determines that the band’s sound is missing something: a lead guitarist. Lady Parts finds their unlikely new member when Amina shows up at their audition looking for the boy who handed her the band’s flyer. The band extends an offer: a short stint in Lady Parts in exchange for a date with the man she’s lusting after (who happens to be Ayesha’s brother). Amina’s so desperate to find a husband that she readily agrees, despite “a nervy disposition that induces diarrhea and vomiting.” Over six episodes — oh, those cursed abbreviated British seasons — the band begins to forge its identity and, in the process, the band members discover more about themselves. 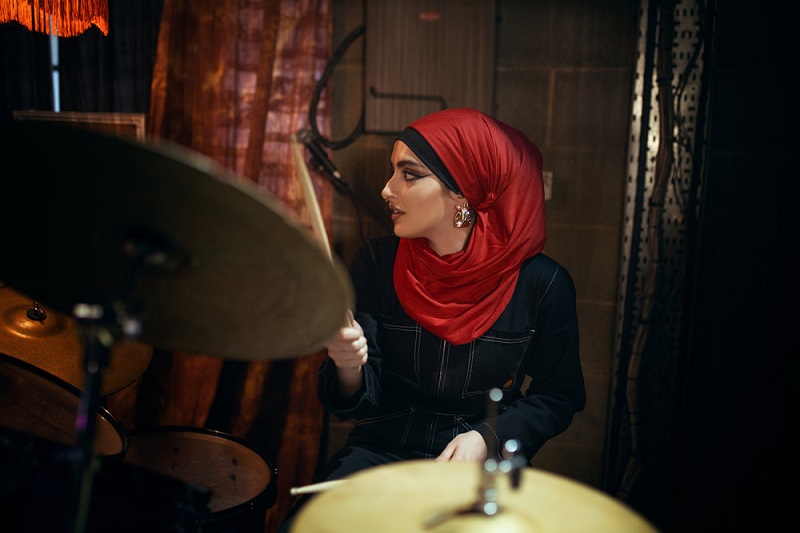 For most of Lady Parts‘ first series, Ayesha doesn’t seem like the self-discovery type. She’s confident, navigating the world with an enviable swagger. She’s prickly and quick to insult but, in the quiet moments, her callousness recedes. Even as she laments how annoying Amina is — “you do get on my tits though,” Ayesha says — she works behind the scenes to ensure that her brother doesn’t break Amina’s heart. But it’s a band meeting with Zarina Zee, a social media influencer and the culture editor at Yellow Tongue Magazine, that stops Ayesha in her tracks.

Seconds before Ayesha spots Zarina, she’s outside mocking her — ignoring Momtaz’s pleas to behave — but when she sees her, she’s left slack-jawed. It doesn’t even matter that, in that first meeting, Zarina turns out to be every bit the caricature that Ayesha imagined. Suddenly, she’s every bit as romance obsessed as Amina, with Chavela Vargas’ “Paloma Negra” soundtracking her daydream. Her quick wit gives way to stammering. Gone is Ayesha’s confidence. Gone is her swagger. All that’s left is a girl with a crush.

Aside from some heartfelt teasing about her newfound softness, Ayesha’s feelings for are a non-issue within her Lady Parts’ bubble. But when Zarina questions Ayesha about how it feels to be a queer Muslim woman for the article she’s writing about the band, Ayesha clams up and asks Zarina not to go there. Sensing a story, Zarina pushes: first urging Ayesha to be a role model for queer kids, then reminding her that the essence of punk is not caring what people think. But this time — and for what, I imagine, is the first time — Ayesha doesn’t give in and Zarina allows it.

I longed learn more about Ayesha. Why does this ostentatious Muslimah whose style announces her before she can even say a word recoil at the idea of being out? Why is she every bit as desperate for love as Amina? What drives her to play this particular genre of music? And what’s with her weird fascination with Blink-182? We Are Lady Parts frustratingly, leaves a lot about Ayesha unanswered. If you watch Lady Parts solely looking to invest in the queer representation, you may well leave disappointed.

But the strength of We Are Lady Parts doesn’t just lie in its queer representation, it’s in the show’s ability to tell stories that resonate with queer audiences. Amina’s story is, on its face, a story about a woman obsessively searching for a husband. She’s a fixture on the apps, she creates elaborate fantasies about her would-be suitors. But beneath the surface, Amina’s story is one about being caught between expectations of who she should be and her true passions. She, quite literally, hides tributes to her passions in a closet. 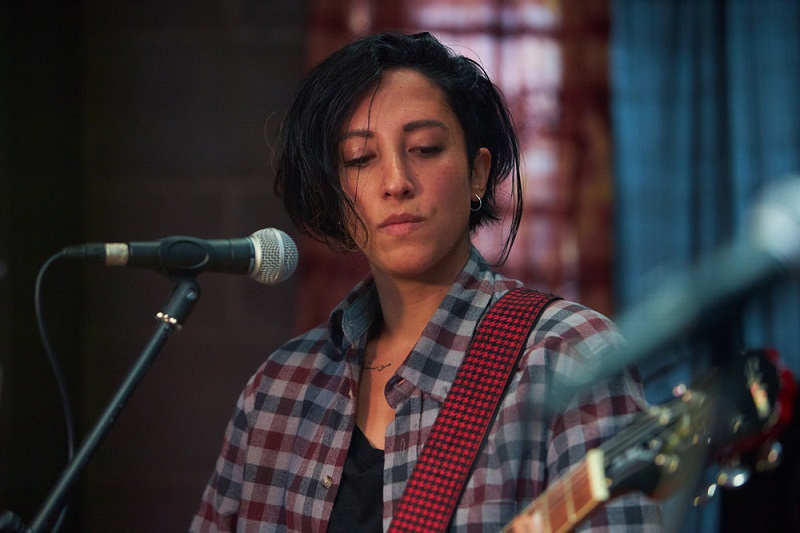 Likewise, Saira’s story is, at its core, about finding your chosen family and allowing yourself to be loved by them, after experiencing hurt and disappointment at the hands of your biological family. At one point, she returns to her familial home to discover that it is not longer hers and that time’s passage has made strangers of them all. She glances upon the family pictures on the wall — trying to remember a moment when home felt like a place where she belonged — and her mother interrupts.

“You were my good girl,” she laments to her wayward child. “It was Ruksana that was always getting into trouble. You were my sweet, quiet girl. What happened?”

“Nothing happened,” Saira answers plainly. “I’m just not what you want.”

It’s such a brilliant juxtaposition to the night she spent at Amina’s. Saira enters Amina’s home timidly, expecting the same rejection that she’s experienced at her own home, but she doesn’t find it. Amina’s parents are welcoming. They embrace their daughter’s eccentricities, celebrate them even. Saira’s dumbfounded by the whole thing, as if she had never imagined a world in which supportive parents existed.

We Are Lady Parts‘ debut coincides with a broader conversation about the dearth of Muslim representation on the big screen but it obscures problems on the small screen, where representation still remains paltry, particularly for Muslim women and especially for queer Muslim women. That said, between Ayesha of Lady Parts, Adena El-Amin’s return on The Bold Type, Rahim’s emergence on Love, Victor, it’s been quite the summer for queer Muslims… and I hope that we’re at the start of a real sea change. Hopefully, the success of these shows will expand the types of stories that get told and our capacity to see ourselves in them.

The storylines of We Are Lady Parts echo stories that we’ve told about ourselves. They fill an often undervalued aspect of representation: offering a reminder that inside each of us, is all of us.

We Are Lady Parts is now available for streaming on multiple platforms: All 4 in the UK, Peacock in the US and Stack TV in Canada.