Anyway, we had a lot to unpack here. I do want to note that our jokes are centered around the couches themselves and not anyone’s identities, and that as a goth older sister I legally reserve the right to make jokes about the siblings of goth sisters.

Stef: Has everyone, uh, seen these?

terrifying bisexual couch aside, I appreciate that the lesbian one looks inspired by flamingos and urine

Nicole: I was gonna say
I don’t think i can deal with a couch covered in hands telling me “nobody believes you”

Shelli: What is going on with the asexual couch my god

Rachel: I loved the progress couch’s work in Annihilation

Stef: I think the asexual couch is kinda cute? like a geode? but hideous?

Tracy: The progress one creeps me out. Like that couch would have to be in a really damp environment to start to grow plants.

Shelli: I feel like it’s gonna eat me and not in a good way.

Stef: Rachel and I have talked about how the odds are stacked against bisexual graphic design, this couch is not helping

Heather: oh wow Étoile has that trans couch in her house in Animal Crossing! 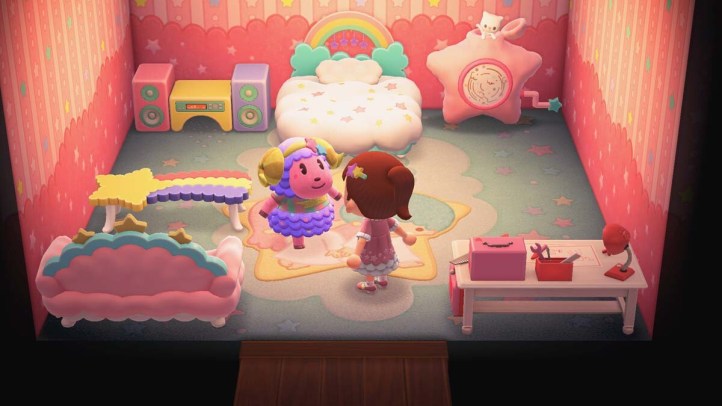 Nicole: @stef nobODy bELieVes yOu

Rachel: I love that ours (the bisexual couch) is the only one w text bc someone in design was like “they’re gonna want it to talk about erasure, trust me”

Nicole: Is the non-binary couch like, wearing a couch harness?

Stef: yes, yes it is

Christina: apparently they are ~^~^art^~^~^~ installations and not like, for sale?

Stef: I know they’re Ikea loveseats so like the bar isn’t high, but none of them look pleasant to sit on. Which one would you say is the scariest one?

Christina: something about the ace one feels like it is going to swallow you into another dimension?
Which… could rock?

Meg: the fact that the bisexual couch has erasure written on it and also creepy hands covering the armrests is deeply terrifying

Heather: oh my god is this why all caps NOBODY BELIEVES YOU is trending on twitter?!

Stef: it is, yes
that is unfortunately how I found it

Meg: I hate it
THE COUCHES ARE HOMOPHOBIC, BOB FROM IKEA

Rachel: I like seats as a verb here
love wins? love SEATS

Meg: love needs to sit down

Rachel: the most homophobic part is that we all have to work today when i could instead be doing bits about these couches for a solid 8 hours

Stef: yeah probably someone was like “you all need to take several seats” and someone in a boardroom was like WAIT I HAVE AN IDEA

Christina: i keep seeing all these QRTs of what I can only imagine are 16 year olds like “EXCUSE ME THESE CREATORS ARE QUEER, THIS ART MATTERS”

Stef: I do appreciate the video of like an actual asexual person sitting on the asexual couch talking about how much community they feel

Christina: I will say, that couch is the most I have liked the lesbian flag colors, maybe ever?

Stef: the asexual geode is made of some kind of like, tulle?
in my last apartment in bushwick the mold in the bathroom ceiling was so bad we had mushrooms growing in there, i imagine that is the origin of the progress couch

Valerie: the genderfluid couch looks like the map at the beginning of a fantasy novel. which isn’t a necessarily a bad thing but seems unrelated.

Stef: those two have very strong “i forgot to do my homework and half assed it during homeroom” energy

Rachel: it is… fur? but also plaid?

Valerie: the lesbian couch looks like it’s from a DIY tiktok for how to modernize your hand-me-down couch with kool-aid and paint rollers

Drew: Why do trans people get two?
What did we do to deserve that??

Stef: the one with clouds is kinda like a baby mobile? like it’s for a nursery
oh i zoomed in on the art in the other

tag yourself i’m the three flowers surrounding a boot???

Ro: Is it just me or is there a weird amount of explicit binary imagery depicted on that couch??

Drew: When I haven’t shaved my hands for a couple weeks 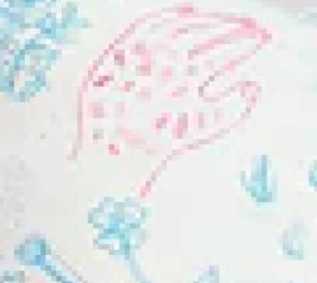 Valerie: I thought they were child drawings before you zoomed in! I assumed it was trans kids and trans adults! alas!
WHAT IS THAT HAND

Valerie: Does that one person have rabbit ears?

Meg: why do the sun and moon have legs and arms
this is so distressing

Drew: Common side effect of T

Stef: this does feel like, ok if you asked a cis person who doesn’t know any trans people to come up with some relatable art
“what are they into? butterflies? disco balls?”

Meg: just put some keys and plants on there, it’ll make sense

Nicole: the trans couch is giving me country store gift shop energy, do you know?
like a designer just putting everything they can think of onto a textile pattern

Stef: yes like if nobody told you this couch was to represent trans people
and you saw this couch

Meg: oh totally, I could see it in the Vermont country store in front of a window with frilly lace curtains

Stef: your aunt would buy it
I googled one of the artists and found this interview

[Q]: Who or what has been a strong influence on you throughout your life?
[A]: One of the more life-altering influences has been my sister; being Goth, she has always been the most genuine person.

Drew: WHERE IS THE GOTH COUCH

Stef: where is MY representation

Christina: My sister being goth
opened my EYES

Stef: I hope my brother tells people the same thing all the time

Ro: Goth is actually the “G” in LGBTQ and WE HAVE BEEN ERASED.

Meg: my rage, it is boundless
give us the goth love seat

Stef: I’m on my goth couch right now
I am a little sad it doesn’t have a harness like the nonbinary couch, seems like it should right?
my couch went to bound on friday

Meg: yeah I think I need my goth couch needs a harness, or at least a harnessed pillow

Stef: oh there it is
maybe the black feathered cushion like the two spirit couch

Meg: ooh yes
throw a harness on it and you’ve got yourself a goth couch