This post was written by Riese Bernard, Carmen Phillips, and Heather Hogan.

On Wednesday July 8th in the afternoon, singer/actress Naya Rivera took her four-year-old son Josey Hollis Dorsey to Lake Piru and rented a pontoon boat. At 5 PM, her son was found alone in the boat by another boater, and eventually was Ventura County Sheriffs’ deputies. He told them that his mother had jumped in the water and not come back up. He was wearing a life jacket, and an adult-size life jacket remained in the boat. People looked for her body for a long time but then it got dark. Her last Instagram post was of her and her son, with the caption “Just the two of us.” 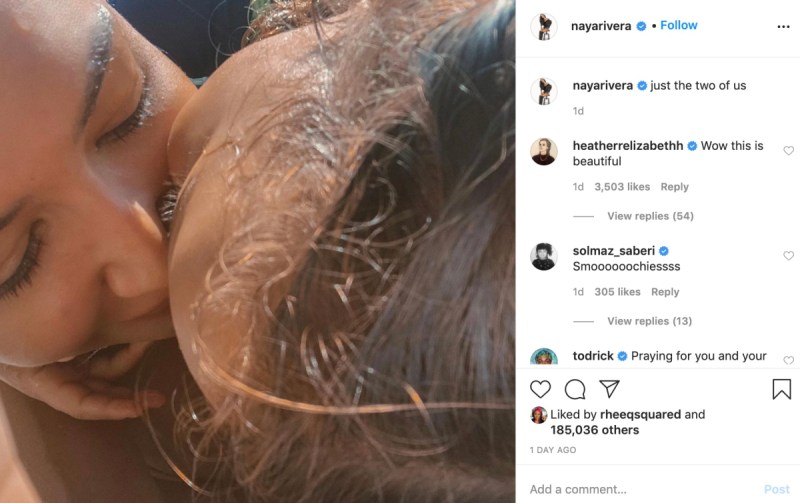 Over the last six days, local Ventura authorities have engaged in a detailed and thorough search and rescue mission, using sonar equipment to counter the lake’s poor visibility, along with dive teams, helicopters, and searching on foot through all the cabins and shore neighboring the lake. Rivera’s parents and ex-husband, Ryan Dorsey visited the lake in person over the weekend, mourning and helping the search as needed. Online, her cast mates encouraged fans to keep praying and Heather Morris went as far as offering to help with the search herself — anything to bring “our Naya” home.

This morning, her body was finally found. A photo, taken by Rivera, sent to her family shortly before her disappearance, aided in her recovery.

Although the exact circumstances of her drowning are currently unknown, a 2000 Los Angeles Times article about Lake Piru cited multiple recent drownings in the lake. Park officials told the paper that “the lake’s swimming beach is clearly marked and other parts of the lake are posted off-limits to swimming for grim reasons.” A user on twitter remarked, “please never come to Lake Piru to swim!! I lost my prima at an extremely young age while she went out for a swim when a sudden whirlpool dragged her 6 feet under.”

Naya Rivera is best known to all of us here for playing Santana Lopez on the teen musical comedy Glee, a program we covered with mild enthusiasm for about1.5 seasons and then, following Santana coming out as a lesbian; with obsessive, rapt and breathless attention. 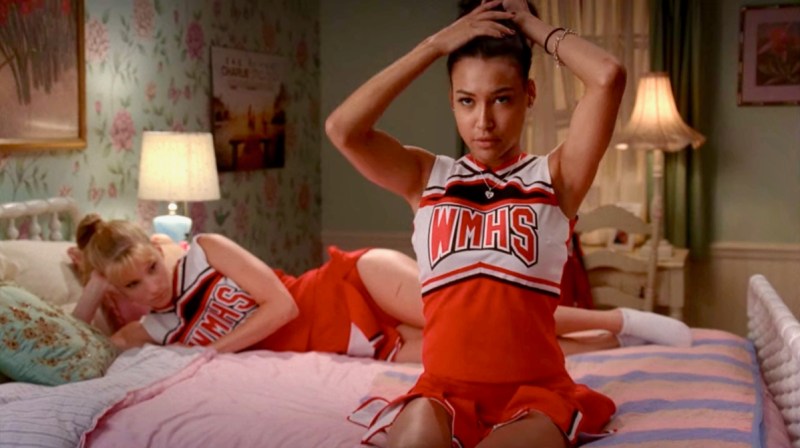 Rivera was born in Santa Clarita, California in 1987 and grew up in and around Los Angeles. The agent of her mother, a model, took Rivera on as a client when she was eight months old. Rivera appeared in Kmart ads as a baby, and continued acting throughout her childhood, with small roles on shows like The Fresh Prince of Bel-Air and Family Matters. She struggled with an eating disorder as a teenager, comparing herself to Brittany Murphy’s character in Girl Interrupted in her memoir Sorry Not Sorry. In the 2000s, she did 11 episodes of The Bernie Mac Show and spots on CSI: Miami and 8 Simple Rules before landing the legendary role of Santana Lopez on Glee in 2009.

Santana Lopez became nothing short of an icon, but her rise in an overcrowded cast of couldn’t have happened without Rivera’s sheer determination and work ethic. Heather Hogan, Autostraddle’s Senior Writer and TV Editor, covered the Glee for both our website and another, and when asked for a comment she shared, “In my 13 years of writing queer TV criticism, I have never experienced anything like what Naya Rivera did on Glee. Santana Lopez was a tertiary character, created for one-liners and bitchy smash-cuts — but Naya Rivera was a firecracker, a superstar, a singular talent who simply could not be relegated to the background.”

Like perhaps many of you, Santana Lopez’s coming out scene was the first I’d ever seen on television where I could see parts of myself in her story:

It seems like — with respect to coming out stories — most girls saw a door. Maybe you had gone in but kept it a secret, maybe you stood it front of it every afternoon debating whether or not today would be the day you’d enter. Maybe you opened and closed it constantly, or gayly dashed back and forth through it. Maybe your family or friends were blocking the door.

But some of us never even saw the door, even with nobody blocking it, and once it was opened we fell straight in. A friend opened that door for me. I never, ever, ever in ten million years, would’ve opened it myself.

This scene, I think, is when Holly opened that door for Santana.

It was a storyline that came out of fandom, a throwaway line between Santana and her best friend Brittany S. Pierce. Santana declares “sex is not dating” and Brittany replies “If it were, Santana and I would be dating” — the moment was seized upon by Glee fans, who began lobbying for a full-fledged romance. And, we got it.

As we shared stories of our time working as writers and editors in fandom, Heather reminisced: “When fans latched onto the idea that Santana and Brittany were a couple, Naya didn’t deny it or refuse to talk about it or shy away in any way. At the time, in 2010, I could hardly get any actresses playing queer roles to do interviews with the gay website I worked for. No one wanted to be ‘typecast.’ No one wanted to be ‘stuck’ playing a lesbian for the rest of their career. But here was Naya Rivera — in a time when presidential candidates still didn’t believe gay people should be allowed to marry, and Don’t Ask, Don’t Tell was still flourishing, and California voters had revoked marriage equality by ballot referendum — leaning into this queer on-screen relationship, fanning the flames, encouraging her fans to ask for more. It paid off. Santana Lopez became the first lesbian character I ever saw come out because of popular demand, and Naya inhabited her with vulnerability and passion and ferocity and hilarity and hope and just so much love.”

In the early 2010s, Autostraddle Deputy Editor Carmen Phillips was one of those fans. “For me, it was the following season — after Santana came out to Brittany — when she came out to her abuela. I remember the Dominican flag on her grandmother’s fridge so clearly. I sobbed. A little over a month later, I finally came out to my Mom. Santana was a teenager, but Naya and I are less than a year apart in age. It made a difference for me that she was a mixed race, Black Puerto Rican actress. That photos splashed across her Instagram of her family reminded me of my own. There was very little queer representation when Glee was most popular, but even less representation for Latinas. We had Santana Lopez and Callie Torres. Naya Rivera and Sara Ramirez — that was it.”

For Heather, the power of that community was like none other before then, because the technology itself had changed. “It’s common now, but Twitter was new then, and we crowded around our TVs every week, live, to watch Santana Lopez sing and brood and drop hard truths and dance and refuse to apologize for who she was, and also occasionally to slap a man who deserved it. We came together with a #GaySharks hashtag and we became a family, because Naya Rivera helped us make space to do it.”

Santana and Brittany would eventually marry in a double wedding with fellow classmates and equally legendary gay couple Blaine and Kurt, because that’s what happened on Glee. Santana Lopez was also in the series’ best mash-up ever, Rumor Has It / Someone Like You. One of Santana’s most beloved performances, a highlight of the Glee Live Concert Tour, was “Valerie,” by Amy Winehouse, who died at the age of 27.

Rivera, who maybe possibly hinted that she was bisexual on The View one time, also did work for GLAAD and The Trevor Project.

From where we are now, it’s almost hard to believe how much has changed in our media landscape, so quickly. There was a lot that Glee got wrong, but it certainly also encouraged us to dream for more. It’s in this moment, maybe more than most, Heather reminds us that the best of Glee and the gifts that Naya Rivera gave us don’t end here: “It’s been a decade since Glee changed the landscape of TV, but Santana inspires as much debate and adoration as she did ten years ago. We think of her when we hear ‘Landslide,’ even if it’s Stevie Nicks who’s singing it. When Adele sings ‘Rumor Has It,’ we bust in with ‘Someone Like You.’ When someone mistakes us for straight, we text our friends about it and they text back, ‘The only straight I am is straight up bitch!’… I believe, firmly, that the only lesbian TV character as influential as Santana Lopez was Ellen DeGeneres, and that character would never have existed without Naya Rivera’s advocacy and support. Through Santana, Naya made us braver, stronger, and absolutely unwilling to settle for representation scraps. There will never be another Santana Lopez. There will never be another Naya Rivera.”

Naya Rivera is now the third Glee cast member to die in their 30s.

Mark Salling, who was 27 when he began his role as high school junior Noah Puckerman on Glee, committed suicide in 2017 after being charged with possession of child pornography. Cory Monteith, who played Finn Hudson, died of a drug overdose in a Vancouver hotel room in July 2013 at the age of 31. Today also happens to be the 7th anniversary of his passing.

I’ve been thinking about a lot of Naya’s performances today — the ecstatically queered “I Wanna Dance With Somebody” duet, the heartrending “Mine” cover delivered to Brittany in the back row of the Glee room —  but there’s one I keep coming back to. Episode 503, “Quarterback” (the episode devoted to Finn’s death). “If I Die Young.” It’s a stripped-down number — just her, backed by acoustics, in front of the shocked, sad Glee Club.

She starts: “If I die young bury me in satin / Lay me down on a bed of roses / Sink me in the river at dawn / Send me away with the words of a love song.”

Almost at the end: “Sink me in the river at dawn, send me away with the words of a love song.”

A few verses in she breaks down crying, she can’t finish, she leaves the room.

But somewhere in the middle, she sang this: “the sharp knife of a short life.”

This piece will be updated as we learn more.