Howdy hey, kids! I’m taking over for Riese this week because she is at A-Camp, where I assume she is wearing flannel, hauling firewood, maybe riding a bear or drinking a quality beer. Pour out a quality beer for me, Riese. Actually, I’m cheap and broke and I hate beer, so go ahead and drink that one.

I’ve probably rewritten this one about a dozen times. Initially, I was psyched for the opportunity to recap Glee because I hate Glee with an all-consuming passion. Like if you said I could either put my face into a bag of bees or watch an episode of Glee, I would willingly dive into the bee bag. I was all set to turn my snark to full blast, giving you a play-by-play of how much I hate everything happening, but then I found out that this episode was the Cory Monteith tribute episode. And then I didn’t really know what to do.

To prepare for recapping this episode, I read a lot of articles about the way in which it was made. The fact that most of the scenes are first takes, because the tears were real and the actors were crying too much to continue, is a hard one to swallow. Watching a group of people grieve their real-life loss under the guise of a fictional one is incredibly uncomfortable, incredibly upsetting, and made me think very seriously about whether or not we can call this kind of thing exploitation. Is there a clean way to go about a tribute episode? How do you honor the passing of the actor without having to put the grieving of his friends and loved ones on extremely public display? Ryan Murphy and Co. has exploited extremely tender subjects before. I want to desperately believe that they wouldn’t do the same to one of their own, but man. Something was nagging me as soon as the first tear was shed in this episode, and it didn’t quit.

The episode opens on the latest incarnation of New Directions singing that song from Rent that every theater kid you knew in middle school was super into.

Maybe I don’t like Glee because I never was into the theater kids? I was too busy teaching myself Sindarin and slurping through my braces, so obviously I was too cool for their shenanigans. The old members of New Directions join in the song, with Mercedes taking the lead. It’s really lovely, and I’ll take this time to say that all the songs in this episode are great. Every performance feels like it was dredged up from an incredibly deep part of the person, and it hits you pretty hard each time. Again, it’s uncomfortable for me to talk about how intense and beautiful these performances are because it feels like watching someone sing at a funeral. Actually, it’s meant to feel that way, because these actors are portraying characters who are singing for their friend’s memorial. 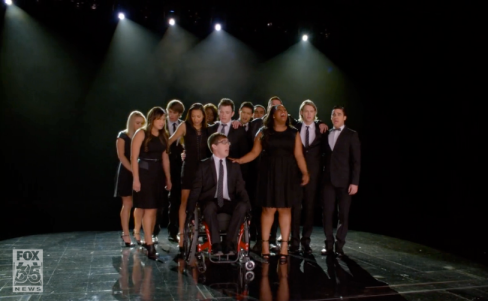 Kurt is getting ready to return to Lima, where everyone is gathering to collectively mourn Finn in a Shue-organized memorial. It’s implied that the memorial is too much for Rachel to attend. Kurt says that Finn died three weeks ago, and that despite everyone talking about his cause of death, it’s no one’s business. I have a lot of thoughts about this, as did everyone else who saw the show, I’m sure.

So. We don’t get to see the cause of Finn’s death or the character’s initial reactions to his passing, which is in some sense a very smart decision, and in another sense, a very strange one. The specific way in which Kurt chooses not to say how Finn dies makes it sound as if they’re trying to align this situation with the cause of Cory Monteith’s death, which is… uncomfortable, to say the least. While it would be highly uncouth to make this episode about how Cory Monteith died, it’s actually really strange to not talk about how a fictional character has been removed from the narrative, especially by something as serious as death. And I know, this is the episode in tribute to Cory Monteith, but it’s technically also an episode in tribute to a recently passed Finn Hudson, and the constant complication of those two identities made this episode hard to watch for a lot of reasons. Cory was a real human being who was not Finn Hudson, no matter how much his performance may have been influenced by his own experiences or traits. I’m not sure this episode always remembers that, and it’s hard to watch.

If the point of Glee thus far has been using song and dance to work out any number of “after-school special”-worthy issues, the premise of their tribute episode aims to be consistent. This will be the main theme of this episode: we, the viewers, watch the actors crying while other actors do sobworthy things, while we, the viewers, know that the actors are crying real tears in reaction to a real event. I feel incredibly uncomfortable letting anyone see me cry, and I feel super fucking uncomfortable when people around me cry. Cue forty minutes of watching real people crying real tears while having to act out a scripted scene with occasionally forced jokes? My shoulders could not handle the cringing and eye contact avoidance that was due. 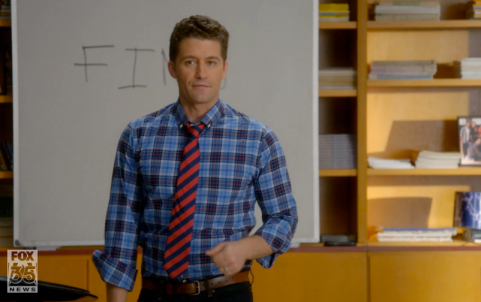 We learn that Sue has planted a memorial tree where she caught Finn and Quinn fondling each other, and everyone thinks she is a soulless piece of trash for doing so. Isn’t that her well-worn character trait, being inappropriately cruel while everyone else is sensitive and shining examples of humanity? Serious, serious kudos to Jane Lynch for her entire performance in this episode. Having to play the character making politically incorrect wisecracks throughout a tribute episode about grief is the hardest role in the book. It’s hard to put your grief out there on camera; it’s harder to have to mask it with a role that doesn’t allow you to break character.

Turns out somebody stole the memorial tree, which seems like a cruel act of vandalizing. Turns out that it’s just Puck, who has taken the tree to a seedy motel where he will copulate with it. I’m just kidding, although there is a weird moment where he looks at it while eating an apple with a knife and in any other episode there would have been a joke about having sex with a tree. Jesus H. Christ, this is a hard episode to recap. Puck’s story in this episode is one that’s meant to be consistent with his characterization thus far, and he rebels and gets drunk when he’s faced with grief, because, as he tells Coach Beiste, he’s afraid if he starts crying then he won’t stop. Also his anxious masculinity is threatened by the weakness implied in sadness and mourning, real men don’t cry, country song lyrics, etc. His eventual breaking down with Bieste is probably the only time in the episode where I felt a little cheesed out, but you know what? The cheese was the eye of an emotional storm, and you need those.

Finn’s family brings the toughest scene in the episode. If you’ve been feeling the emotions tugging at your sleeve, this is where it gets exponentially harder not to let it all out. When Finn’s mother says that she’ll always be a parent, but she’ll never have her son again… that’s a deep line for Glee, who has dropped more scissoring jokes than your least favorite ex. One thing I liked about this episode was that they did go there sometimes, and it didn’t actually feel like “too much.” Was some of the dialogue a little forced? Sure, it usually is. Did it feel incredibly awkward to witness what were definitely some non-fictional breakdowns? Absolutely. But when there were hard-hitting lines about loss and grief in this episode, I was shocked to admit that I got it. I’ve been there. I don’t like to think about the loss I’ve experienced in my life, but there were moments in these forty minutes that literally forced me to reconsider them and compare the actors’ grief to my own and shit, that’s the kind of thing I expect out of an Oscar-winning film, not an episode of my least favorite show of all time. I hate that it was at the expense of the actors’ pain itself, but I never thought Glee was going to take me where it did, and I guess I’m appreciative? Maybe? 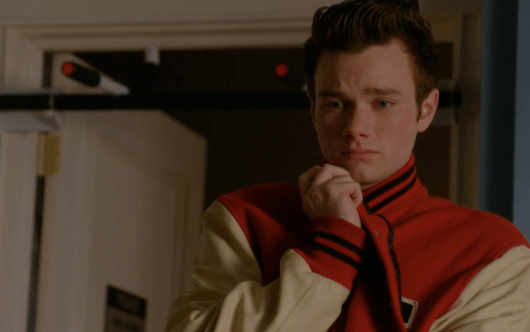 I should say that a few of the shitty things Finn did on the show are glossed over in a way that’s vaguely uncomfortable. I know that death allows us to look back and remember the best of people, for the sake of our own emotional sanity as much as anything else, but it was strange that the conversation that the family reminisces over is the “faggy lamp” scene of all things. Finn was not the best dude. I know for a fact that we in the queer community made angry blog posts about him on more than one occasion. This showed Burt’s character growth, yes, but it was still strange.

Sam and Artie’s rendition of “Fire and Rain” makes Santana need time alone, only to discover Sue trying to take down Finn’s memorial.

She breaks down, screaming violently at Sue and telling her that Finn never liked Sue. Again, knowing how emotional everyone was at the time of shooting, scenes like this make me wonder how much regard the writers had for the actors’ stability. Later, Sue and Santana are allowed a scene in which they make up, although it’s not the hugfest Puck and Beiste had. Instead, it’s truer to their characters, and Sue says some things that eclipse a lot of the other lines they wrote up to attempt to express the other character’s grief. Again, Jane Lynch is doing some high quality keeping it together. Naya’s doing a stand-up job, too. My cynical ass was impressed.

And holy fucking wow, they make Lea Michele come out and sing a song? This is the point when the episode becomes stupidly painful. Is it beautiful? Oh, absolutely. It’s “Make You Feel My Love”, and when Lea Michele starts singing, you realize everything in this episode has been leading up to this moment.

Rachel has lost Finn, and Lea Michele has lost Cory, the person she was going to marry. Coupled with the reaction shots, I know without a doubt this was a room of friends mourning the loss of Cory, not actors in character, acting out grief. 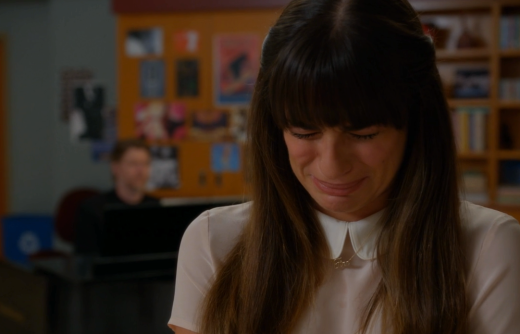 At the very end, it turns out Mr. Shue has Finn’s jacket after everyone blamed Puck. Mr. Shue has been attempting to keep everyone together, which Rachel acknowledges when she comes to Lima, but now he’s breaking down. He has Finn’s jacket, which is… weird for a teacher, let’s be real. Also, he totally joined in on the angrily interrogating Puck thing, so uh, what was up with that, dude? I don’t know. He and Emma have a moment. Against all odds, it’s touching.