If you haven’t already seen My Prairie Home, the musical-documentary on Rae Spoon directed by the oh-so-talented Chelsea McMullan and produced by the National Film Board (NFB), you need to drop everything and go see it right now. The film follows the Canadian singer-songwriter as they tour Alberta on a greyhound bus. Set to the music of Spoon’s new album of the same name, My Prairie Home is an exploration of the complicated intersections between gender, sexuality, music, and Alberta. The film also draws on Spoon’s first novel, First Spring Grass Fire, which we’ve also reviewed. 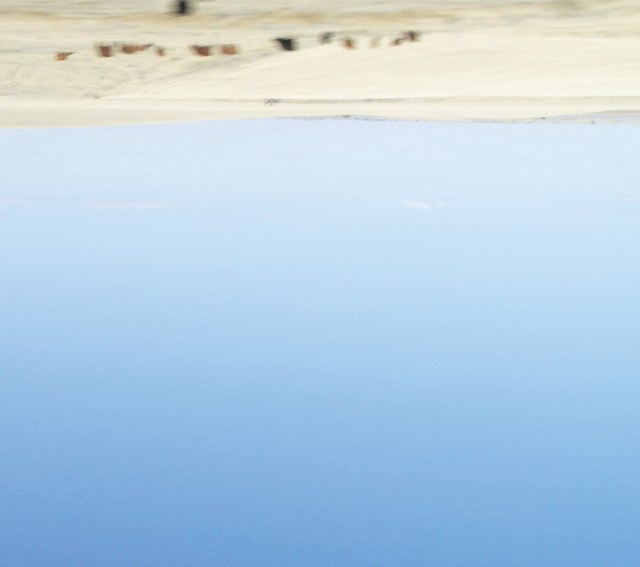 From its very first scene showing an upside down landscape – a vividly blue prairie sky underneath a a sliver of land at the top of the screen – I knew that My Prairie Home was going to be amazing because any movie set in Alberta that starts with a shot of the sky is getting it right. And we all know I have a lot of feelings about the sky.

Alberta is as much of a character in this documentary as is Spoon, and in addition to the sky, there are beautiful, take-your-breath-away shots of the Rocky Mountains, Drumheller, and the Athabasca Glacier. There are many slower shots of both the natural and urban landscapes: an oil pump moves against another bright, blue sky; Spoon stares out of a window for a long time at passing farmland; the camera slowly zooms in on the indifferent expressions of the patrons in a Calgary truck-stop where Spoon has just performed. The slow pace makes sense. Alberta is a province with sprawling cities separated by great distances. We’re used to waiting – for winter to end, for the bus, for the final destination during a long drive. It makes sense that so much of the film is shot from the perspective of Spoon looking out a greyhound bus window. Living in Alberta, you end up spending a lot of time in vehicles. And like Spoon, when I was a kid I spent a lot of time daydreaming while sitting in my parents’ van staring out the window on long road trips to Drumheller or the mountains. In such a vast province with such a low population density, there’s bound to be a lot of silence, which McMullan also poetically captures.

At one point, Spoon sings surrounded by dinosaur skeletons at the Royal Tyrell Museum, where I used to go with my family every summer when I was a kid. It was surreal seeing the background to my childhood summer vacations on an actual movie screen; and I have to thank McMullan and Rae Spoon for bringing Alberta’s beauty to an international audience. 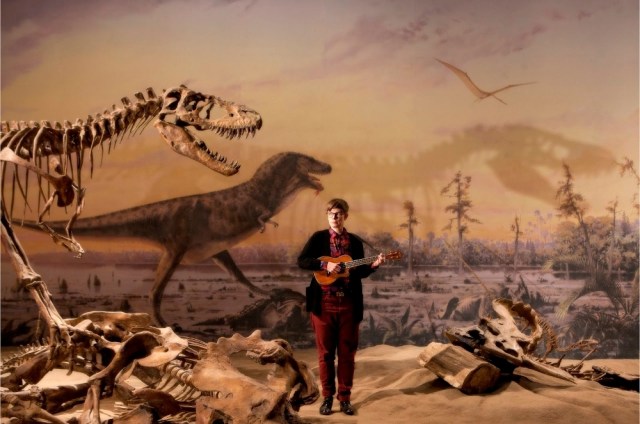 Chelsea McMullan and Rae Spoon met when the latter composed some of the music for McMullen’s first NFB short, Deadman. They became friends and McMullen, who was fascinated by Spoon’s talent and story, felt that the singer deserved more attention. In The Globe and Mail, she said:

“I was kind of sick and tired of seeing so many white dudes with beards who were not nearly as talented as Rae being far more successful. I truly felt like more people just needed to hear [Spoon] sing.”

McMullen got her wish. My Prairie Home recently had its US debut at Sundance, where it was this year’s only Canadian feature. “I was worried that no one would see it, and it would get buried somewhere deep underground, ” MucMullan said. “I was hopeful that maybe it would get a sort of cult following. But I never thought that it would go to Sundance.”

My Prairie Home is more than pretty skies and poetic wheat fields. It’s also about growing up different in a difficult environment and what it means to survive. Spoon speaks with a vulnerable courage about what it’s like to live in a religious household with a mentally ill father. In one of the film’s songs, “I Will Be a Wall,” they sing about being a child in an abusive home, afraid (“Hide the children. Hide the children. A storm is coming”) but also determined to survive (“There are beautiful places that we can hide/ Between the notes and the rhymes/ I sang for my sister on the darkest nights/and I sang for my brothers too.”)

Spoon also speaks about their gender: “When you don’t fit into the gender system people tell you you shouldn’t exist, and you DON’T exist. Well I’m here to tell ya, I exist.” Cut to a scene in a Greyhound bus station with Spoon coming out of a women’s washroom. It’s a powerful juxtaposition – Spoon is happy and confident in their gender identity, but they know when and where to show this confidence. An Alberta bus station isn’t the most queer friendly place. Nor, we learn, was their high school. In probably one of the most adorable scenes, Spoon recreates prom with their actual high school girlfriend, but the two also talk about the homophobia they had to deal with.

As much as it’s a film on Alberta, queerness, and music, My Prairie Home is also, not surprisingly, about the concept of home. Alberta is full of contradictions, and like the upside down landscape in the film’s opening, it doesn’t always make sense. It’s a musical documentary about leaving the place you grew up, a place that’s difficult to love but is a part of you nonetheless. It feels like a love letter to music and to Alberta; but like any interesting love poem or story, it’s not all roses and violets. There are the sad, the difficult, and the painful parts too, but ultimately, My Prairie Home does what good art often does: it teaches us how to survive and find home, wherever that may be.

You can listen to the My Prairie Home album on CBC radio, and it’s also available on iTunes. The film can be rented or downloaded on the NFB website and on iTunes.