Great news from Washington this past weekend, particularly for people living in or involved with one of the 34 states where same-sex marriage isn’t legal: Attorney General Eric Holder has announced that a whole crop of new federal criminal and civil justice-related rights will be extended to same-sex couples across the country.

In his speech at a Human Rights Campaign dinner on Saturday, Holder promised that, regardless of where they’re stationed, all Department of Justice employees will now “strive to ensure that same-sex marriages receive the same privileges, protections, and rights as opposite-sex marriages under federal law.” Up until today, because of the vagaries of legal language, lawyers, judges, and other officials working in states that don’t recognize same-sex marriage have been able to contest gay couples’ marital rights. They can’t do this anymore. As CNN puts it, “a same-sex couple legally married in Massachusetts can now have a federal bankruptcy proceeding recognized in Alabama, even though [Alabama] doesn’t allow same-sex marriages.” Holder signed an official policy memo today.

SAME-SEX MARRIAGE LEGALITY MAP. THERE’S A LOT OF YELLOW ON THIS THING (VIA CNN)

The changes affect millions of same-sex spouses, who can now:

This is, of course, one step in a long road. It does nothing for couples who aren’t fortunate enough to legally marry in the first place. Its implementation will stir up new complexities: what if, for example, a case is tried in a state and a federal court? As Amy Davidson at the New Yorker observes, the existence of these questions — and those that have arisen from similar declarations made by the IRS, the Health and Human Services Department, and the military — “points out how imperfect anything less than a fifty-state solution is.”

But maybe there’s hope yet. This is the latest in a long string of pro-LGBT efforts by Holder, who considers LGBT equality one of “the defining civil rights challenges of our time.” Holder also formed the first DC hate crimes task force, was instrumental in overturning DOMA, and has promised to legally recognize the Utah couples who suffered during their state’s marriage bait-and-switch back in December. In his speech, Holder promised that the DOJ wouldn’t “rest on [their] laurels” and urged everyone to remember that we’re in this together:

“Everyone in this room, and everyone in the LGBT community, must be committed to ending all discrimination — discrimination based not only on sexual orientation, but also on race, gender, ethnicity, and national origin. You must be active in those areas of the struggle as well.” 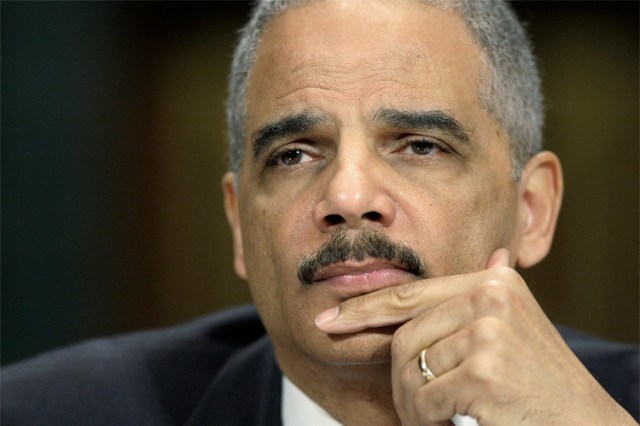 The struggle continues, but it helps when the federal government has your back, at least somewhat in regards to one specific legal right.