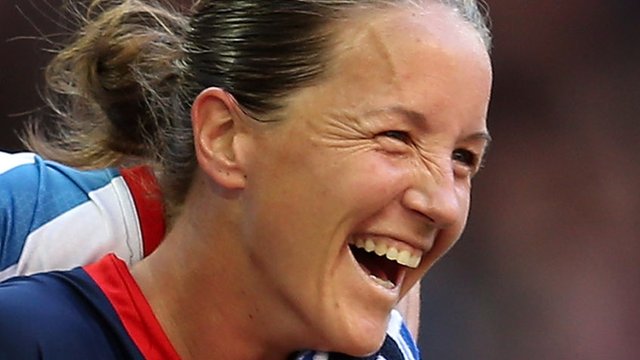 Stoney after scoring an Olympic goal via BBC Sport

Though Stoney has been open about her sexuality within the soccer world, she hesitated to go public, telling BBC Sport, “For the last 10 years… I was frightened of the stereotypes, frightened of being judged, frightened of what other people might say, especially the abuse you can get through social media.” But she continued, “I think I’m in a place where I feel so comfortable in my own skin, I feel so loved by the person I’m with, that I feel I can face anything.”

Stoney said she sees homophobia embedded in the culture of soccer around the world, denouncing the upcoming World Cups in Russia and Qatar for taking place in countries with homophobic policies and laws. Not that we’ve ever seen an international sporting events in a country with anti-gay laws… like Russia… oh wait… 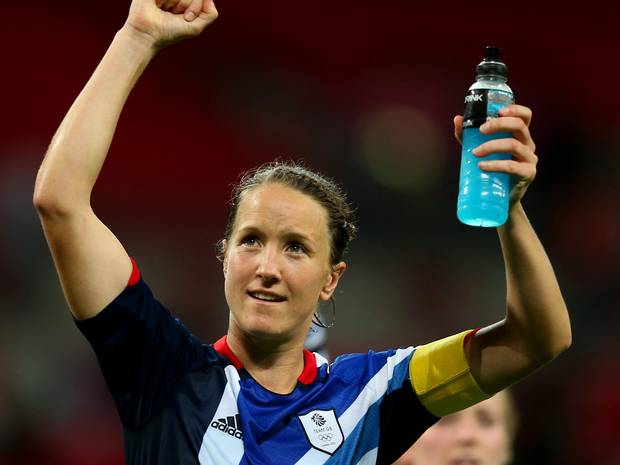 I toast this Powerade to all the gays who wanted Jess and Jules to get together! via The Independent

Stoney’s points to the warm reception given to British diver Tom Daley, who came out in December, as motivation to come out. “I looked at the response that Tom Daley got. It was incredibly positive, and I thought ‘wow the world is changing and it’s time for me to stand up and tell my side of the story.'” Stoney is speaking out about the impact that internalized homophobia has on the individual and the effect that has on the team, positioning herself to be an outspoken advocate against homophobia in the soccer world.

We’ll be waiting to see what more comes as Stoney steps up to be the most visible gay soccer player in Britain. I’m rooting for another gay soccer-themed romcom classic, but more girls and women being down to come out on their soccer teams would be cool, too.