It’s Okay To Feel Intimidated By This Concept

If you’re nervous about all that but still wanna give it a go — do it with the lights off, or dimmed. In fact, you may prefer to always do your synchronized stroking in the dark, regardless of comfort level with the practice overall. Darkness can enable you to really commit to a fantasy and can often help ease self-consciousness. Or you can try it with the covers on, or your underwear on, or with your partner agreeing not to look directly at the sun. Try it on the phone first, and in person later.

As for initiating the encounter, “Can I watch you get yourself off?” or “I wanna see how you touch yourself” are pretty direct intentions. There’s also the option of blushing really hard, saying “what if we masturbated together” super-fast, and then burying your face in a pillow. Alternately, you can cover the topic by filling out this worksheet with your partner that should truly be a legit pre-req for any sexual relationship you ever have, and, if interest is expressed, talk about it.

To Better Understand What Turns Your Partner On

Even if you’re not staring directly into your lover’s abyss or otherwise-identified genitalia, you can get the general gist of things with respect to speed, pressure and attention paid to outside parts vs. inside parts.

Because You Can’t Come, But Want To

Maybe she says her jaw isn’t tired but you’re 100% sure that her jaw is very tired because it’s been 45 minutes and you’ve gotten to the edge of coming so many times without actually coming that you’re officially psyched out beyond redemption. Meanwhile, she’s wet as a summer storm. This can be a good time to just call it off and do a little handiwork as a team!

Orgasms should never feel like a necessary component to a sexual encounter, but if you want to have one and you can’t, doing it your own self is right there for the taking. If you’re somebody who has a hard time reaching orgasm with a partner, even just being aware that finishing yourself off is an option can relieve a lot of pressure.

If you and your partner want to come at the same time, having total control over your own situation makes it a lot easier to coordinate a simultaneous orgasm.

Just being totally hypothetical here — you and your girlfriend are in a parking garage after an unexpectedly erotically charged visit to an art museum and you’ve got maybe fifteen minutes to drive to the restaurant where you’re meeting up with the people you were just at the museum with. You want to have sex but there’s no time or space or privacy to do so, so you try straddling and grinding but you’re very conscious of the people walking by, and you try having her hand down your pants but your pants are really tight and you know what, what if we just took care of ourselves while talking about what we’d like to be doing instead! Problem solved.

You Don’t Want To Be Touched

Sam reports that “mutual masturbation can be SO fun and SO kinky and has also been helpful to me as a person who doesn’t always want their body touched by a date/hookup.” There are so many reasons why a person might not want anybody else’s hands or mouth on their genitals — you’re on your period, you have dysphoric or otherwise complicated gender feelings, you’re dealing with trauma, you have a yeast infection or BV, you haven’t showered in five days — but you still might want to get off. Sam continues, “Getting off during sex/a scene is important to me and it’s nice to know that I can still get off even if I don’t want to be touched a certain way or take off certain clothes and it’s still sexy to everyone involved.” 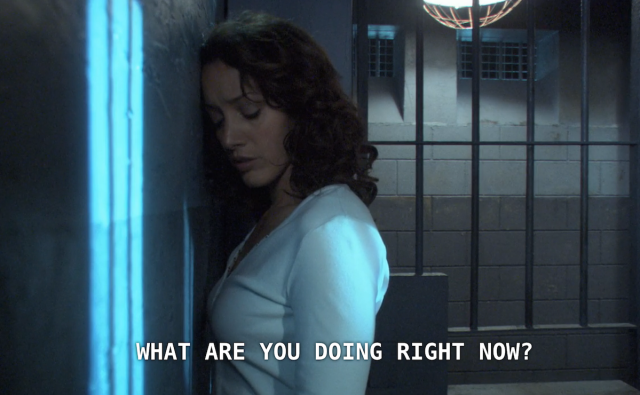 [It still counts as cheating though, Bette.]

Lesbian Sex 101 is Autostraddle’s series on how to have lesbian sex for queer women and anyone who finds this information applicable to their bodies or sexual activities. Employment of the term “lesbian sex” in this post uses “lesbian” as an adjective to describe sex between two women or people who identify with that experience, regardless of the sexual orientation of the two people involved.