Welcome back to Orphan Black! Previously, four sestras joined forces to wage war against a faceless shadow determined to rip away their autonomy/destroy their lives, which looked like: Sarah Manning tracking down the Big Bad behind their cloning, beheading it, and watching helplessly as three other Big Bad heads grew back in its place; Alison conquering her booze-fueled bender habits and teaming up with her husband/former monitor to murder anyone who got in their way and bury their corpses under the garage; Helena eating a lot of candy and falling in love and trying not to get kidnapped and getting kidnapped and having her eggs harvested against her will and getting kidnapped again and also eating more candy; and Cosima researching a cure for her Leda Lung Syndrome while hovering near the edge of death while making out with her wicked smart and supernaturally beautiful girlfriend. Also, some boy clones came into play.

It’s a bright sunshiney day in Toronto, and Helena’s sisters are throwing her a baby shower. That is a lie. Helena is trapped in a crate, but she is dreaming of this baby shower and it is the sweetest and silliest and saddest thing you have ever seen in your entire life. 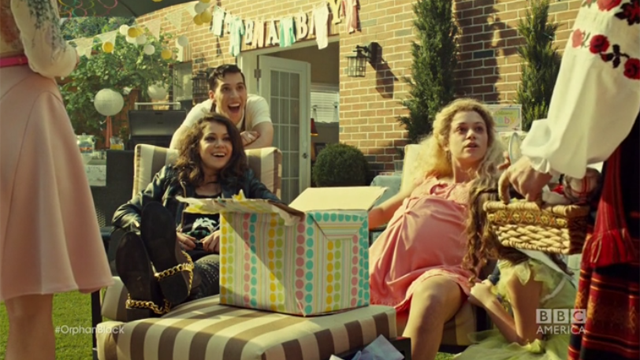 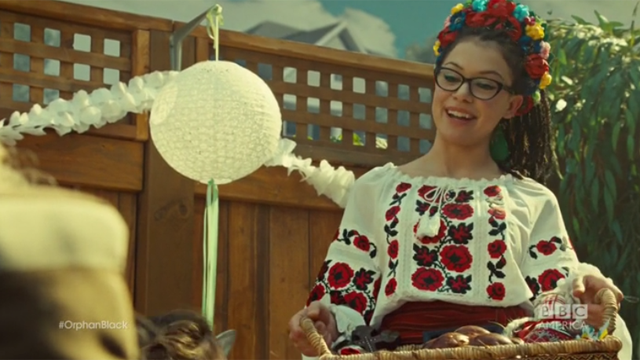 It’s Helena’s heightened, perfect reality and so all of her sisters (and brother-sestra) are outlines of who they really are, with Helena’s imagination coloring in the rest. Except for Sarah. Sarah is spot-on because Helena knows Sarah better than she knows herself. So Sarah needles Helena about being a meathead, and Alison has crafted literally every baby thing off of Pinterest (baby clothes and toys and cupcakes), and Kira is a fairy and very excited about the new monkey Helena is growing in her belly, and Felix is dressed like if Mad Men were a gay Disney movie and he was the Don Draper. While he grills marinated ox liver and babka, Cosima shows up dressed like a Ukrainian festival holding a basket of Ukrainian delicacies and talking about, “I’m way better thanks to science!”

Well, but like I said, Helena is actually stuffed in a wooden box, sitting in a warehouse. She wakes up and freaks out, and then, of course, a giant scorpion crawls out of her dress and starts chatting her up. The scorpion sounds like Marcel the Shell, but guess what? It’s played by Tatiana Maslany too. (The voice, I mean. That’s not Tatiana Maslany in a scorpion costume.) (Or maybe it is. Wonders never cease on this show.) The scorpion tells Helena she’s being tested again, and for some reason, this calms her right down. Also, he has a name and it is Pupok. 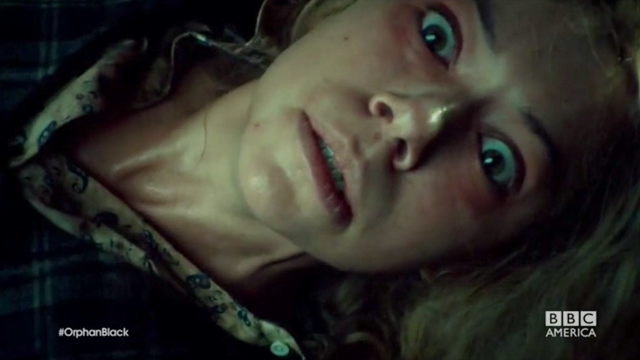 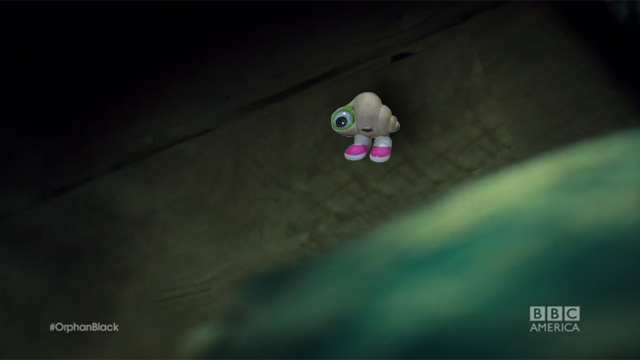 I hang glided in here on a Dorito. 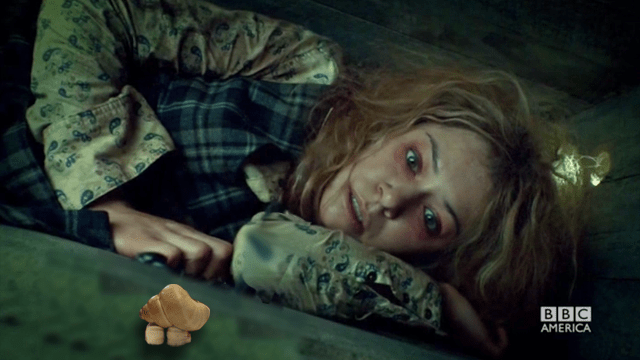 If someone doesn’t take Helena out for ice cream and also to fucking Build-a-Bear by the end of this season, I am going to have a fit.

Down by the river where Felix once hosted a fake funeral for Sarah, the two of them and Kira hang out and drink beers. 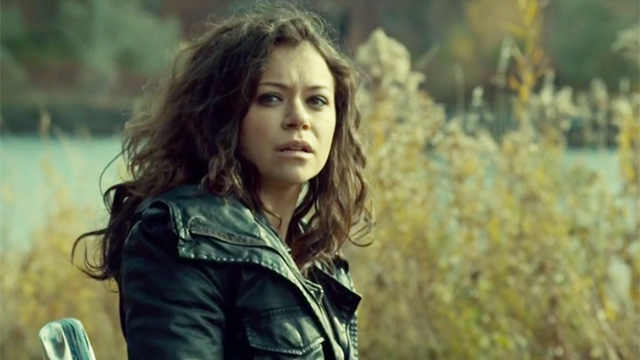 Neither boss ass bitch can live while the other survives. 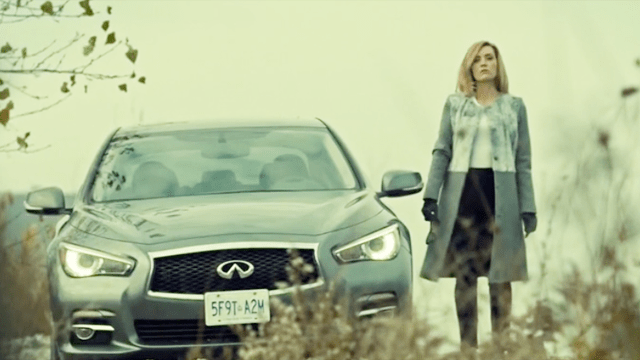 That’s the opposite of feminism. Get in the car.

Felix: Kira, you don’t keep getting kidnapped by a many-tentacled leviathan that wants to disassemble your entire body. Why don’t you run off into the tall grass and play by yourself.
Sarah: It feels good to sit here and drink these liquors and not have anything to worry about.
Felix: I mean. Everyone you love keeps getting stalked and murdered by a seemingly infinite number of interchangeable straight white men with unknowable allegiances, but okay.
Sarah: Dude, I told you. Marion, that lady with the boy clones locked up in her basement and the tiny me-clone who lives in the cupboard under the stairs, she’s going to take care of us. She controls Topside and Topside controls DYAD and DYAD controls the people who keep killing us.
Felix: Sure thing. Hey, who’s that dark angel in the luxury sedan? Ah. Right. Delphine.

Delphine’s hair is straight now, but her swagger is not. She summons Sarah to DYAD to talk about the new ways she and her sisters are going to get killed to death this year. For one thing, Rachel — who is at this facility having surgery to remove that pen that was jabbed in her eye — is going to come after Sarah like a perfectly manicured wildcat, okay? And now Project Castor is in the mix. It turns out the boy clones are kidnapping the girl clones, as evidenced by a hotel surveillance video of a new Leda clone named Krystal making out with and then getting snatched by a Castor clone. Delphine wants Sarah to talk to Rudy, the Castor clone in captivity, and game him into spilling some secrets. Sarah wants Delphine to talk to her girlfriend. 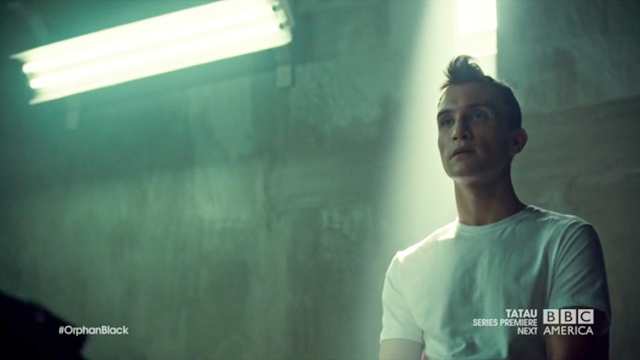 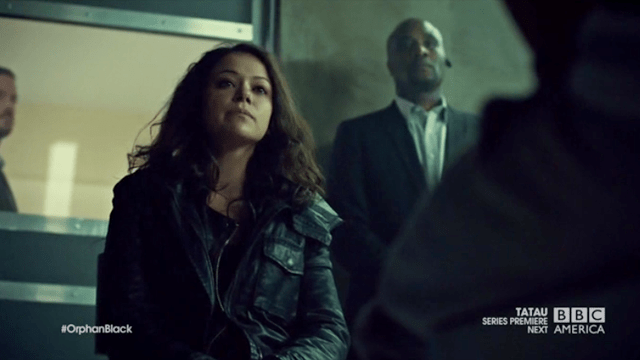 Sugar and spice and fuck you.

Sarah: Hello, I am here to discover your secrets.
Rudy: I am here to leer at you and speak in riddles like a perverse Willy Wonka.
Sarah: I kicked one of your brothers in the face with my industrial punk boots, is a thing you should know before we get started here.
Rudy: That’s just one of the reasons you’re our favorite. The other, of course, is your functional uterus. If you’ll lean close enough for me to strangle you with these handcuffs, I’ll whisper some secrets to you.
Sarah: You can suck a camel nut. I only trust my sisters.
Rudy: Oh? You don’t trust DYAD, whom you’re now working for? DELPHINE, DON’T PRETEND YOU DON’T SEE ME, GIRL! I KNOW YOU SAW ME!