Welcome back to Boobs on Your Tube! On Legends of Tomorrow, Ava and Sara were separated yet again when Sara got stuck at a bowling alley in the sky and Ava got lost in a sea of wedding dresses. We cannot stop talking about these vaguely lesbian mean teens on White Locus and whatever their whole deal is. Good Trouble celebrated Lunar New Year with a groundbreaking episode of storytelling, and Natalie talked with Sherry Cola about the show, queer Asian love stories, and making her mom proud in an interview that is absolutely not to be missed. Heather watched Fantasy Island and was pleasantly surprised to find out it’s a queer magical story and not a reality show (even though it definitely sounds like a reality show). And Carmen won’t let it go, it’s time to give Harley Quinn a girlfriend in the movies already!

We have so much Generation Q content for you! First of all, To L and Back recapped the first episode in podcast form, and now Riese has already done a recap of the second episode in written form! So pick your favorite genre! And finally, we also made you an Astrology Big Three Meme featuring all the L Word Characters so go ahead and have a lot of fun with that one!

+ Still nothing much to report re: Roswell, New Mexico, except that Isobel realized she’s an empath, which is pretty queer if you ask me. — Valerie Anne

+ I won’t lie to you, I have given up hope on In the Dark. I am trying to keep tabs on it for you, dear gentlereaders, but my heart’s not in it. Jess has spent this whole season kidnapped, and the whole last episode presumed dead, only speaking in Murphy’s hallucinations. Eventually it was revealed that Jess was rescued by her one lady kidnapper who took a liking to her and taken to the hospital to treat her burns…but then she ran away from the hospital despite being gravely injured. So she’s still separated from her friends and in more danger than anyone. :rolls eyes tiredly: — Valerie Anne 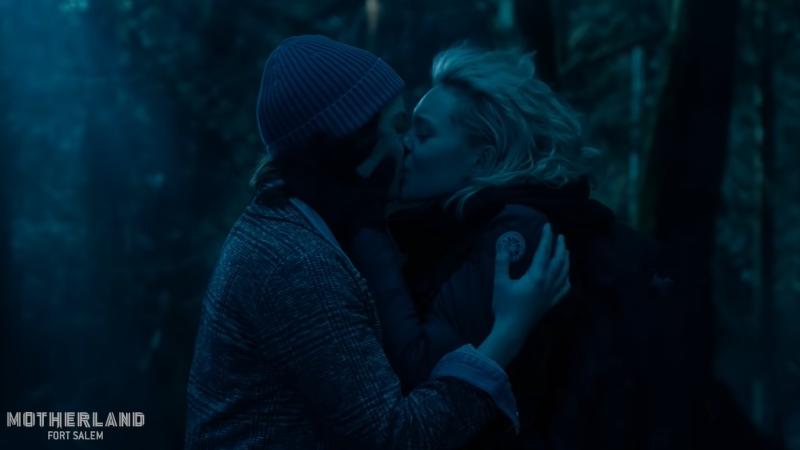 Blue IS the warmest color.

This week begins with Scylla not straying far from Raelle’s bedside while Abigail laments the presence of someone who worked with the Spree. When Raelle comes to, Scylla tries to defend Willa’s choice to fake her death, and tries to convince Raelle that her priorities have shifted since she first joined the Spree; she thinks her goals are more aligned with the trio’s now.

The trio is sent on a mission to take down Nicte, the head of the Camarilla, and Scylla says she’s not leaving Raelle’s side, so despite Abi’s resistance, the trio becomes a foursome.

Of course, Nicte doesn’t make it easy. First the witches encounter their worst fears, then they find a cabin that is empty besides dead bodies and bats overhead, screeching and screeching, until Raelle, Abi, and Scylla are all at each other’s throats and Tally is storming off.

Tally finds Nicte in the woods and by the time her team finds Tally, it seems she has knocked Nicte out; but as they muzzle Nicte and she comes to, her eyes get wide like a scared puppy and she starts to struggle in a desperate way that’s not very leader-of-the-extremist-sect-of-an-extremist-cult-like.

On the way back to the chopper, Raelle tries to apologize to Scylla for things she said in the cabin but Scylla has already forgiven her. Scylla can’t go back to the school with them, so she’s going to go help the little witch she rescued, and Raelle tells her to take her to her dad, so Scylla is really going to get the whole meet-the-parents experience. Raelle starts to leave two separate times before finally giving in and rushing back for a goodbye kiss in the soft light of the evening and the rushing wind of helicopter blades. It feels joyful; a reunion and a goodbye-for-now all in one.

When they get back to the school, the thing I had been yelling at them since the woods is revealed: Nicte stole Tally’s face. So they seemingly caught the enemy but there are still two episodes left so surely there’s plenty of stress left to reckon with.

If you recall, Nicole — Jukebox’s very rich, white Upper East Side girlfriend — is not a fan of Juke boosting stolen designer threads as a source of income. However, Jukebox is trying to save up for studio time, and it’s not cheap! When Famous (a friend in Juke’s crew) gets a hookup from his older sister for the studio work Jukebox desperately needs, the pressure is on.

First Juke asks her Uncle Lulu for the same hookup that Famous got. After all Lulu is a lieutenant in their family business, he definitely has the money. Even though Lu loves his niece more than anyone in the world, there’s two problems with this plan: 1. He doesn’t believe in owing favors, and he wants the same kind of freedom for her, and 2. His brother — Marvin, Juke’s father — would never allow him to give Jukebox the cash, because it would some kinda stupid threat to his masculinity as a provider or some shit like that. (Aside: Marvin is a forever fuck up and his relationship with his daughter is super precarious, they haven’t explored it yet, but something is definitely not right there and it’s clear his family helps raise Jukebox as a community to help cover his shortcomings)

Unable to get the financial support, Jukebox returns again to stealing. Ralph Lauren “suicide” bomber coats are so hot right now she only needs one to make the money she needs. This time however, she gets caught, and is only able to get away with it because the security guard who stops her is the same one she saved in a violent attack last week.

Later, when Juke tells this whole ordeal to Nicole from the safety of her Upper East Side bedroom, Nicole promptly calls it karma. Juke did a nice thing, and it came back to her. What Nicole doesn’t get, however, is all the excitement over these Ralph Lauren coats. Modeling it in full-length mirror, she remarks it just looks like a regular coat to her.

Jukebox sits up in Nicole’s bed and takes in her girlfriend. Suicide bombers look normal to Nicole because they were made for her, Juke explains. But for people who aren’t born rich, who aren’t born white — it means so much more. Ralph Lauren was born Ralph Lifshitz in The Bronx. He turned a fantasy of a life he didn’t have access to into a worldwide brand. That’s the point.

Juke is gonna stop stealing, it’s not worth the hustle and it’s not how she wants to get where she’s going next. But she does want Nicole to keep the jacket — and think of her every time that she wears it.

grown-ish 406: “Put Your Hands Where My Eyes Could See” 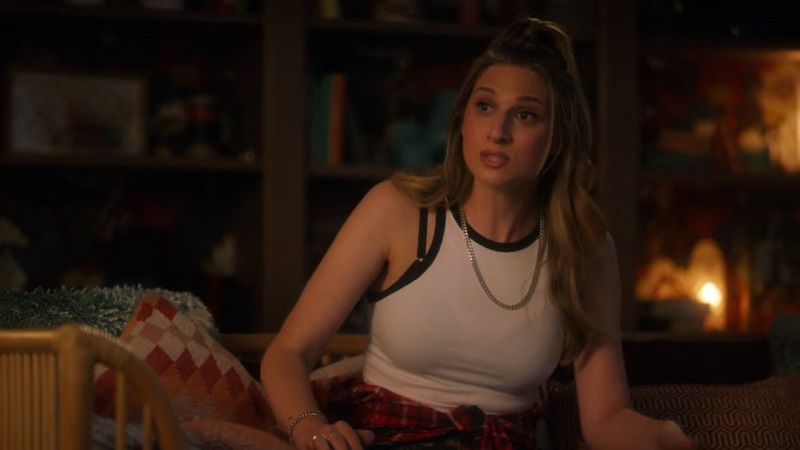 Over the last two weeks, grown-ish has added its name to the shows attempting to address the country’s racial reckoning on-screen and, like nearly every show that’s come before it, the results were mixed. That said, to the show’s credit, it does a thing that few others have endeavored to do: allowing the audience’s view of the central character to change (however temporarily).

Most shows, when they want to showcase a person being racist, introduce a new character or reserve that part of the script for an ancillary character (see Isaac Zakarian on Gen Q). Eventually, we’ll get the racist called out for being racist — which, yay, that’s a dopamine boost — but by reserving racist behavior for a person that the audience isn’t invested in, the audience is never forced to do any self-reflection. They’re never asked to imagine themselves as the racist. grown-ish takes a different tack.

Protests have erupted across Cal U after the shooting of yet another unarmed black person and, of course, our crew are at the center of it all. When the county enacts a curfew to quell the protests, the group disperses: with Zoey, Jaz and Nomi returning home while Aaron, Luca and Doug continue protesting downtown. At home, the girls follow along with the protests on social media. Nomi laments how dangerous things have gotten, particularly when compared to the peaceful women’s march, but Zoey reminds her that the stakes are different. Jaz questions how committed Nomi is to the cause if she abandons it when things get real which earns an immediate pushback.

“No, I’m absolutely on the cause, Jaz. I just don’t understand why those people think that looting is the answer,” Nomi responds. “Those people” earns an instant look of dismay from Zoey and Jaz and leads to a conversation wherein Nomi prioritizes livelihoods of small business owners over actual black lives. Zoey calls out the focus on looting and rioting as a part of long tradition of racist thinking which Nomi hears as Zoey calling her a racist. She gets defensive and chastises Zoey for saying a thing that she absolutely didn’t say. Later, Jaz and Zoey invite Nomi to join them in ordering Thai but she is still all in her feelings. Jaz calls her out for her white fragility which while true, only compels Nomi to maintain her defensiveness.

“If I was with someone who I thought was homophobic or anti-Semitic, I wouldn’t be sitting here trying to make them feel better,” Nomi cries. “In fact, I wouldn’t be friends with them at all. So if you guys think that I’m, like, racist or problematic or whatever, then why would you still want to be friends with me?”

But once Nomi is able to see things from a different perspective — through a conversation with her equally defensive mother — she recognizes her misstep. She apologizes to her friends and acknowledges that she has her own blind spots. Zoey and Jaz her for hearing them and they hug it out. Is it too tidy of an ending after all that drama? Maybe, but it felt authentic and, more importantly, it perhaps compelled the audience — that loves Nomi and seen themselves represented in her — to recognize their own blind spots. 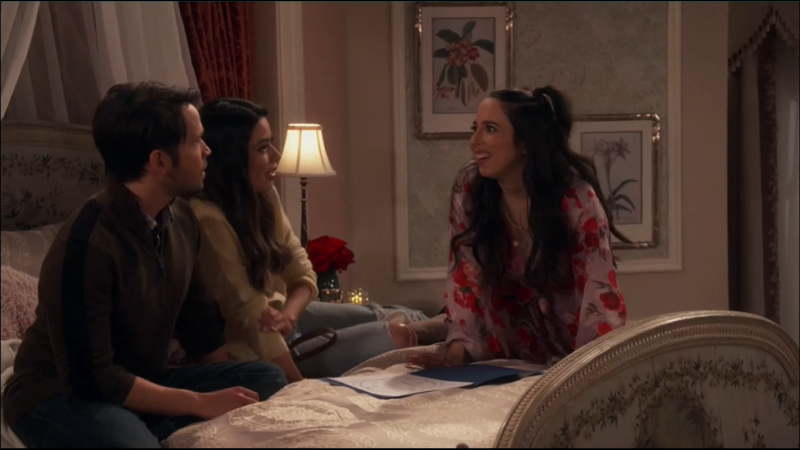 When Carly gets back home and tells Harper what happens, she makes it sound like this happens with Brooke a lot; she also says she heard Brooke is good at threesomes and that maybe Carly and Freddie should have said yes.

And while that plot point is definitely more mature than anything we would have seen ten years ago, it was delivered with the same amount of cheek and hilarity. It really is the same exact show just aged up 10 years like its audience is, and I continue to appreciate that about it.