The following contains spoilers for Harley Quinn’s plot in 2021’s The Suicide Squad.

I am not here to present a treatise or some long manifesto. I am but one woman, having watched James Gunn’s The Suicide Squad last weekend, ready to state the obvious: The time is now for Harley Quinn to get her big screen girlfriend.

Am I the first person to say this? Absolutely not. “Harlivy” (that’s Harley Quinn and Poison Ivy) have been a fan favorite of the Batman universe comics for a very long time, and leapt from fanon to canon in 2013’s Harley Quinn series by Amanda Conner and Jimmy Palmiotti. (This is also a supreme time to mention, relevant to our interests, that the most recent run of Harley Quinn is being done by Tee Franklin, who will be the first Black woman — she’s also queer and disabled — to write Harley and Ivy, of which I am buying every copy). Harley and Ivy also have a surprisingly poignant — ugh, given all the slapstick violence and gore — friends-to-girlfriends arc in the second season of the Harley Quinn animated series on HBO Max. 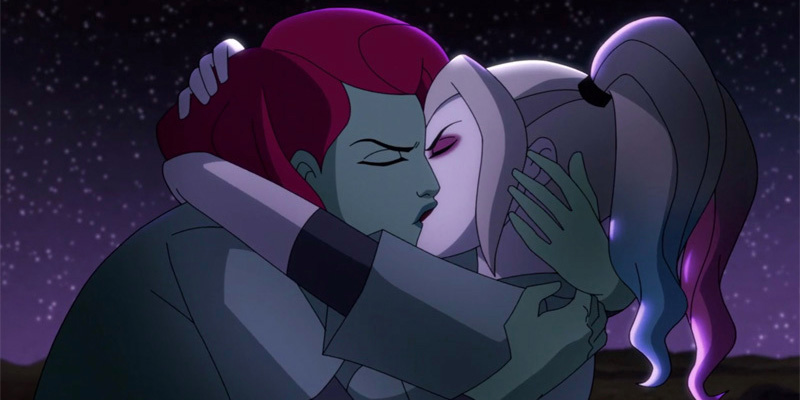 Margot Robbie HERSELF has been campaigning for an Poison Ivy romance, saying in May that “Trust me, I chew their ear off about it all the time. They must be sick of hearing it, but I’m like ‘Poison Ivy, Poison Ivy. Come on, let’s do it.” She followed up in July reiterating the point, “Poison Ivy, that is a relationship I’d love to see play out on screen.”

No, I am not unique — in fact, arguably, at this point, the topic has become pretty mundane. And yet! STILL! A queer romance has alluded Harley on the movie screen. But on Monday night I was scrolling through comic movie nerd twitter, as one does, and I stumbled onto a Margot Robbie fan account that summed it up so succinctly that I haven’t been able to get it out of my head since. Not only is fan uproar begging for Big Screen Harlivy, but for the first time, the actual plot in front of us is screaming for it too. It’s now or never for Harley Quinn to make the leap, and we’re quickly reaching a crescendo in her movie arc where to do anything else would be cowardly. 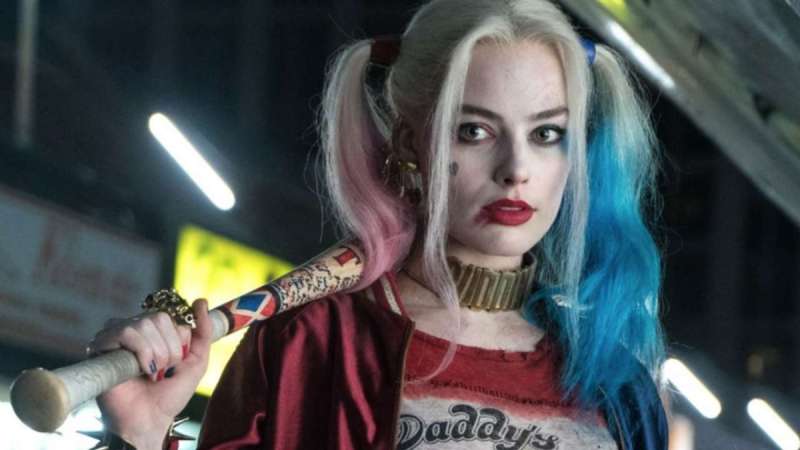 In David Ayer’s Suicide Squad (2016), Harley Quinn is dating The Joker, which is standard for her origin story across all iterations (Harley Quinn is distinct in that she began as a non-comics property, as The Joker’s girlfriend in the 1990s Batman animated series, before working her way backwards into the comics and becoming a fan beloved character across comic books, video games, television, and starting in 2016’s Suicide Squad, film). There’s enough to write about Jared Leto’s controversial Joker to fill a treasure trove of study, but what is most interesting for Harley comes later, in Suicide Squad’s Harley-centric spin-off, Cathy Yan’s Birds of Prey (2020 — long title Birds of Prey: And the Fantabulous Emancipation of One Harley Quinn, which really only serves to prove my point).

In Birds of Prey, Harley has broken up with The Joker after he got her out of prison, already an unexpected turn, but it takes matters further — the film takes seriously that The Joker, by literally any understanding of his character, was an abusive boyfriend. For all of it’s sparkles and glorious glorious chaos, at its heart the movie is stuck on one central question, asked by a drunk Harley Quinn during a post-breakup bender to a friend she’s just met, “What is a harlequin without a master?”

For the first time in her story on screen, it’s not a joke — taking the fantastical and never yielding Harley Quinn earnestly not only as a survivor of abuse, but a larger-than-life case study of what it means to find yourself again. How you can start making those first shaky steps of moving forward, of clawing your way to a future you haven’t yet seen — if only because you have stubborn faith that it must be better than what you’ve left behind. Plus, confetti guns for bullets and a love-letter to an egg sandwich. You know.

(For the purpose of my not-a-manifesto, it’s also worth noting that Birds of Prey is the first introduction of Harley Quinn as bisexual on the big screen, in an animated montage before the opening credits. Moving on.)

Now we follow Harley Quinn to yet her third movie. For the purpose of official review, THE Suicide Squad (and yes, the “the” is how we’re expected to distinguish between this iteration and the 2016 version) is quite simply better. There’s no reason to belabor the point, it takes all of the brightly colored, stylized humor, comic book violence and adult sensibilities of the original terrible Suicide Squad — which I’d argue Cathy Yan was actually the first to perfect in Birds of Prey, criminally under-appreciated outside of gay circles — and then leaves it in the hands of Guardians of The Galaxy’s James Gunn, who is a master of “hahahaaa funny creatures and a Crayola crayon box of colors but also who’s cutting onions in here because I can’t believe I’m now crying” storytelling. I’d say its heart is on its sleeve, but really it is just below its razor blade. 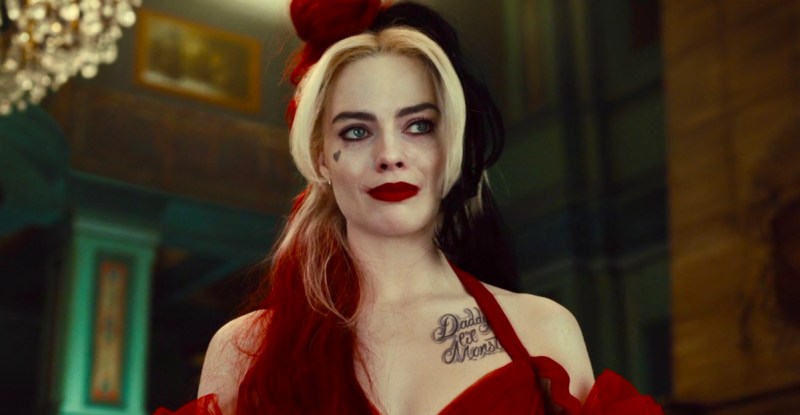 And THIS is when Harley shines. After being swept off her feet by an evil dictator (don’t ask) Harley marvels at being chosen like a princess. She swoons at the gowns and jewels, birds chirp around her like Cinderella. I’d already rolled my eyes, prepared to write this version of Harley off as a return to her 2016 form — completely divorced from her resplendent arc of freedom in Birds of Prey — when all of it sudden it happens. Dictator boyfriend waxes poetic about medically torturing children. He turns around and Harley shoots him square in the chest.

As he bleeds out on the floor, Harley explains. She promised herself that after The Joker, if she ever saw another red flag in a boyfriend she’d shoot first. Because “When your taste in men is as bad as mine, they don’t just go away quietly… And all the cruelty, tears you apart after a while.”

Sure in about 15 minutes Harley is going to have to shoot her way out of capture and her gun will once again bang out flower blossoms and cartoon blue jays instead of bullets, because that’s the kind of movie we’re in. But for right now, in this moment, Margot Robbie looks up at the ceiling and she cries.

It’s never been more clear — Harley Quinn has had bad boyfriends, infamously violent boyfriends who psychologically abused her and just when she thought she would break, instead she grew. She grew into a version of herself that she never knew existed. She’s had to learn that she is worthy of loving on her own terms. And she’ll never go back to being small again.

The back of her jacket used to say “Property of Joker,” but now it says “Property of No One.” She’s scraped and she’s scrambled and sure, it’s been bloody. But it has been hers. It’s harrowing and it’s beautiful, all at once.

Harley said it herself: No more bad taste in men.