If you’ve been watching Mike White’s HBO mini-series, White Lotus, it’s likely you’ve been constantly asking yourself: What is the deal with White Lotus? Is it trying to say something about race? Class? Imperialism? Is it a comedy? Is it a murder mystery? Is it just another show where white people try to out-horrible each other, but set against an idyllic backdrop this time? The answer to maybe all of those things is “yes.” But of particular interest to Autostraddle readers — we know because you keep tweeting us about it — are vaguely lesbian mean teens Olivia and Paula. What in the world is going on with those two? 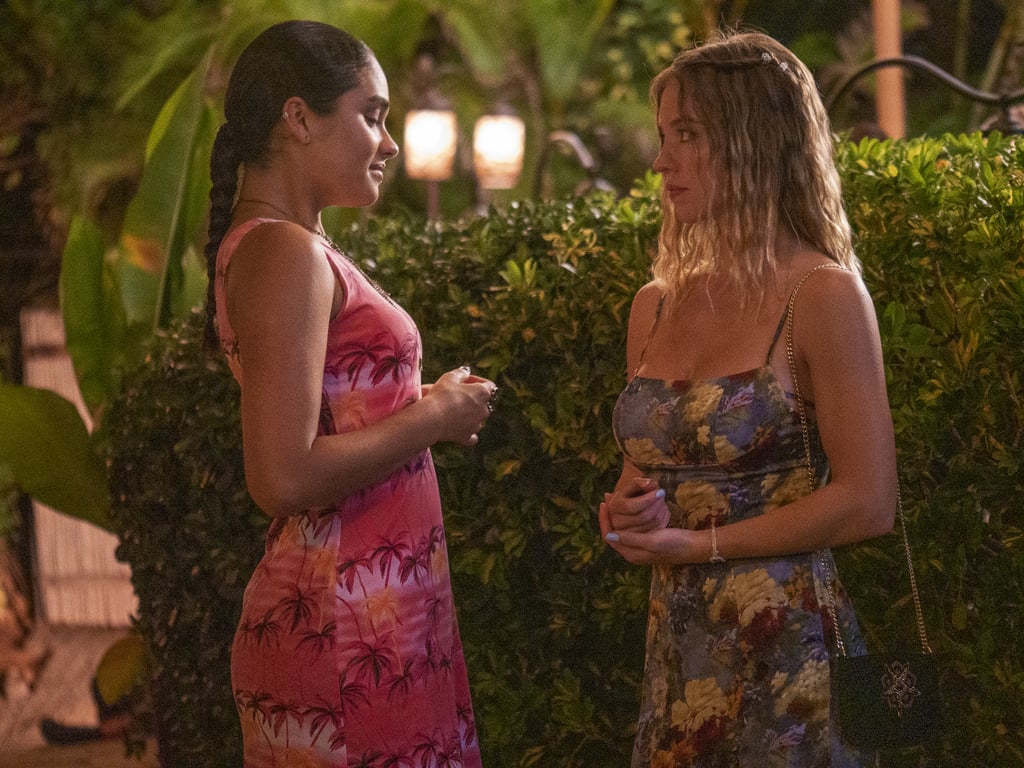 What started out as a story about a young adult friendship between two liberal arts majors who were well-read, raised by social media, and kinda flirty with each other while being kinda hate-y toward everyone else, has evolved into a dark and complicated twisty kind of thing where, like, maybe they are in love with each other? Or maybe Olivia’s in love with Paula and Paula knows it but Paula just wanted a nice vacation? Or maybe they had some kind of thing and Paula having to spend all this time cooped up with Olivia’s truly terrible parents, while being exposed to the colonialism in Hawaii first hand, has opened up something for her? Or maybe Olivia is your average psycho lesbian? Or maybe every teen is vaguely lesbian these days? Or? Or? We don’t know! They’re doing blowbacks, they’re trying to hide their flings and stalking and major crimes from each other, they’re zipping through a truly bonkers summer reading list, they’re terrible, but also kind of the only self-aware guests on the whole show? Anyway, before the finale this Sunday, we’re asking everyone on our team who watches this show: What is UP with these two? And do you think they are, in any way, involved with that — dun! dun! dun! — dead body?

Okay first of all, I love Mike White. I love him as a writer/producer/director, I love him as an actor, and most importantly: I love him as an Amazing Race contestant with his cute Gay Dad!!!!!!! We stan a Gay Dad/Gay Son Combo!!!!! So normally I would go off on a MAKE THEM GAY YOU COWARDS rant but I am instead giving this program the benefit of the doubt. Also, I enjoy it as a show, so.

For the first few episodes, these two ladies radiated mean “best friends who fuck” vibes. They clearly considered themselves more evolved than their co-travelers in that way that you do when you’re 19 and just read Foucault in your Sophomore seminar. They had a deep intellectual, social and sexual kinship they maintained slightly below the surface of the story and public consciousness because they did not deem the world worthy of their public acknowledgement.

Paula’s eventual liaison with Kai didn’t initially throw me off that track, ‘cause I’d assumed they were bisexual to begin with and certainly not monogamous. But the relationship seemed to be driving a deliberate wedge between the two girls, and possibly we were unearthing the reality that Olivia’s feelings for Paula, however large or small, may be one-sided. Also they are sharing a bed and they haven’t boned yet. I find this disappointing, I think there were many opportunities for covert sex that would’ve added to the atmosphere, story and entertainment value of this program. 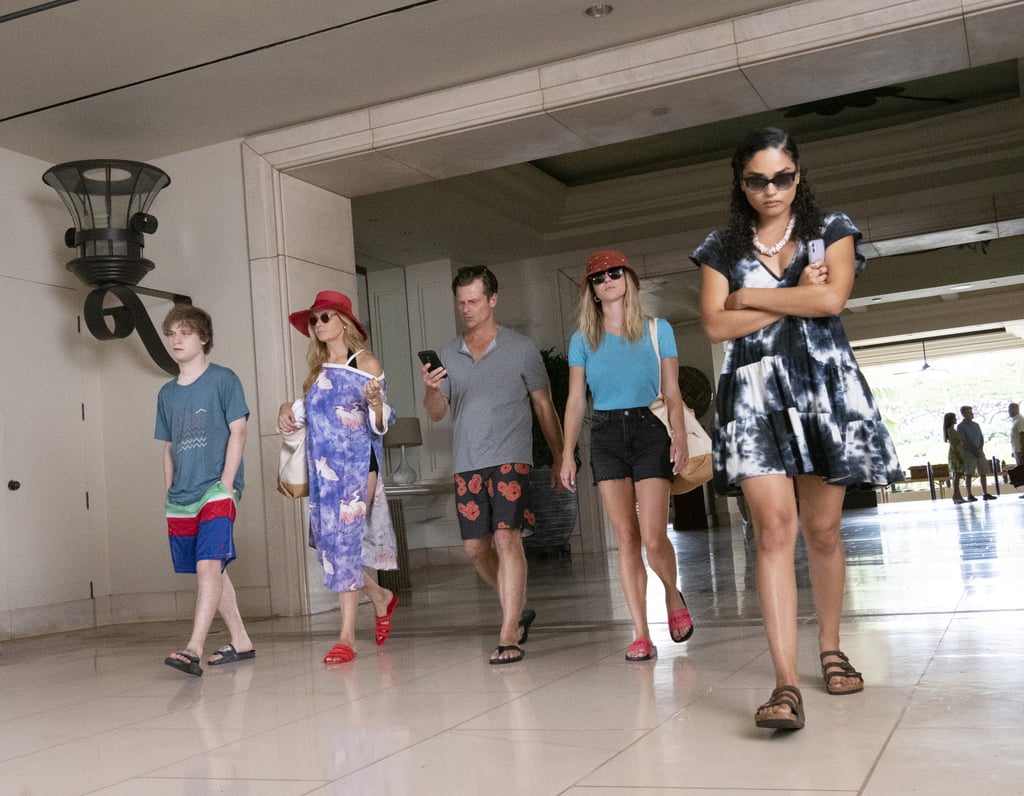 But things took an eventual turn to where Olivia is consistently choosing to lay back when Paula is subjected to racial microaggressions and aggressions from her family. She’ll say one or two moderate things before saying nothing at all. And now that she’s jealous of the relationship with Kai, she’s stopped intervening entirely even though the conversations are growing increasingly offensive and absurd, like it’s difficult for me to watch without wanting to volunteer myself for a lively debate with this terrible family.

Olivia’s solidarity with Paula specifically and any claims to care about racial justice in general have been entirely squashed. If her willingness to intervene, find a way to excuse Paula from the whole shebang or really do anything besides just sit there depends entirely on how strong her relationship with Paula is in that moment, then it was never genuine to begin with. AND THEN Paula wanting Kai to steal the bracelet was frustrating because like, yes in theory it’s a great idea but in practice it’s an objectively terrible idea for him to take that kind of risk and Paula is very naive about 1) the cost of legal representation, 2) the likelihood of him and his family winning any kind of court case. And as we can see it did not go well!

They have one episode left to act gay, so.

Actually my girlfriend, who has actually watched the show!

I’m obsessed with this show and have a special place in my heart for Quinn, who’s the quintessential iPad kid. In the beginning I thought Olivia had a crush on Paula, but it seemed too simple – especially after the scene where Paula gets out of the pool. The way Olivia reacted had a jealous “I wish I looked like her” vibe.

Olivia comes off as an Instagram activist who doesn’t actually have any real values; she just cares about being in control. She’s jealous and possessive of Paula because she needs a non-white friend since it aligns with her “values” and she’s able to call people out in defense of her friend. 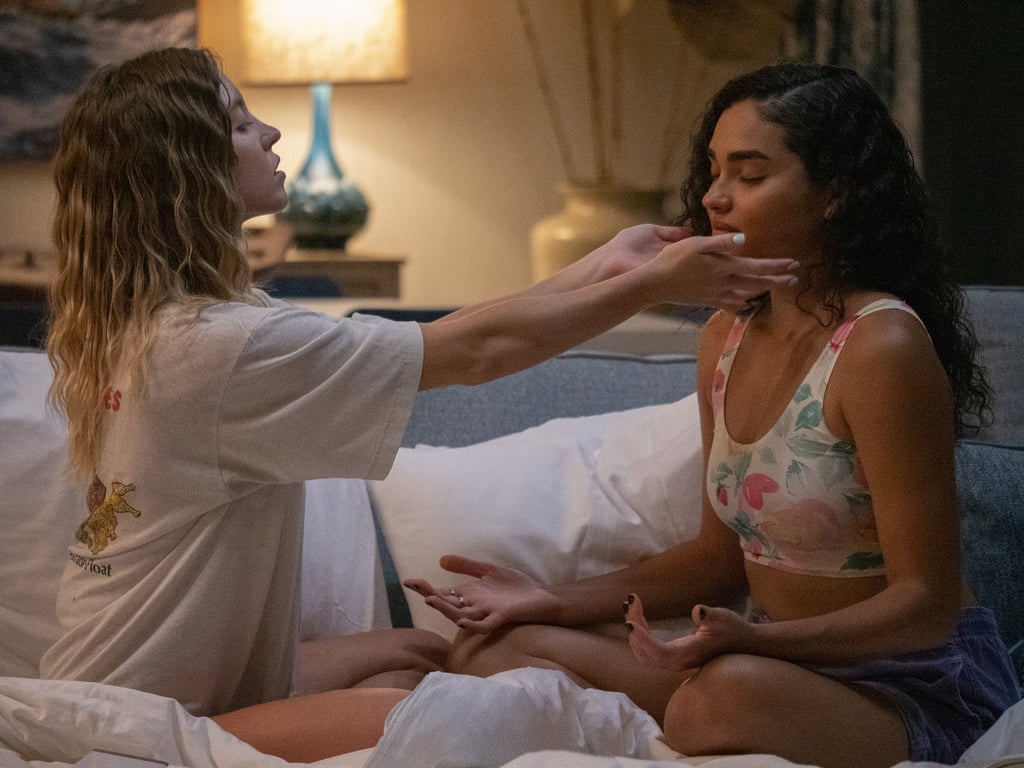 Olivia loses control of Paula when she starts running off in the middle of the night, and Olivia can’t handle not being the center of attention. I feel like Olivia goes after Paula’s love interests because she’s jealous of Paula and since she grew up pretty, white, and wealthy, her sense of entitlement and dominance is high. Like, how dare Paula run off with the hired help when she’s only on the vacation because Olivia’s family is footing the bill? It’s like Paula is Olivia’s paid entertainment and should be with her 24/7.

I haven’t seen this television show and I have no idea who we’re talking about! Vaguely lesbian mean teens? Like as a concept? Personally, I’m all for it. I think they should make out.

I absolutely think Olivia is into Paula (and maybe at one point Paula was even into Olivia) but the great thing about having more and more queer representation on TV is it’s a lot easier to root against lesbianism! And I sure am in this situation!

During the first few episodes Paula was a sidekick to Olivia’s evil, and the thought of them making out after verbally destroying Alexandra Daddario delighted me. But as Paula’s relationship with Kai has grown and we’ve gotten to spend more time with her as an individual, it’s become clear that they’re less a menacing duo and more that Paula is one of Olivia’s victims. It’s been fascinating watching Paula grapple with her place in Olivia’s family and ultimately decide proximity to wealth and privilege isn’t worth it. I also appreciate that Olivia trying to steal Paula’s boyfriends is what ultimately pushes her over the edge because oftentimes we can’t really internalize the political until it’s personal in a way that’s less serious on a macro level but more intimate on a micro level. 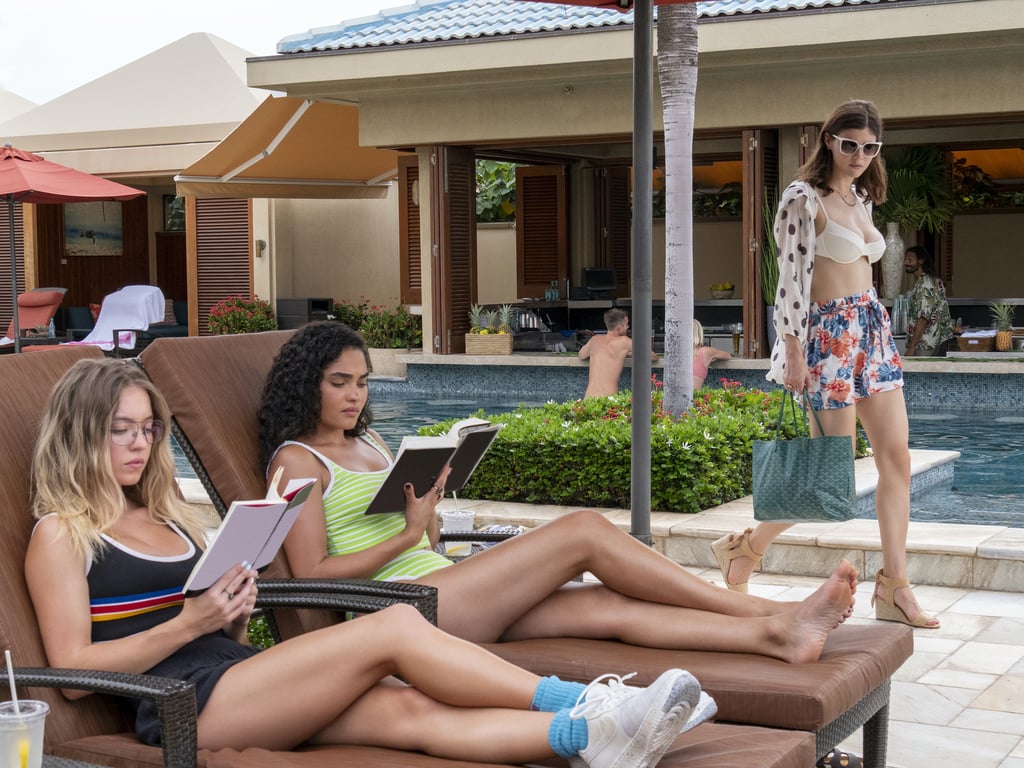 I went to NYU so Olivia feels so, so real to me. And this show has confirmed that I do not regret not making richer friends in that world of rich people even if the idea of being a plus one on a vacation seemed theoretically appealing. In reality… not worth it! And may Olivia be a reminder to us all that queer people can suck too especially when their mom is Sheryl Sandberg.

I think for sure Olivia is into Paula. I forget what episode it is but when she figures out Paula has a boo, the look of loss and anger on her face speaks volumes. It could also be, as Paula said, this idea that Olivia doesn’t want Paula to have anything that isn’t their relationship.

I think that reading really plays into Olivia’s like faux radical activist thing. In the last episode where I believe her father is going on a rant and says “what should we do give away all our money?” And she gets this look like “of course not I love 2 b rich” really shows how she’s all talk and the realities of the actual POC in her orbit don’t mean that much to her. 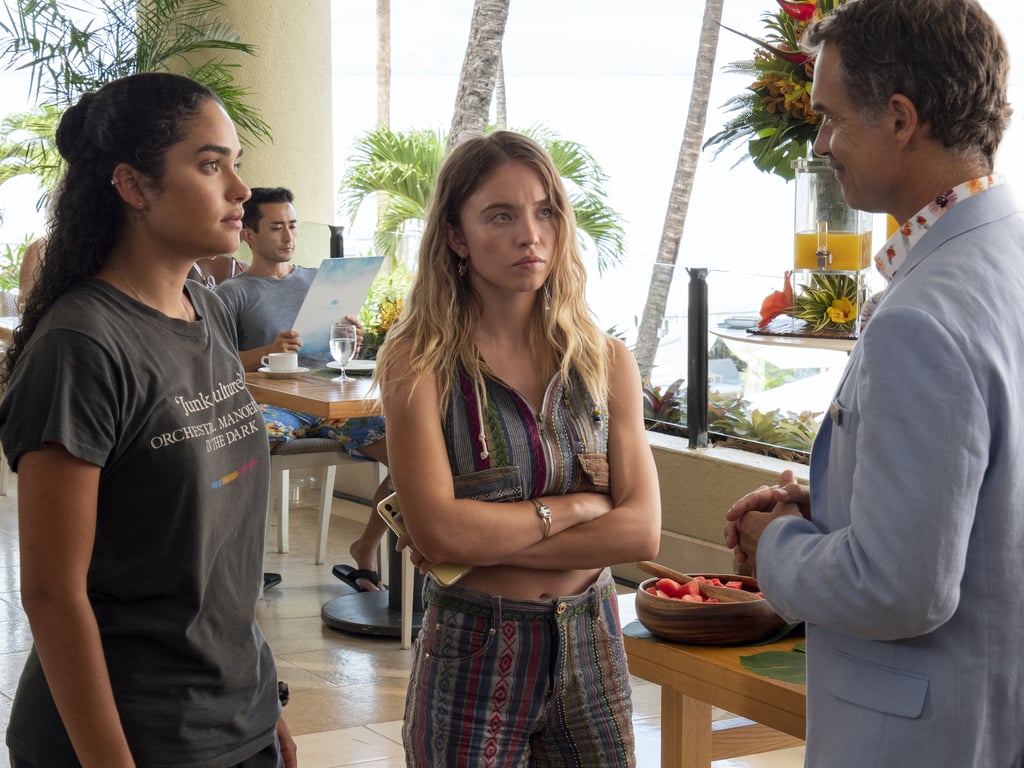 Do I want them to kiss? Kinda. I’m a dyke and I love to watch dykes kiss but I feel like Armond is filling the gay whole in the show for me. I think what’s more interesting for Olivia and Paula is the conversation of power. Like even if they were together I doubt Olivia would be able to reckon with the inherent power imbalance in the relationship. She’s well read and educated but none of that stuff makes up for her being white and rich, she’s not at the point in her life where she’s ready to betray those things.

I also went to a PWI and dated someone white and rich so I could be projecting but I think I’m right.

Disregard for my resting heart rate aside, I am see-sawing between whether or not they are lesbianing together. At first, the “Do you wanna do some ASMR?” and shotgunning bong rips read as sapphic and intimate, and then, I started wondering why Olivia just took Paula’s weed and didn’t really share, why the ASMR was also one-sided and very much Olivia controlling Paula’s sensory experience. The whole thing reads as creepier and creepier the more the show progresses. 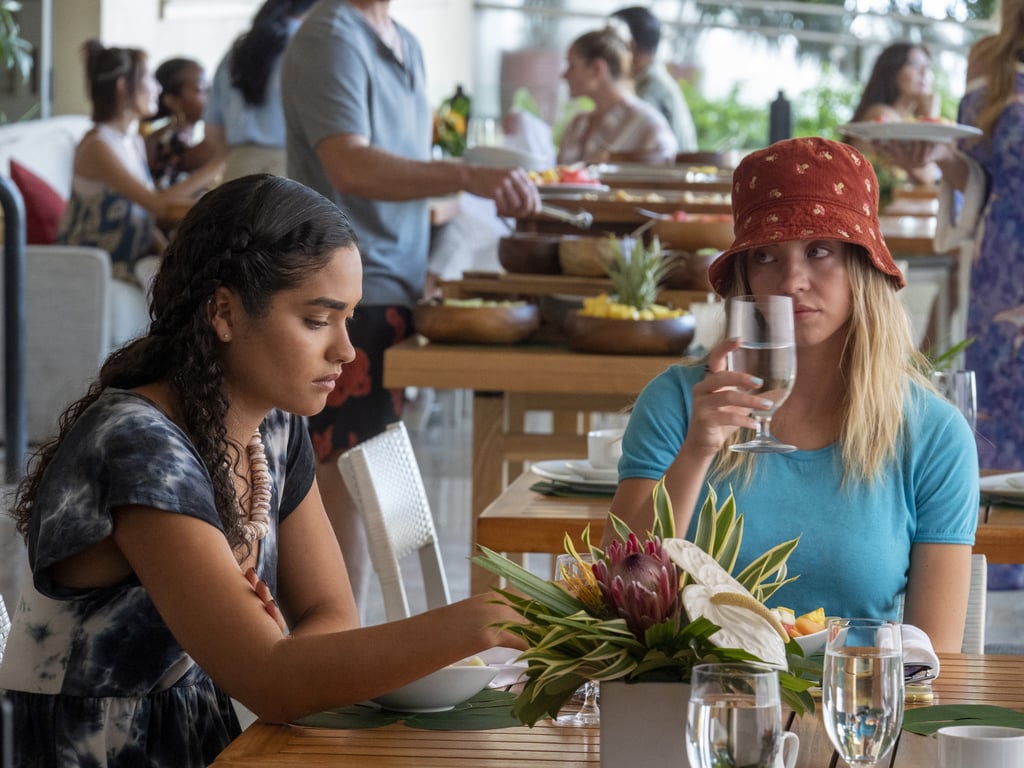 Targeting the love interests of your queer crush is a very young and chaotic bisexual move (apologies to the queer crushes of my youth), so I won’t say even that Olivia’s history of trying to steal boyfriends is necessarily evidence against them being gay. That being said, I do not want them to make out. Olivia is not Paula’s friend. She stops sticking up for her, pursues Kai, and didn’t really care about finding Paula’s Klonopin so much as she wanted to find the Ketamine. Not caring about someone else’s panic attacks is not very Gay of Olivia. Maybe Paula got into this because she kind of had a crush on Olivia, but I can assure you that this crush is g o n e.

Honestly, I will not be surprised if Paula and Olivia never speak again after this trip.

My main issue with White Lotus is that we already know Richard from Carol doesn’t die, which means Olivia and Paula didn’t drown him in his little piss baby plunge pool, which is a real missed opportunity for a queer narrative victory in my opinion. 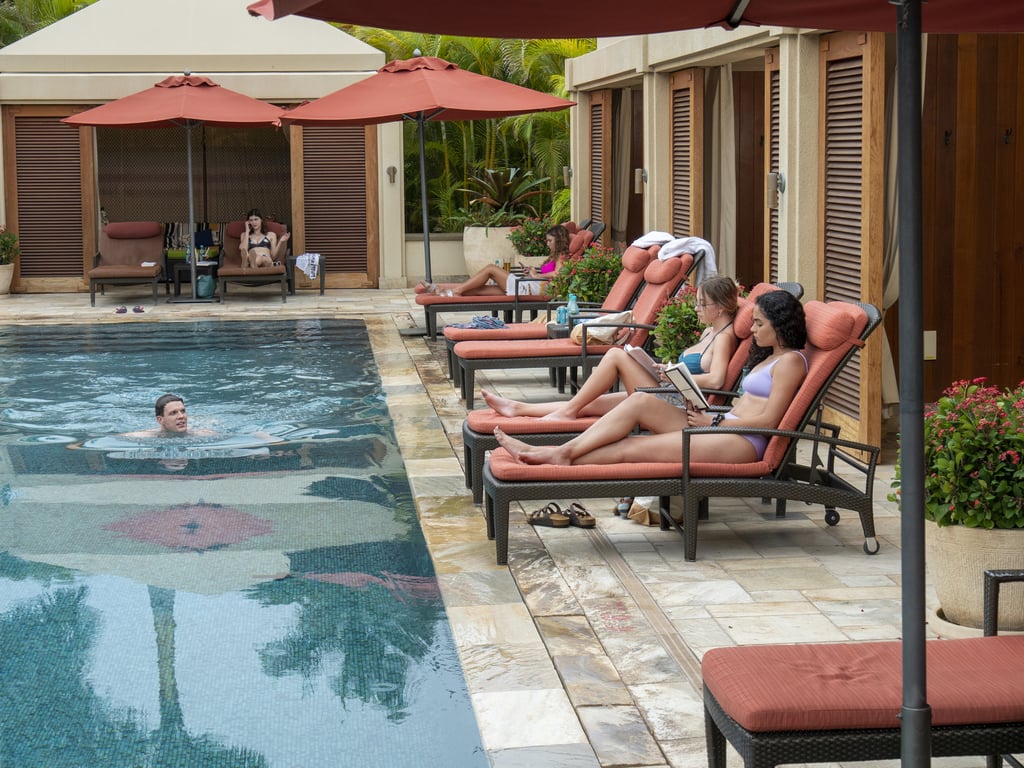 YOU MADE ME BUY BOAT TICKETS!