If you were born between 1979-1989 and live under a rock, you may be shocked to find that the mainstream media loves talking about how our generation is afflicted with social-media-induced-ADD-and-narcissism. If you have not been living under a rock you may be significantly less shocked, because seriously the media — particularly the New York Times — is obsessed with talking about how worthless millennials are as human beings. They usually blame it on technology and laziness, which implies that if we would just stop being such “internet girls” all would be right in the world. 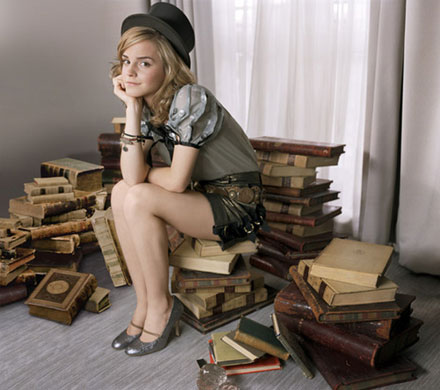 Emma Watson is a millennial and she buys a lot of books
via mnemosyneblog.wordpress.com

Which is why I was particularly delighted to discover that according to the 2012 U.S. Book Consumer Demographics and Buying Behaviors Annual Review, millennials spent more money on books in 2011 than any other humans. We bought 30% of the books sold in 2011, which is impressive when you consider that many of us do not have large disposable incomes (because we are so lazy and just want to live it up at home with mom and dad, of course).

Aside from feeling slightly smug, I also felt unsurprised. Are you surprised? I dunno, I feel like most people my age love books and reading, and really enjoy the feeling of owning (or making!) something tangible. I think if anything, the fact that we’re all immersed in technology and digital messages and screens 24/7 makes us really respect and revere physical objects like books (and records and zines and mix tapes). The study pointed out that 43 percent of millennials do buy books through online vendors, and apparently we’re leading the way in the adoption of digital texts. GOOD joked that unless our generation “gets a sudden nostalgia for perusing the stacks,” we’ll see more bookstores shutting down, but I’m not convinced. I do see nostalgia from my peers, even the ones who are not, like me, obsessed with DIY community. I also see opportunities to support independent bookstores that sell digital texts, which is not a bad thing. Besides, I think it’s time for us to acknowledge that online publishing is a valid medium, and that the “death of print” will not automatically lead to the “death of publishing.”

So whew, crisis averted. The mainstream media is going to be super sad to learn that not only are millennials smart and well-read, but that the world of publishing is actually going to be okay, too. How sad for them. While they try to get over it, I’m gonna go buy a book.