It has taken me five years to write this essay.

I didn’t realize how important writing our stories was until I started talking about my story — about being estranged from my family, about marriage, about disappointment. As queer people, we share all of the great and wonderful things that happen in our community. We also need to share the stories of what happens when things don’t pan out, when things are devastating, when things are difficult. There is so much power in sharing our stories. Because as the phrase goes, we are not alone, but sometimes we need to feel those words rather than be told them.

When I came out to my parents, the rejection hit me so badly I could barely get out of bed most mornings in college. I ended up going to an emergency therapist one day because I needed to talk to somebody. When I sat down in the therapist’s office, I sobbed the entire time, and the therapist, who had a tiny rainbow flag hanging in her office, told me softly that things would be okay, that I wasn’t the only person. There were others, she said, who came into her office with the same story. Her eyes were filled with tears. 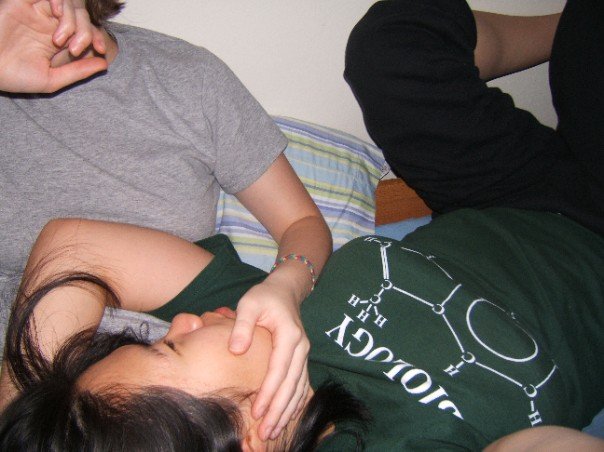 November 2007, right after I came out to my parents.

What happened next I never anticipated: People started coming up to me at A-Camp, telling me that they shared the same story too. Homophobic parents. Families who didn’t understand or try to understand. The fear of coming out. The hurt and devastation of being disowned or estranged. These were people with my story, too.

To anyone who is going through this today: You are brave. Braver than you will ever know. And you can make it through this. It seems unbearably insurmountable at first, I know. But fighting for yourself, for the freedom to love yourself and let others love you, is so incredibly difficult and important.

I made it through this and it was the most difficult thing I will ever do. And you will make it through, too.

It’s taken me five years to use the word.

Get up, brush my teeth, put on jeans. Go to work. Come home. Eat dinner. Estranged.

I am estranged from my family.

It sounds weird coming from my own mouth. I repeated it slowly, over and over again, the first time my partner, Jessie, said it. It was a week or two ago, when I was angry and frustrated about some little thing. Maybe it was about misplacing the DVDs I had to return to the library, or about something that happened at work, or about feeling conflicted about writing enough or too little.

It’s the sort of anger that saturates everything, jumping to and from every heartache and hurt I’ve ever felt in quick succession. It might jump onto how I was frustrated that I didn’t have the energy to make dinner for us tonight, or angry about the time at work a patron made me cry after insulting me to my face. Or resentment at my father for not telling me my grandfather was dying before my grandfather passed away four years ago. I relive it all in microscopic detail: The anger. The lack of control. The flailing feeling in me, even though my arms feel leaden, dead weight. 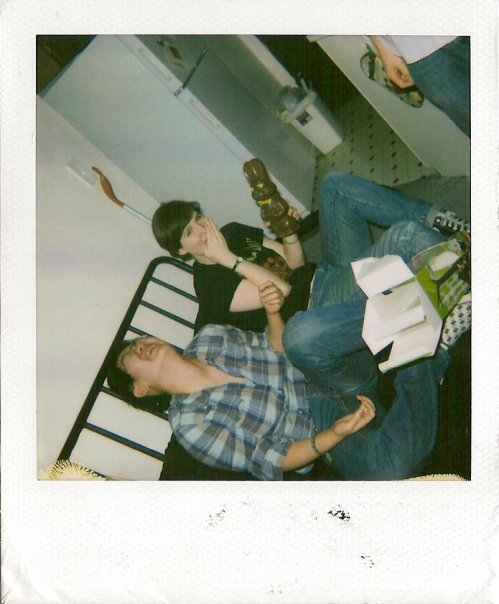 I want to punch everything and stomp on it and set it on fire and stomp on it again. I want to have yelled at the patron who wouldn’t look me in the eye as she insulted me. I want to have known that my grandfather was dying so that I could have visited him one last time in New York instead of hearing the news over the phone, bewildered and overwhelmed. I want to have had the energy to make dinner and take care of everyone and wear an apron, smiling, spatula coated with oil, flipping over some kind of delicious thing to give to my partner. I want to do everything differently.

“You are in a lot of pain right now,” Jessie says, breaking through the haze of could-bes, the things I could have done right, the places I failed. She speaks slowly, as if talking to a small child. “You are dealing with being estranged from your family.”

My shoulders unclench. I feel the hunch of my back loosening. I haven’t looked at Jessie for a few hours, my anger getting on her, too; she has been difficult to look at. Maybe because my face could be reflected in hers: pained, painful, devastated.

I look at her. I hadn’t thought about it that way before. I had never used the word estranged in my head to explain my relationship with my parents. I didn’t use the word after I came out to my mother five years ago and she screamed at me and told me that she wouldn’t help me pay for my college tuition if I was gay. I told her I was straight so I could continue going to school. 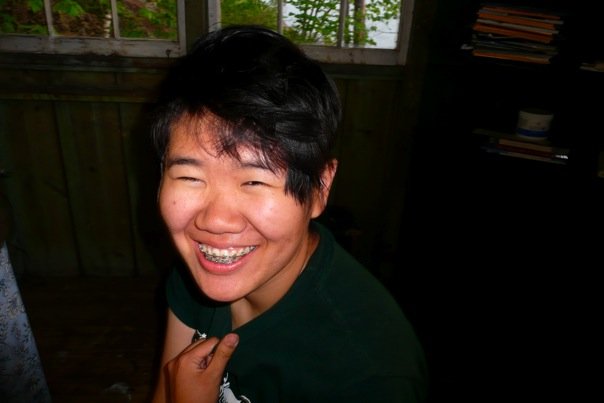 June 2008, right before shaving my head in Maine.

I didn’t use the word after I told my mother and father I was moving to New York with Jessie after being closeted to them through college. They told me they wouldn’t support me and made me spend the last of my savings on college expenses they promised they would help me with. I moved, moneyless and jobless and unsupported, to upstate New York, where Jessie was going to graduate school.

I didn’t use the word six months ago, after I called my mom, my hand clenched tightly to Jessie’s, telling them I was getting married, and the only thing I could hear was silence on the other line, then my mom’s voice: You are making a horrible mistake. I called my father soon after to tell him the good news. He didn’t pick up. I left a message, telling him to call me back. He never did.

I don’t know why I didn’t use the word, that “e” word. I think it’s because I believed somewhere in my heart that everything was actually okay, and that they did love me, and that maybe they would come around, as many optimistic people have told me over the years. “When they see you happy, they’ll accept it,” someone told me once at a tarot-reading party where I ended up crying after someone read my cards, vague as can be, but somehow cutting straight through my heart: a deer, antlers heavy, a message, breaking with something.

When there are tears about something unchangeable, people can only be optimistic. It’s the only thing that is left. “When you tell them you’re getting married, it will get better,” someone told me that day, with tears in her eyes.

I’ve been seeing college acquaintances get married on Facebook. There are always white dresses, green lawns, blue skies. There is champagne, cake, dancing. There are flowers, an endless sea of white folding chairs, elaborate receptions and slow dances and kisses in front of the cake. There are loved ones smiling, teeth bleached out in the flash of the camera. There are brides walking down the aisle on the arm of their smiling fathers. There are candid, loving kisses from mothers.

Sometimes I get angry about weddings. It’s that same kind of anger — explosive, saturating — that gets all over everything. I feel angry that straight couples can get married without fighting as hard as I have. I feel angry that people my age, barely out of college, can spend so much money on a resort wedding because their parents have helped them foot the bill. I feel furious that couples can spend so much money on a honeymoon to Europe when I can’t even begin to think about setting aside a few thousand dollars for my own wedding, let alone a trip after.

My wedding will be in my backyard. There will be a rag-tag assortment of lawn chairs we get friends to bring, and I’ll help arrange them in rows. Jessie will make her own dress, and maybe she will tailor my shirt and vest. We’ll drink beer from a cooler filled with ice that sits on the back step. We will say our vows under a giant fir tree. Friends and family will sleep on the couch of the house we live in now. I will make everyone breakfast in the morning. Scrambled eggs from the farmer’s market. French toast. 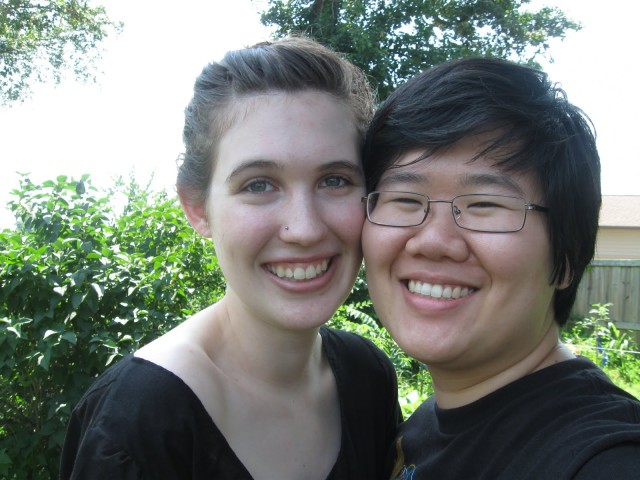 July 2011, three months before Jessie and I got engaged.

Jessie’s parents will be there. They will be smiling, her father with his long white hair in a ponytail, her mother who looks almost exactly like her, her brother in baggy shorts and shirts that skim his torso. Our close friends will be there, from Michigan, Connecticut, New York, Oregon. There will be handkerchiefs embroidered with anchors for party favors. There might be dancing to the song “Rock Lobster.” There will be talking and shouting and laughing and standing out in the grass without shoes, drinking and hugging.

There will be four empty chairs reserved for my family. My mother, my father, and my two brothers.

This is what I imagine from time to time, when I am sitting on the couch or in bed or at work: I’m driving home from the airport in October. My brothers, one 20, the other 16, sit in the back of the car, hugging backpacks decked with flight tags. I will be sitting in the passenger seat because my eyes are tearing up so badly I can’t see the road. I turn my neck to look at them, both jet-lagged and tired, in the back seat. I tell them, over and over: “I can’t believe you came. I am so glad you are here for my wedding.”

One brother is in college, and he has told me that he will be here no matter what. The other lives at home with my parents, and I’m not sure how I will get him here because he is a minor and I don’t know if my parents will let him travel to see me for the wedding. In my mind he flickers to and from view: Sometimes he’s sitting in the back seat, sometimes he isn’t. Sometimes I imagine myself turning around to the back of the car and seeing Timothy, the middle brother, sitting alone. I tell him that I am happy he is here, aware of the empty seat next to him.

Of the four chairs, two will be empty: My mother’s and father’s. I am not sure if three will be.

Last month I called my mom to tell her the final date of our wedding. When there was silence on the line I told her, firmly, “I really want you to be there. It would mean a lot to me. You could say something at the wedding, maybe. You don’t have to. It’s important that you come.”