In March of 2011, a class-action lawsuit was filed against giant retailer Wal-Mart, alleging that it consistently and unrepentantly discriminated against its female employees. Female employees of Wal-Mart alleged that they were paid less than male coworkers in the same or lower positions, refused promotions or refused access to information about how to get a promotion, and saw greater privileges and wages go to male coworkers who were less qualified, had fewer years on the job, and in some cases, that they themselves had trained. In their lawsuit, they called for an injunction that would force Wal-Mart to immediately cease its discriminatory practices, and also for Wal-Mart to grant them the fair wages they had been denied in back pay, the amount of which would likely come to around a billion dollars. 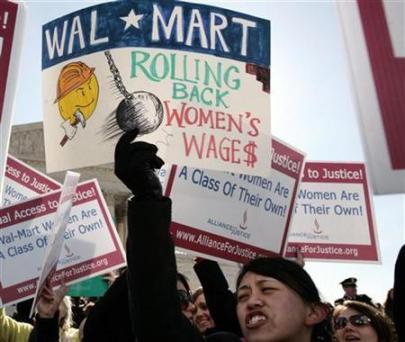 In June, the case went to the Supreme Court, and its momentum ground to a halt. The court ruled in favor of Wal-Mart — not because there wasn’t significant evidence to support the women’s case, there was — but because it ruled that the women of Wal-Mart didn’t constitute the “class” required for a class-action lawsuit. Among other issues relating to the technical legal definitions of a “class,” there’s a question of “commonality,” which means “questions of law or fact” common to the class. Wal-Mart is the largest private employer in the world, and women make up roughly 72% of its hourly employees. What could a group that large possibly have in commonality with one another?

The question, really, was whether the shared identity of being female was enough to mean that everyone within the “class” had been marginalized and harmed by an institution which they depended upon. And while there were other legal concerns (like the fact that the women were asking for both an injunction and a monetary reward, whereas most class action lawsuits only ask for one), the Supreme Court essentially considered this question and answered “no.”

Dayna Tortorici’s article this week in n+1 asks what it means to have the structure designed to uphold equality and justice refuse to recognize inequality, even with plentiful evidence, and places the Supreme Court’s ruling in a context of legal precedent that has either answered or ignored women’s call for equal treatment under the law, especially in the workplace. It seems that while facts of gender inequality and sex discrimination are fairly indisputable, from the wage gap to the countless documented incidents of hiring discrimination against women, there isn’t strong interest from the judicial branch in confirming that woman, and other groups, face institutionalized oppression because of their status as women. As Tortorici puts it:

“…a class of people large enough to constitute a population majority—as women did—could not feasibly be “oppressed,” or oppressed enough to require extra attention at the level of judicial review. The criterion was logical, but it couldn’t accommodate the illogical reality of patriarchy, whose influence on every aspect of  daily life is so big as to be essentially invisible. It seemed as if the law could not comprehend the scope of the inequality it had confronted.”

It seems like women’s sheer numbers may be working against them as far as legal recognition of their marginalization. In that sense, maybe groups like the gay community at least has a literal minority to its name. So during the Prop 8 trial, when experts testified that gays experienced social stigma and harmful quantifiable effects of discrimination, the ruling was that Prop 8 constituted discrimination and anti-gay animus. But for subsequent rulings in higher courts, even when Prop 8 has been struck down, it’s been in ways that don’t make assertions about marriage inequality or what it means, and instead operate upon smaller, more technical aspects of the law. It would seem that higher courts aren’t as comfortable as we might like with recognizing and ruling upon the lived realities that oppression and inequality create. As the much-discussed “war on women” has demonstrated, the legislature isn’t necessarily an institution upon which women or any other marginalized group can rely to give them the protections they need, and while the fact that DOMA was declared unconstitutional and Edie Windsor recently won her case against the federal government are heartening, it seems as if it may not be wise to rely upon the courts, either.