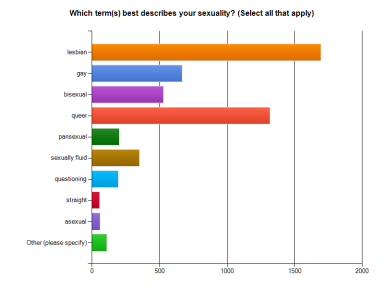 Last week’s Autostraddle Audience Survey was a smashing success, garnering a record response rate and consequentially producing heaps of data for Meredydd to geek out over! While she’s doing math or whatever, I’m looking into more important matters, like “how many of y’all identify as queer?” (48.5%, FYI).

Question #40 asked “which term(s) best describe your sexuality? (select all that apply)” and offered a list of options (lesbian, gay, bisexual, queer, pansexual, sexually fluid, questioning, straight, asexual) and also invited respondents to select “other” and then “please specify.” It turns out there are so many more things in the alphabet.

Below are just some of the descriptions you gave of your own sexual orientation in the 2012 Autostraddle Reader Survey.

How You Described Your Sexuality On The AS 2012 Reader Survey:

1. my sexual preference is often, babe

2. I have no idea what to label the damn thing

4. maybe jesus will tell us if he ever shows up

7. fuck labels in the ear with a banana

8. I used to like men and women, but men kind of suck, so I’m sticking to chicks for the time being.

10. In therapy to determine best label.

13. funsexual – i only date fun people

16. I can like dudes sometimes, until he pulls his pants down

21. everything all the time

24. one night stands with a side of straight up trust issues

26. lesbian with a fetish for geeks of all gender (does that make me bi? I don’t know))

27. Life is easier in the bathtub