This post was written by Jordan Alam & sára abdullah

Jordan: When my father would use the term “slowing down,” he referred to one of our cats dying. “She’s slowing down” meant “she’s stopped eating, her breathing is weak, she’s on her way out.” For as long as I can remember, I’ve associated slowing down with loss and giving up. Living has meant going to the opposite extreme — always moving, never tiring. I would work six days a week and do all my errands on the seventh. I had convinced myself that I wouldn’t live past 25 and thus had to fit everything in before then.

Living in that high intensity activation state made me feel like my value was defined by my purpose in other peoples’ lives. I had an internal sense that I had been placed on this earth to serve others. But extrinsic validation doesn’t endure. When the attention waned, to soothe myself I would just seek out the next available job, organizing gig, or community project. 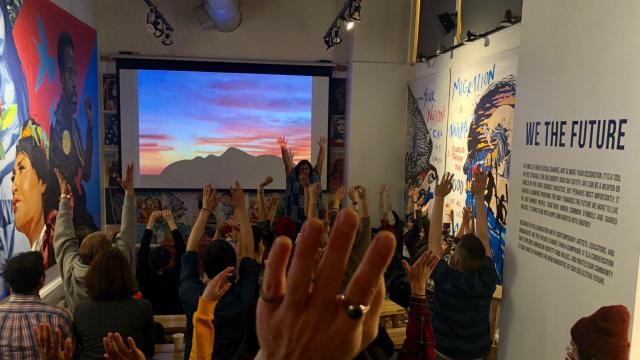 Jordan performing for a group.

I had few models for how to live a long, rich queer Muslim life. I had not yet connected with the LGBTQ Muslim Retreat, not yet left NYC for a year of travel to Bangladesh where my birth family lives. I had not yet identified work as my key avoidance tactic — that was all to come. At that time, I struggled with the question of reconciliation: could I make a life for myself in this body, holding all of these identities at once? That was where my imagination ended.

Why talk about old ways when this is an issue on queer futures? Because I deeply believe that no future is possible without healing the trauma of the past. By turning inward toward our bodies, we can interrupt the patterns passed down to us and begin to build a foundation upon which others may stand.

sára: Like many other baby queerdos, I was adept at fiction. I filled hidden journals with dreams of escaping to a place where I could tend to the earth, write everyday, and build a family of my own — in that artful, nurturing, magical life, I could be fully myself. That vision gave me the strength to survive childhood sexual abuse and a toxic home. With few representations of lesbians, let alone people who looked like me, I had language for my desires but still felt alien in place and body as a little brown, Muslim tomboy hijabi in Texas.

In my writing, I’m 12 and my family has moved us across the ocean to another continent. Then I’m 16, and then 21, each year of life feeling increasingly unbearable. Despite persistent suicidality, the thread of possibility glimmered with greater detail each year. Right before my 22nd birthday, I made it out, leaving behind my family of origin and ancestral lands.

Jordan: Then one morning, I passed the mile marker — I was no longer 25. Six months before, I had returned from a year of travel that had forced me to redefine my relationship to myself. I crash landed back in my hometown of Seattle, no longer in the full forest fire burnout that made me leave NYC, but still new in my regrowth. I was left wondering “now what?” I started talking to other QTPOC friends about my assumed expiration date and found that many of us had created one for ourselves — some younger and some older, but none imagined reaching their 30s. I was saddened but not surprised to hear that so many of my friends shared my sentiment. Outside, being ourselves puts us under threat of homophobic/transphobic violence. Inside, trauma and shame warped our ability to see ourselves as lovable, much less imagine a future for ourselves.

My friend Satchél Silvette had set their year at 28. At first, they felt grief and anger when they reached it because they were supposed to be done: “Everyone was supposed to have gotten what they needed out of me, [and] I would get my relief.” What were they supposed to do with more years on this earth? Now, in their “bonus time,” they’ve described feeling like a newborn again — going through all the same developmental stages and re-learning how to be present.

sára: The next eleven years, I swung between the joy of self-emancipation and the struggle of building a life with no safety net. Self-reliance and grit had kept me alive, but my material reality demanded that I continue to grind myself down. I hoped for a safe, stable, love-filled future where I didn’t have to worry about material resources or work. I imagined having several books published, my own farm and home, and beginning to build a family with my partner at the time, but instead became fixated on the idea that I wouldn’t live beyond 27. I had been pushed to be an overachiever as a child — anything short of perfect was a failure. I felt as if I had missed so many pivotal milestones being a non-traditional aged undergrad and survivor; I mercilessly demanded perfection from myself to make up for lost time.

In New York, I clung to a cycle of living by my calendar, desperate to secure mine and my community’s well-being by filling every possible hour with work and organizing before collapsing into bed. Sleep became elusive as the quiet and stillness gave way to every anxious thought that had been suppressed during my cortisol-fueled day. When I graduated at 27 — fresh into my Saturn return, heartbroken, cash poor, and drained — this pattern followed me into work. I found myself in spaces that exploited productivity through extraction because it was “for the cause,” no matter the physical and socio-emotional toll. It felt as if my life would forever be defined by struggle and tragedy. Then at 29, when I ended up in the emergency room after a suicide attempt, I could no longer sacrifice myself. I needed a new pattern if I wanted to live.

Jordan: I still struggle to change my relationship to “slowing down.” I work in a helping profession, and sometimes the urgency of other peoples’ needs pull me back into that old way of being. You can’t think yourself out of trauma. Prominent cognitive therapies would have you believe otherwise. Instagram would have you believe otherwise. But healing from trauma is done when in right relationship to others, those who can help you to bring those lessons into yourself. As a therapist now, the best ways I’ve found incorporate both meaning-making — talking, processing, making art — and somatic (body-based) approaches.

When I first encountered the language of trauma, it made me feel defective. So much of the literature tells a story of stress-related health issues, emotion regulation problems, and broken relationships for traumatized individuals. But our bodies are smart. We learn how to get our needs met in situations of profound scarcity and neglect. We learn to keep ourselves safe when others couldn’t provide that for us as children. It took me a long time to encounter these strengths-based therapeutic approaches that honor the survival skills we develop to adapt to ongoing crisis. I remind my clients that we are not failing when we overuse the tools that are familiar to us. We can take a gentler view that, although the adaptations we’ve developed may no longer fit our current emotional tasks, we have infinite chances to practice reaching for other tools. What if healing is just about opening up and building awareness of the wealth of options available to us?

“As a Native person, we’re not supposed to exist — we’re already living in bonus time,” Satchél told me over tea. “For me, an elder can be someone who carries wisdom, who provides mentorship [regardless of physical age].” We queer the definition of elderhood to include those who have lived a rich internal life, undoing harm and providing a model for connection. Our future relies on us relearning the wisdom that colonialism suppressed.

sára: Since my suicide attempt, I began reconnecting with plant medicine, earth-based spirituality, and energy-affirming relationships. I cultivated my connection to somatics, a practice that at its core believes that the body is not broken; when healing, it is simply moving from one state of wholeness to another.

What I refer to as the “way of slowness” has ultimately taught me that speed is finite. I want to be slow enough to seize opportunities; I want to be slow enough to live in enthusiastic consent to my desires and needs. I want to live the cosmic duality, shapeshifting like the Moon between Chronos and Kairos. Restoring harmony in our larger cultural soma and our traumatized bodies requires reconnecting with the Earth, the rhythm of the moon, and returning to ancestral and transcestral reverence.

Now, well into my third decade of life, I have become more at ease developing intimacy with uncertainty. I wake up each day and ask myself: What do I want to experience? How do I want to be nurtured? I leave myself open to the infinite possibilities that present themselves when co-conspiring with the universe. Queer elderhood has already been a part of my identity — many of the younger folks in my chosen family affectionately refer to me as “mama.” In years to come, I want to practice being the adult my younger selves needed at 12, 16, 21, and 27, and for my future selves. My close QTBIPOC community and I have been practicing values centered in interdependence, softness, and mutual aid. We share resources when we’re able, practice platonic intimacy, cook for each other. A few of my family are gathering the resources and vision to acquire farmland that we’ll eventually build on together. I credit and uplift so much of my healing to unlearning internalized white supremacist norms (including perfectionism and ceaseless productivity) because of the gifts that Black women and TGNC folks* in my life have shared. 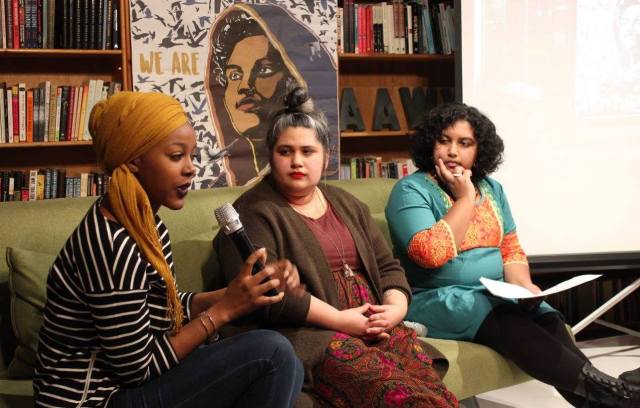 Photo of courtesy of the authors and Asian American Writers Workshop.

Jordan and I have talked at length about healing as a relational practice. Intergenerational relationships have so much to teach us about the possibilities for queer elderhood. Time spent with young people offers lessons in playfulness, resilience, and optimism. The old dykes in my life have illuminated the necessity of living by a disability justice ethic of care**. When more of us activate our innate capacities for self-compassion and collective care, we create the conditions for abundance.

We invite you to sit with these questions: when have you been met with scarcity and what does it feel like to be nourished? What can your body tell you about liberation now and in the future?

We can’t know what will come next, but it matters how we arrive there.

Footnotes:
*For one example, check out The Nap Ministry (@thenapministry) on Instagram. They offer “Rest as Resistance” to capitalist norms of valuing productivity over people.

Another resource for envisioning the future is notable poet-scholar, Alexis Pauline Gumbs.

Join A+!
Related:In Another World

Jordan Alam is a queer Bangladeshi-American writer, performer, and social change educator based out of Seattle. They are currently writing a debut novel which explores intergenerational trauma, Bengali folklore, and borders – both literal and metaphorical. Learn more about their work at their website: www.jordanalam.com.

Jordan has written 1 article for us.