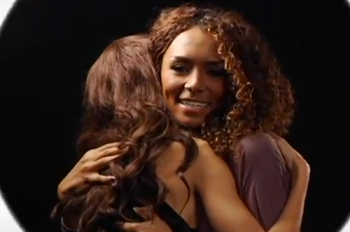 “In the Life” Media aims to expose social injustice by chronicling the true stories and real experiences of LGBTQ people and they’ve done great work for the transgender community, most notably their show Becoming Me, which trailed eight families with transgender and gender nonconforming children and attempted to “elevate the discussion” past “spectacle” level into the “honest and helpful” level.

This week they released an especially awesome “In Conversation With…”, which is – surprise!! — a conversation with activist, writer & People.com Janet Mock and model Isis King, both transgender women who have become increasingly visible over the last five years (Janet is the lovely face behind #girlslikeus, in fact). They talk about trans representation on television, the counterproductive attention from trashy daytime talk shows, and the frustration of interviewers asking the same questions every time, without any regard for manners or privacy or even relevance. These are issues we’ve touched on here in instances like Jenna Talackova’s Barbara Walters interview and Nightline’s “Transgendered Special.”

“After Top Model, I went and did all these interviews. People are still asking the same Trans 101 questions,” Isis recalls. “‘What was your name? How old were you when you felt like you were different? — all of these questions where I’m like, ‘OK, when are we going to move past this?”

“I get very angry when I see depictions of Trans 101 through mainstream media,” Janet agreed.

It’s interesting to think, while watching this video, how rare it is that we ever hear from transgender people talking about their own lives and telling their own stories without any cisgender people in the room.