Binational lesbian married couple Wendy Kessman, from the United States, and Nomfundo Ngidi, from South Africa, have been dealing with multiple complicated setbacks from South Africa’s Department of Home Affairs over spousal visas, in yet another example of same-sex couples being discriminated against by the South African government despite marriage equality being legalised in November 2006. 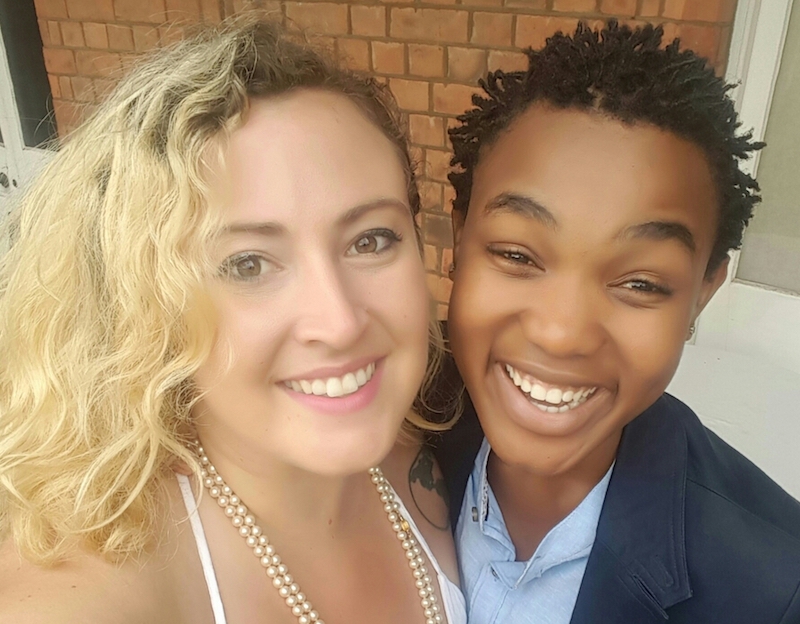 The couple, who have been together since 2014, applied for a spousal visa for Kessman soon after their marriage in early 2017. Their application had been initially rejected as Home Affairs had claimed that Kessman had to return to the United States to apply. This claim contradicted earlier advice from Home Affairs that Kessman could apply for a spousal visa while in South Africa, following a 2016 High Court ruling challenging previous rules ordering foreign spouses to apply for and await decisions on spousal visas outside the country as it was deemed to be inconsistent with the Constitution.

In December 2017, after appealing the initial rejection, Kessman and Ngidi were surprised to find that their application for a ‘study visa’ was rejected, given that they didn’t apply for a study visa.

The couple has received support from South African LGBTI groups and media coverage by MambaOnline, a South African LGBTI lifestyle magazine to escalate their case. However, their case may be unsuccessful, based on a phone call from Home Affairs in the past week saying their application will be rejected again.

“It was a horrible call,” said Kessman, speaking to Autostraddle. “[The representative from Home Affairs said] we don’t understand the law, and what we were trying to do was not allowed because the people who our case’s precedence is based off of had different circumstances.” The couple that filed the lawsuit in the 2016 High Court ruling were heterosexual and had four children.

“It’s become apparent throughout that they don’t see us as a family,” Kessman adds.

South Africa’s Department of Home Affairs has come under fire from LGBTQ activists and community members for discriminating against LGBTQ people in their processes. They have rejected calls to remove provisions allowing marriage officers to refuse to marry same-sex couples, though activists were successful in stopping Home Affairs from forcing married trans people to divorce to obtain a change in their gender marker on documentation.

“There is a lot of anecdotal evidence that suggests that homophobia and transphobia plays a role in the process of trying to regularize a person’s stay,” says Matthew Clayton, Research, Advocacy and Policy Coordinator at The Triangle Project, which provides health, support, and other professional services to South Africa’s LGBTI community, such as clinics, counseling, and legal support for survivors of violence. Speaking to Autostraddle, Clayton noted that there is a lack of data on acceptance and rejection rates of spousal visas based on sexuality, and also points out that the issue seems to affect people regardless of country of origin or resources: “I know of lots of people from the US and UK, people who have the resources to hire lawyers and who have employers helping them who sometimes still are not able to stay in South Africa.”

South Africa has had a tenuous relationship with LGBTI people; despite being one of the first countries to call for protection of LGBTI rights, violence and discrimination is rife, especially towards Black lesbians and trans men.

“Currently the laws in South Africa are very progressive and affirming of LGBTI, but the general population have very different ideas,” says Kim Lithgow, founder of PFLAG South Africa, in an email to Autostraddle that also cited a survey stating that 80% of the South African population consider homosexuality to be “always wrong”. “The staff at Home Affairs are known to ‘lose papers/forms’ or drag their feet where possible. It all depends on the branch that you go to. Home Affairs have acknowledged that only a fraction of branches are willing to assist LGBTI in their affairs. It is part of a larger problem in South Africa.”

“The gap between rights and implementation of rights is significant,” adds Kessman. “We are proud of [the] rights we have as an LGBTI married couple, but if they are not implemented they are worthless. Just because you have rights does not mean you have justice.”

The visa limbo has caused significant stress to Kessman and Ndigi’s life, affecting their ability to work, study, or even undertake basic life skills that many take for granted. “It impacts everything — I can’t work, drive, open a bank account, leave the country, go to school, etc,” says Kessman, a researcher of LGBTI lived experiences in the region; she has been accepted for a PhD program based on her research but needs a visa to commence.

Support from family, friends, and community members (including civil rights attorneys, media, politicians, and advocacy organisations), as well as a writers group founded by Kessman are keeping the couple going. “Doing this kind of work allows for some freedom, and I keep in mind I don’t need a visa to write. But still the income is a consistent issue, we need to sustain ourselves through this emotionally and financially draining process. We need those that are willing to take a calculated risk on us, hire us, fund us. It doesn’t just contribute to documentation — it ensures we sustain this fight.”

Kessman and Ngidi are currently awaiting a written rejection from Home Affairs so they can escalate their case to the High Court, hopefully in the next few months. Due to the contradictory advice and long process times from Home Affairs, Kessman has already overstayed her visitor’s visa, which means she isn’t able to leave the country without being disallowed from returning.

“We have to stay and challenge it, and it is our right to,” she says. “We didn’t have a choice to overstay or not, and now we have no choice as to see it all the way through.”