We’ve reported before on the difficult environment Michigan has created for LGBT people, as one of the most backwards states in the country when it comes to LGBT rights. In Michigan, there are no employment protections based on sexual orientation and gender identity, same-sex marriage and civil unions are illegal and same-sex couples can’t adopt. In short, it’s hard out there for a queer. But we’ve expressed hope that things might change soon, and now, it looks like an opportunity has finally presented itself.

April DeBoer and Janet Rowse are both nurses who are life partners living in Hazel Park, MI, a suburb of Detroit. They’ve adopted three children, ages 3 to 4. Their two sons, Nolan and Jacob, were adopted by Rowse and their daughter, Ryanne, by DeBoer. Unfortunately, as this article in Business Insider puts it, “under Michigan law, they can’t adopt each other’s kids because they aren’t married. If either woman died, the other would not be instantly recognized as the legal parent of the remaining children, even if instructions were spelled out in a will.” As Rowse puts it, another, biological family member could easily contest any claims of custody the dying parent made for the other one in a will.

In order to protect their children should the worst happen, the two moms have sued to allow them to jointly adopt. But it quickly no longer became about just them and their kids. As Business Insider further illuminates:

During a court hearing in August, the judge suddenly changed the case — and raised the stakes — when he said Rowse and DeBoer should consider challenging Michigan’s ban on gay marriage, which was approved by 58 percent of voters nearly a decade ago. So they expanded their lawsuit to claim the prohibition violates the U.S. Constitution’s Equal Protection Clause because it treats same-sex couples differently than heterosexual married couples. 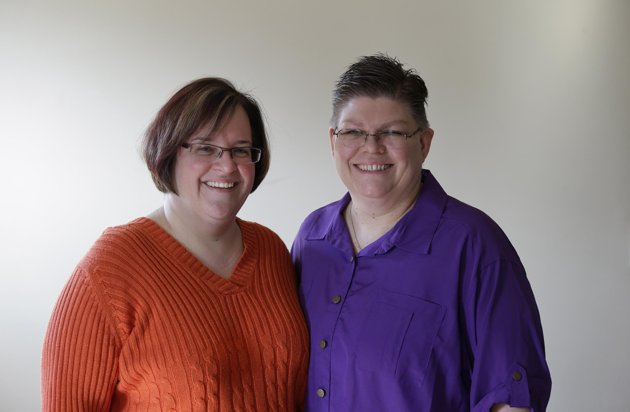 If the state courts find their current laws unconstitutional, that could mean exciting things for same-sex couples across Michigan – likely overturning the state’s same-sex adoption ban, and even likely changing its laws against same-sex marriage. But will it really go that far?

The state is trying to get the lawsuit thrown out of court, on the grounds that there is “no fundamental right to same-sex marriage.” In a groan-inducing attempt at explanation for why the state’s constitutional ban on the practice “bears a reasonable relationship to legitimate state interests” – the idea that DeBoer, Rowse and many other same-sex couples and their supporters around the state want to dispute – they’ve said that “Michigan supports natural procreation and recognizes that children benefit from being raised by parents of each sex who can then serve as role models of the sexes both individually and together in matrimony. Plaintiffs fail to allege facts showing there is no rational basis for these legitimate state interests.”

So that would explain why the state doesn’t allow heterosexual couples to adopt or to conceive children through “non-natural” means like in vitro fertilization. Or why when parents divorce and are then no longer “serv[ing] as role models…together in matrimony,” they lose custody of their children. Except…neither of those things are true. Frankly, it shouldn’t be too difficult for DeBoer and Rowse’s lawyers to poke holes in the state’s argument, if this is indeed the “logic” on which they are going to support it. But that doesn’t mean that the MI Supreme Court will be sympathetic; after all, there’s a reason that the majority of states still ban same-sex marriage: because only a handful of courts have been able to get over their prejudices and see the arguments against marriage equality to be as weak as they are. 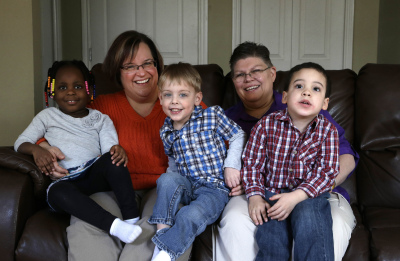 There’s also a question of if the state is “ready” for it, or if we’ll see a backlash against pro-equality judges like what happened in Iowa after the court struck down its gay marriage ban where, in the following election, voters sent some of the pro-equality judges packing over the issue. One of my friends, who is gay and a Michigan native who still lives in the state, told me that, while he’s “very happy that the ban on gay couples adopting each other’s children is being challenged” and that “removing it is one of the biggest steps in achieving equality in Michigan,” he fears what will happen if the court goes so far as to strike down the marriage ban as well:

But I think that by making the leap to gay marriage is too much, too fast. I would love to be able to marry in the state, but I think that the political climate isn’t quite right yet and the reaction of the social conservatives in the north and west of the state will only serve to make the lives of LGBQ people worse were gay marriage to be legalized at this point in time.

Even in Iowa, despite the backlash, the court’s ruling stands, four years later. I’ve written before about how Michigan’s reactionary politics are driving so many people away, so there could be even an economic argument for how the state will be better if it moves its social politics into the 21st century. Yeah, it’s easier for social conservatives if Michigan has less bright young things around, but it’s not so great for the state’s welfare as a whole, which affects them; after all, their allies in the business world can’t be happy about an older, less educated workforce.

Michigan’s political leaders might not be “ready.” Some of its more socially-conservative voters are likely not, either – some of them won’t ever be ready. But it’s clear the time is now that LGBTQ Michiganders get the rights they deserve, including lesbian parents like DeBoer and Rowse and their families. With the Prop 8 trial advancing every day, potentially affecting marriage bans in all 50 states, Michigan may need to be ready, like it or not.