So yesterday the big thing that everyone wanted to see come out of the hearings on Prop 8 finally happened: the federal Justice Department filed a friend-of-the-court brief yesterday in support of marriage equality in California and against Prop 8, as the Supreme Court gets ready to hear the case on the controversial amendment. This brief essentially amounts to an endorsement of the anti-Prop-8 case from President Obama and his administration.

The previous discussions, as the NBC News article discusses, “signaled [the administration] might stay on the sidelines.” When Obama initially announced his support for marriage equality last May, he made it clear that he thought it wasn’t a federal issue. But now that the campaign is over, this brief shows he might be willing to take a stronger stance in favor of equality, believing it should be the law of the entire land.

Or at least, it might seem like a stronger stance… if he wasn’t beaten to the punch by a fairly unlikely group of people. As we previously reported, on Tuesday a group of 75 Republicans, led by openly-gay former RNC chairman Ken Mehlman, filed their own brief in favor of marriage equality in the same case. The list included some big names – not only usual supporters of equality like the Log Cabin Republicans, but many former staffers in the Bush administration and the last three GOP presidential campaigns, noted Republican celebrities (like Clint Eastwood) and former governors, like Jon Huntsman (R-UT) and Christine Todd Whitman (R-NJ). It even included some reversals by previous marriage-equality opponents, like former CA gubernatorial candidate Meg Whitman, and David Frum. All this was a huge deal for marriage-equality supporters on both sides of the political aisle, to have so many people in a party that explicitly opposes equality in its platform standing up for us. And led to even more wondering why Obama hadn’t entered the ring yet. 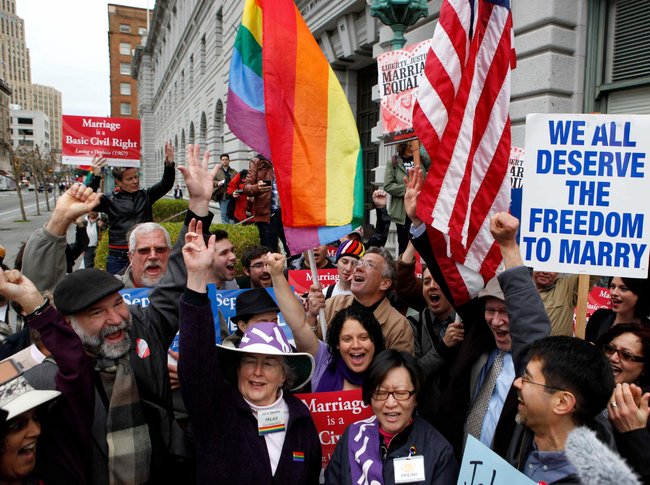 It certainly is significant to see how many Republicans are standing up for the rights of LGBT Americans. But when looking at the specific names, it may not be as historic as it looks at first glance. A lot of these Republicans, such as the many big names from the Bush administration on the list, are people whose political careers are essentially over – they can afford to take chances. Or they’re from socially-liberal states, where a pro-marriage-equality stance will probably help them rather than hurt them (e.g., Meg Whitman). We aren’t seeing people who are current big names in the House or Senate who have a lot to lose if they go against their party on the issue. The Republican Party platform is still opposed to same-sex marriage, as are its most prominent, influential faces right now.

Even as a second-term president, Obama may feel he has a lot to lose in terms of budget negotiations with the House and Senate if he explicitly goes against House Republicans’ attempts to defend marriage inequality in the courts. (Some internal issues like that could be why the administration waited up until the deadline to file the brief.) But Obama has made it clear during the 2012 campaign that he supports marriage equality and has previously refused to defend the federal Defense of Marriage Act, so it can’t be that big of a jump in the likes of Boehner’s eyes.In fact, maybe it was the fact that the previous group of Republicans decided to wade into the fight that actually urged Obama to do it in the first place. Not wanting to seem like Republicans are ahead of him, he felt it was inevitable that his administration would have to file one, too. Obama’s goodwill on gay rights issues has largely been predicated on being just one step ahead of the more liberal Republicans on the issue (and, of course, miles ahead of those deciding the overall GOP platform on this), so it’s essential to stay in the good graces of the HRC and friends to keep this up.

All speculation aside, let’s see what Obama himself says about all this. The president held a press conference today clarifying his decision on the case:

The specific question presented before the Court right now is whether Prop 8 and the California law is unconstitutional and what we’ve done is we’ve put forward a basic principle which applies to all equal protection cases. Whenever a particular group is being discriminated against, the court asks the question, what is the rational [sic] for this. And it better be a good reason. And if you don’t have a good reason, we’re going to strike it down. 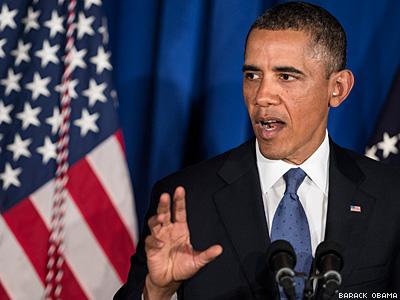 Obama also seems to be going a little further than some of the Republicans involved, making it clear that he hopes that the Supreme Court’s decision on Prop 8 strikes down state gay marriage bans across the land. On the idea that the court “may rule that all bans fail Constitutional muster and allow gay and lesbian couples to marry anywhere in the country,” Obama added, “If I were on the Court, that would probably be the view that I’d put forward.” Whatever Obama said before about marriage equality not being a “federal issue” is clearly repudiated by such a statement. He has, indeed, “evolved” even further on this issue than he had in May.

So one could see this as “too little, too late,” or one could see it as encouraging: no matter what side of the political divide you’re on, support for marriage equality is increasingly a thing that wins, not loses, you votes. And we’re finally getting to see some leadership that doesn’t just take issue with specific state bans, but the idea that states should be allowed to have their own say on a basic equal rights issue at all.