As Kristen mentioned in her update on NOM yesterday, something unprecedented and encouraging has happened in the fight for marriage equality. Yesterday it was revealed that 75 prominent Republicans have signed onto an amicus brief arguing for the legalization of gay marriage in the Supreme Court case dealing with Prop 8 and marriage equality. Since the Republicans of the House of Representatives are the group who have gone so far as to pay for their own lawyer to continue defending DOMA in court even though it’s been declared (partially) unconstitutional by the Department of Justice, this amounts to a pretty major division within the party. And today, the brief gained even more support – two dozen more Republicans have added their names today.

What is an amicus brief, though? Essentially, it’s when someone (or more than one person) who isn’t actually a party in the case offers information to the court on the case, even though the court hasn’t asked for it. The idea is that, especially with cases where the outcome might affect a lot of people, the court can take into account the case’s significance beyond the actual parties in the case. Ultimately, though, it’s the court’s decision whether to admit the information in the brief. Filing an amicus brief is a move that so far even the Obama administration hasn’t made — although 278 companies, some of them among the largest in the country, also filed a brief in the case against DOMA, citing the fact that DOMA “imposes serious administrative and financial costs on their operations.” 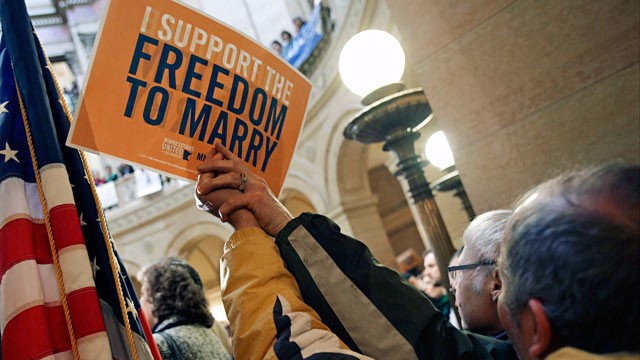 There are a few things that can be inferred from these encouraging and, to many, surprising moves. First might be the observation that the Republican party is definitely not as staunchly anti-gay as it has long been considered; there have already been many signposts of this fact for the past year or so, from the fact that Republicans actually tend to support gay marriage when polled to the number of allies that have spoken out openly within the party on the issue of marriage equality. We’ve known this for a while. But the filing of these briefs may also tell us about something that’s harder to measure — something about how activists have managed to frame the issue of gay marriage. There’s been a campaign for conscious rebranding of the issue for some time now, and it’s possible that these briefs are partial proof of their success. Although some Republican lawmakers and business owners may well have signed on because of moral or personal beliefs, it also seems possible that given the scale of this movement, Republicans and businesses both have begun to understand the ways in which marriage equality is actually in line with their own values. For instance, that there are a lot of ways in which marriage equality lines up very neatly with Republican ideals of small government and personal liberty. Or that marriage discrimination, on top of being unfair, costs families, employers, and America as a whole a lot of money. In addition to being an objectively  good sign for the Supreme Court cases on marriage equality, this may also be a helpful indicator about how the issue of marriage equality is being perceived by those whom we’ve always thought of as opposing it.

Even if minds (and maybe hearts) have been changing on the subject, there’s still the question of how these briefs came into being. The answer is Ken Mehlman. Mehlman was once RNC Chairman and George W. Bush’s campaign manager, came out in 2010. While there was plenty of initial anger and distrust from the gay community given the patently anti-gay initiatives he’d been involved with, Mehlmen has since been on the board of the American Foundation for Equal Rights, the group responsible for organizing the lawsuit against Prop 8, and has worked with Freedom to Marry along with many other marriage equality groups. The New Yorker has a comprehensive explanation of his involvement in Tuesday’s brief, and it’s well worth reading in its entirety.  When he first came out, some doubted Mehlman’s integrity as a gay activist because of his past with the Republican Party. But the work Mehlman did to quietly and persistently court prominent Republicans to put their names on this brief was only possible because of his past with the Republican Party. As the New Yorker puts it:

How was Ken Mehlman able to go to all of these people who signed this brief for gay equality and ask them for help? It was because he had worked with and known many of them for decades, and because now they finally knew him.

Although many more liberally associated activists may roll their eyes at the prospect of gay Republicans, or institutions like the Log Cabin Republicans, Mehlman’s story may be an instructive look at how and why being part of even the institutions that are harmful to us.

The brief filed this week won’t change the tide in the cases regarding marriage equality; ultimately, the court has to make the decision based on their understanding of the constitution and legal precedent, not by an issue’s popularity in the legislature. And while unexpected support on gay marriage is excellent, it would be great to also find unexpected support on issues like queer teen homelessness, discrimination in housing and employment, and violence against trans* women of color. But it does mark a major sea change to see Republican legislators and big corporations take action on the side of queer people, and gives us hope that if we keep up the hard work that activists have done up until this point, this might be the first time of many.