Ken Mehlman, who was RNC Chairman between 2005 and 2007 as well as George W. Bush’s campaign manager in 2004, has announced that he’s gay. He says that this knowledge of his identity is fairly new, and he’s only come out to friends and family in the past few months. During his time with the Bush campaign, he generally worked to avoid and undercut social issues, and worked to expand the Republican party’s message to groups it hadn’t 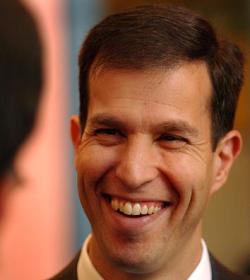 traditionally appealed to, like Latino/a voters. In recent months, he’s also been working as a strategist and fundraiser for the American Foundation for Equal Rights, which legally opposes Prop 8. He’s agreed to answer questions on his private life in order to become an advocate for gay marriage, and says he wishes that he had been in this place earlier in his life so that he could work towards marriage equality from within a high place in the party. (@nytimes)

Mehlman has been open to sharing with reporters how he arrived at this moment, and how he feels it impacts him both personally and politically:

“It’s taken me 43 years to get comfortable with this part of my life… Everybody has their own path to travel, their own journey, and for me, over the past few months, I’ve told my family, friends, former colleagues, and current colleagues, and they’ve been wonderful and supportive. The process has been something that’s made me a happier and better person. It’s something I wish I had done years ago.”

In a time where scandalous reveals of conservative leaders’ long-repressed homosexuality dominate the news, it’s heartening and refreshing to see someone who came to this realization about himself on his own terms and in a healthy way, and has been able to reconcile it with his political identity – he is now the most prominent Republican official to come out as gay or lesbian.

Also, this comes amid a bizarre mini-wave of conservative ‘support‘ for gay causes. But it’s also not bizarre, because gay causes make total sense — Judge Vaughn Walker, our Prop 8 hero, was appointed by George HW Bush and has gone conservative historically. We were represented in the Prop 8 case by the same lawyer who represented Bush in Bush v. Gore. Senator Roy Ashburn was caught being gay a few months ago and instead of backpedaling, he just came out and apologized. ARE THINGS HAPPENING IN UNLIKELY PLACES all over the place?!

One must wonder when it comes to their heart of hearts, do the Republicans truly believe what they preach against the gays or is it just that the Ultra-Conservative Right Wing is — well — easy? when you need a big chunk of votes in your pocket, that’s a good place to get them and all you need to do is say you support marriage between a man and a woman. Look at McCain’s flip-flopping on the issue, fore example.

Not all of Mehlman’s party is supportive – old friend and another former RNC chairman Ed Gillespie was quoted as saying “I think most Republicans believe as I do that marriage is between one man and one woman,” he said, “and will continue to believe that,” we’re proud of Mr. Mehlman for sharing his truth and representing our community, and we wish him the best of luck.