Happy New Year, friends! Here’s Riese’s first Gen Q recap of 2023! Also this week, Kayla reviewed Elite season six. Carmen wrote about the new Harlem trailer drop. Riese was disappointed to discover that those two minutes of Kaleidoscope is all there is. Christina wondered if she could make these iconic TV Mean Moms happy. Riese dropped the monthly streaming list. Heather was surprised and delighted by His Dark Materials’ series finale. And Valerie Anne unveiled the updated 100 Best Lesbian, Bisexual and Queer Sci-Fi and Fantasy TV Shows of All Time! 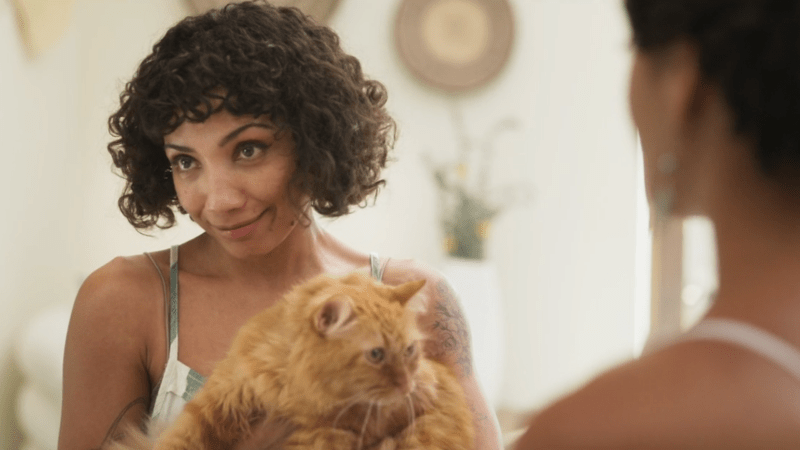 Her character only referenced dating men in the episode but no one who loves a cat this much can be 100% straight.

Fantasy Island is back! In the first episode, one of the two featured fantasies is that of lesbian actress and friend-of-the-site Jasika Nicole, whose fantasy is to know how her cat really feels about her. And, as it turns out, her cat calls her Food Lady and just wants her to be happy. It’s very cute and pure.

Meanwhile, the island’s resident lesbian Ruby gets dumped by her gal pal Gina because Gina thinks they have ‘friend vibes’ and not ‘love vibes’, borrowing phrases Ruby has been using all day. Gina kisses her on the cheek and leaves her crestfallen, but hopefully this means Ruby will spend this season exploring and sewing her baby gay oats.

The trailer for this season teases a lot of fun guest stars, and I’m excited to see what it has in store. Hopefully at least one more Very Special Gay Episode like the one last season’s Pride & Prejudice fantasy.

Willow Episode 7: “Beyond the Shattered Sea”

The last time we saw Kit and Jade, the former was drowning as Elora tried desperately to save her with magic she hadn’t quite grasped. But good news, we didn’t have to wait too long for last week’s cliffhanger to resolve itself as Elora manages to summon the necessary power to free Kit from her watery prison. The adventuring crew continues their trek to the Immemorial City, and on their way, they encounter what turns out to be one of the Crone’s monsters disguised as a helpful old man. During their escape attempt, Kit gets a throwing star to the arm, so naturally, Jade is the one to help her girl out. How, you might ask? By distracting her from the pain with a slap to the face!! It’s oddly sweet and y’all, their faces are SO SO CLOSE.

Later, as Willow and Elora continue their training, Kit remembers the opening scene from the pilot when she and Jade were sparring, and is inspired to pick up where they left off; but this time, she demands that Jade not hold back. And then we get one of the dopest and most beautiful training montages I’ve ever seen. Sure, it’s intercut with the other characters, but the final sparring moments are between our gals, and set with BISEXUAL LIGHTING. They do that sexy thing where they’re talking about the fighting strategy they’re using…while they’re using it, until Kit blurts out the “I love you” that’s been threatening to escape.

And then finally, FINALLY, Kit and Jade get to have the proper kiss that the trolls took from them when they kidnapped Kit. It’s soft and hesitant at first, as if they’re still waiting for someone to rip reality out from under them, but when they finally just let themselves enjoy each other, it’s beyond beautiful. And when I tell you I am ready to fight to the death for these two?!?!?! Whew!

Kit’s seen some real growth since the first time we met her; she’s embracing her feelings for Jade, she finally opens up to Elora about her jealousy of her, and at the end of the episode, she’s the one who encourages Elora to take the necessary literal leap with her to get to the Immemorial City. I love this journey for Kit, and I just hope she and Jade aren’t separated for too long now that she and Elora have found Airk. 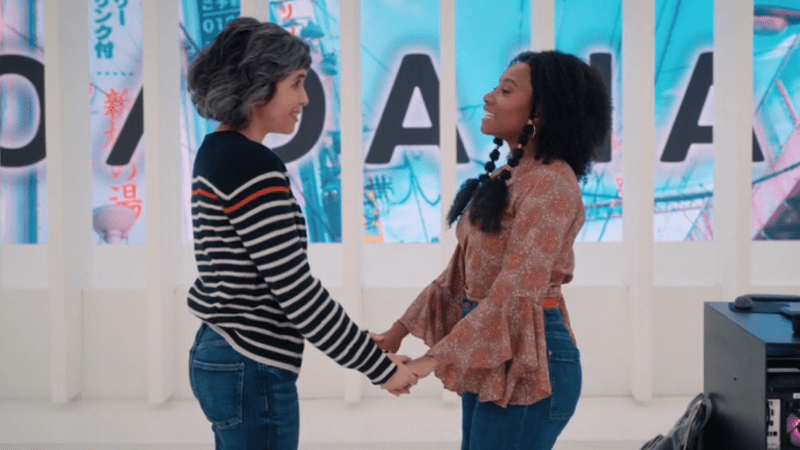 “I had this dream where I was fighting metal beasts…”

In the last two episodes of this season of Mythic Quest, we have some cute moments with our queer couple. Separately and together. In one episode, we learn that the entire accounting team at Mythic Quest is bisexual, and also Rachel gets called a “gay orphan dropout” which made me giggle. Meanwhile, Dana tries to help Poppy with a pitch, but no one seems to be biting on their Playpen idea.

In the finale, Dana reaches the end of her rope with Poppy and Ian and decides to leave the toxic work environment, even though she doesn’t know what would come next. Which is relatable, to me specifically. Rachel got her first bonus paycheck at Mythic Quest, so she’s willing and able to support Dana as she goes on this journey of self-discovery. Rachel suggests Dana become the creative director for Mythic Quest’s new expansion, but instead she’s going to start her own game company, with Brad and Jo by her side, which makes Rachel a little nervous, but she’s willing to support her girlfriend in this venture.

That’s the end of season three, but luckily it’s far from over; the show has already been renewed for a fourth season, plus it has a spinoff in the works called Mere Mortals, which will explore new characters related to Mythic Quest the company and the game, and whose writers include Ashly Burch herself.