Well, my fellow television fans, it’s a brand new year and that means a brand new slate of programing with lesbian, bisexual, gay, queer and trans characters on streaming networks like Netflix, Hulu, Prime Video, Peacock and HBO Max. The main theme of this month’s guide is “this should be queer right???” 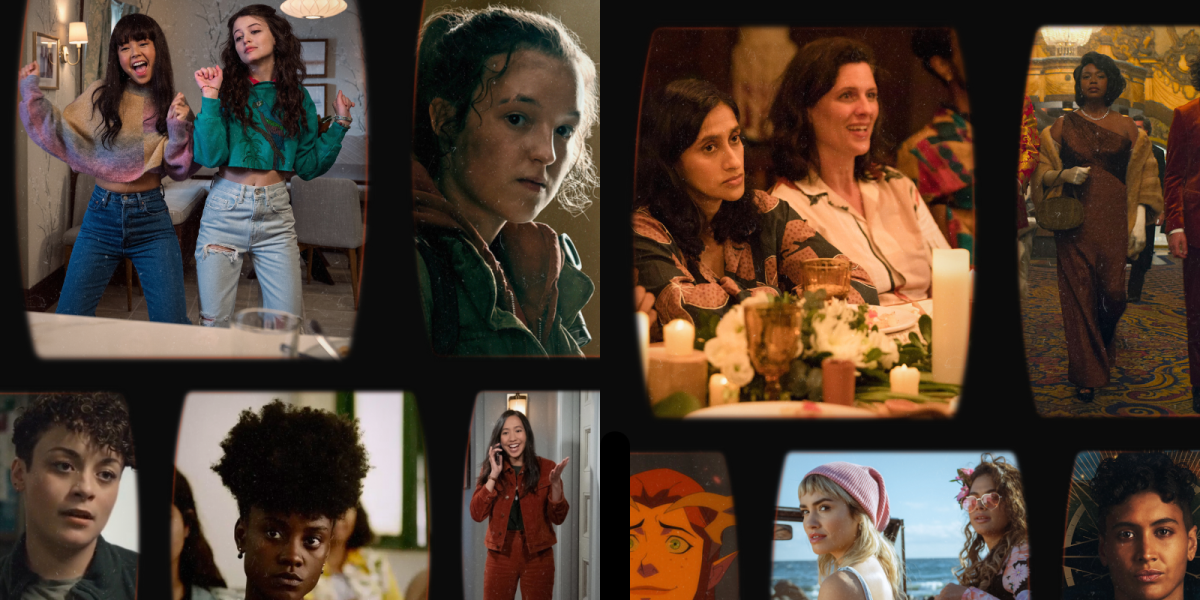 Top: Ginny & Georgia, The Last Of Us, The Drop, Hunters // Bottom: The Rig, Mars One, How I Met Your Father, The Legend of Vox Machina, Sky Rojo and The Traitors

New and Gay and/or Lesbian on Netflix in January 2023

In this Brazillian family drama from writer/director Gabriel Martins, Eunice (Camilla Souza) — a college student ready to leave home and even more ready to explore her sexuality — is one of four protagonists. Writing about Eunice’s relationship with her girlfriend Jo in her rave review of the film, Drew wrote “their hotter than cute meet cute at a club, their dinner with Jo’s wealthy family, the way they love each other in the sort of impassioned yet insufficient way college students love. It all just feels so real. ”

Georgia’s reaction to Ginny and Austin leaving her and Ginny’s new knowledge about her mother’s actual activities are the powers shaping Georgia and Ginny’s relationship in Season 2. We’ll also be learning more about Georgia’s past and her relationship with Ginny’s father and Ginny will be dealing with the fallout within her group of friends from Ginny hooking up with her best (lesbian!) friend Max’s twin brother.

The third season of this Spanish Black Comedy Action Drama about “the impunity, ambiguity and brutal reality of prostitution, and the psychological portraits of those on both sides of the scale” will continue to feature Wendy, described as “a lesbian woman from Buenos Aires who flees Villa 31 and becomes a sex worker in the brothel to make money so she can provide a better life for herself and her girlfriend.”

There are a few more Netflix shows on my radar that I think could have queer characters but I could not confirm, so let me know if you know!: The Lying Life of Adults (Jan 4), Copenhagen Cowboy (Jan 5), Pressure Cooker (Jan 6), Women at War (Jan 19) and Lockwood & Co (Jan 27).

This film is so bananas I can’t believe it got made! Probably Spike Lee’s worst project, She Hate Me is notable for making Kerry Washington bisexual. A man is facing some financial troubles that are not his actual fault and so he decides to become a sperm donor of sorts. His ex-fiancee, who came out as a lesbian after they broke up, sets up a situation in which groups of lesbians come over and pay him $10k each to have sex with him in hopes of getting pregnant. Words cannot describe the horrors of this movie.

Shot entirely on an iPhone, this iconic film follows two trans sex workers, Sin-Dee and Alexandra, on Christmas Eve, as just-out-of-jail Sin-Dee tracks down the pimp/boyfriend who’s been cheating on her and Alexandra’s on a journey towards her singing performance that evening.

Alanna Ubach is Noreen, a lesbian in love with a completely oblivious Marcia Brady, in this delightful satire that finds the original 1970s TV family plopped into the 1990s.

The Rig: Season One – January 6

This character-driven mystery follows the crew of the Kinloch Bravo oil rig as they must come together and fight for their lives after a fog cuts off all communication, stranding them in the harsh waves of the North Sea, no rescue helicopter of supplies on the horizon. Rochenda Sandall plays lesbian character Cat Brainwithe, and queer actor Emily Hampshire co-stars.

It’s been nearly three years since season one of this Nazi-hunting dark comedy set in the ’70s starring Al Pacino and Logan Lerman concluded its first season and now it’s finally back for its final one. In Season Two, our titular hunters must reunite to track down Adolf Hitler himself, who’s hiding in South America. Jerrika Hinton returns as Millie Morris, a lesbian who is investigating the Hunters. She had a really touching coming out storyline in the first season and now she’s back and out and proud.

This “D&D liveplay game turned adult animated series” amped up the queerness of the original campaign the story is based on, with several queer female characters and promises of more to come in Season 2.  Bisexual actor Stephanie Beatriz plays queer character Lady Kima and nonbinary actor Stacey Raymond is nonbinary character Bryn. Valerie described it as “funny and boisterous and you don’t have to know a thing about D&D to enjoy it.”

Writer-director Crystal Moselle’s 2018 indie Skate Kitchen was the inspiration for super-queer and unfortunately short-lived HBO series Betty, and it shares the show’s same five central characters. “Nina Moran’s Kirt was explicitly gay in the film and is explicitly gay in Betty, and she is a soft butch comedic delight in both,” wrote Drew in her review of Betty.

Velma’s lesbianism was confirmed as cannon in October’s Trick or Treat Scooby-Doo!, but the animated series premiering on HBO Max may not have gotten the memo, which apparently has been described as a love quadrangle: Velma (Mindy Kaling) has feelings for Fred, Shaggy has a crush on Velma, and Daphne (Constance Wu) has “complicated feelings” for Velma. Also, Daphne has lesbian Moms! The cast of voice actors is teeming with queer women including Cherry Jones, Jane Lynch, Fortune Feimster, Nicole Byer and Shay Mitchell.

The Last of Us: Season One Premiere – January 15

Based on a video game franchise heralded for being the first with an LGBTQ+ protagonist, our fingers remain crossed that HBO Max’s hotly anticipated adaptation will maintain that representation and also delicately navigate some of the original’s queer tropes. Taking place 20 years after the destruction of modern civilization, The Last of Us follows hardened survivor Joel, who’s been hired to smuggle 14-year-old Ellie (aforementioned protagonist, played by Bella Ramsey) out of an oppressive quarantine zone. But! What starts as a small job soon becomes a brutal, heartbreaking journey across the U.S. as they must depend on each other for survival. Apparently Ellie’s sexuality wasn’t confirmed until Last of Us II, and considering that she is, after all, 14, who knows how much queer stuff will be in the first season! Also I don’t really know what I’m talking about if we’re being honest! Storm Reid plays Ellie’s best friend Riley, whomst in the game does eventually become her more-than-friend.

One of the world’s most impressive feats of reality television, this absolutely bananas concept — some method has determined whomst of a group of contestants are “the one” for each other and it’s up to them to figure it out — debuted an entirely bisexual cast in 2019. The world was never the same! If you haven’t watched this yet then I am so excited for you.

This film from Angela Robinson, about the triad relationship between psychologist William Marston, the creator of Wonder Woman, his wife Elizabeth and their life parter, Olive Byrne, has everything: hot sex, a man who doesn’t suck, history, feminism and school!

Lex (Anna Konkle) and Mani (Jermaine Fowler) are a happily married couple trying to have a baby in this cringe comedy that finds them in a tropical location for their friend (and apparently Lex’s ex-lover!) Mia’s (Aparna Nancherla) lesbian wedding to Peggy (Jennifer Lafleur). But immediately upon arrival, Lex drops Mia’s baby (don’t worry it survives!), an event that puts a damper on the nuptials and initiates a spin-out of “recriminations, passive-aggressive behavior and uncomfortable tension” amongst this longtime group of friends.

How I Met Your Father: Season 2 Premiere – January 24

We don’t know much about the second season of this Hulu original spin-off from How I Met Your Mother, but the show, which stars Hillary Duff as Jesse, also features Tien Tran as Ellen, Jesse’s adopted sister who started the first season after moving to New York from a small farming town following a separation from her wife.

Peacock’s Lesbians and Bisexuals of January 2023

The Traitors: Season One Premiere – January 12

I saw the first six episodes of this show and I LOVED IT SO MUCH! This ten-episode Mystery-of-the-Week series from Rian Johnson follows Charlie (Natasha Lyonne), a grizzled former Poker champion with the extraordinary ability to tell when somebody’s lying. Following her friend’s murder, she hits the road in her Barracuda and encounters “a new cast of characters and strange crimes she can’t help but solve” at every stop. Although Charlie’s sexuality isn’t addressed (at least not in the first six episodes), there’s lots of queer characters encountered along the way and the truly stunning list of guest stars includes queer actors Clea Duvall, Rowan Blanchard and Cherry Jones.

Apple TV+ Getting Gay in January 2023

Potential Queerness on AMC+ in January 2023

Following up October’s super-gay Anne Rice adaptation Interview with the Vampire, AMC+’s next entry in the Anne Rice multiverse is Mayfair Witches, and showrunner Esta Spaulding confirmed on the TCA tour that the show will be “very queer,” telling the press, “it was a complete and total priority for us, and we want, you know, our audience to look at this show and look at all of the characters in the show and feel that they see themselves, whoever they are; that the show is inviting and inclusive of every point of view and … everybody who watches it.” The story is focused on a young neurosurgeon who learns she’s the heir to a family of witches and must navigate the intricacies of a sinister presence that has been shadowing her ancestors for generations. According to a review of the first book in the series, “several of the female witches had some bisexual experiences.”