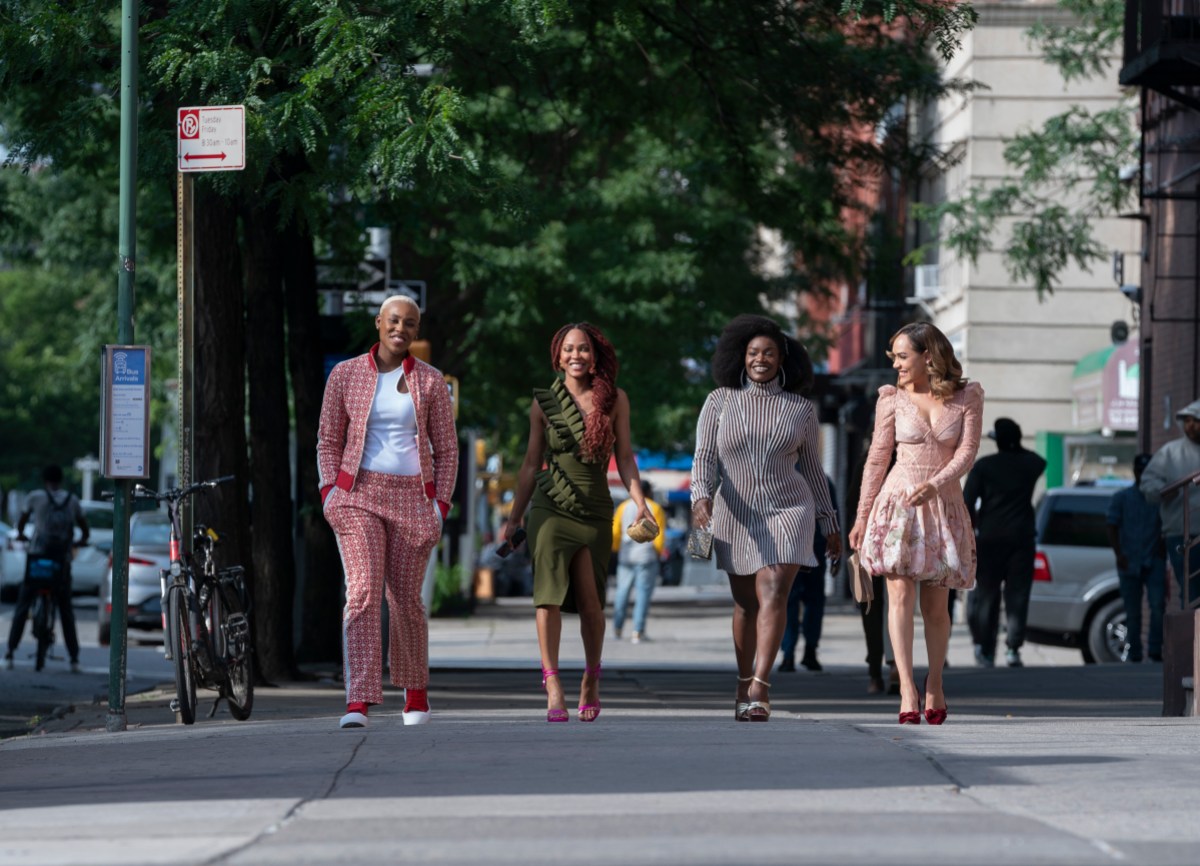 I do appreciate how this visually says “we are a Black gay Sex and the City” without using words.

The days are short, the nights are long, and the air is freezing. Winter’s the perfect time for comfort television (I know, this is not “new” news) and by that measure, there’s no better pure “comfort television” than Harlem — which is returning for its second season on February 3rd, on Prime Video.

If you missed the first season of Harlem, it follows four single 30something friends as they navigate careers and love and sex in New York, and OK! It’s not particularly recreating the wheel at face value (is that not also true of all great comfort TV?), but it has delightfully warm and believable friendships at its root, which is exactly what you want when you’re looking for how to pass time underneath a blanket with good take out. Meagan Good, with her decades of rom-com experience, is the leader of the crew. For our gay purposes there’s also Jerrie Johnson’s Tye — a stem lesbian who… we’ll say… makes good use of her sex dating time — and Grace Byers (Boo Boo Kitty, for anyone who remembers Empire) as Quinn, who came out as bisexual in my favorite slow burn arc of the first season.

Now that you’re all caught up! The trailer for Season Two does a hat trick — it’s funny and gay as hell, in a Black ass show about friendship that’s pulling from the direct lineage of Living Single and Girlfriends (aht! aht! aht! You thought I was going to say Sex and the City, didn’t you? We have our own lineage, thankyouverymuch!).

From Quinn making her own Pride outfit and immediately getting clowned by her friends, to Tye getting called out online for her hoe activities and hoe tendencies (hoes are your friends, and hoes are your enemies — word to Ludacris), Tye taking Quinn to a sex toy store (“that’s not where those go”), to the eight orgasms zinger… I clocked more gay jokes — perfectly executed, I might add — in these two minutes than most comedies do in a year.

And that’s all before theeee Rachel True, of The Craft fame, makes a cameo.

I can’t wait for February.