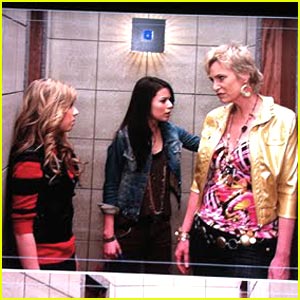 Hi, do you know what Emmys are? I mostly don’t, but I do know that Jane Lynch was nominated for not one, but two of them! One for Glee, obvs, and also for a guest appearance she made on Two and A Half Men, which actually just sounds like a joke. Is that a real thing? Did she actually do that? Did you ever read about the time we watched Two and A Half Men? Why don’t you go do that and then come back, and you will see what I am talking about.

Speaking of TV shows we don’t watch, you better believe your eyes that The Lynch is gonna be on iCarly this week too, which sounds fun.

Anyways, today has been a good day on the Internet because today everyone on the internet has the same feelings we do about Jane Lynch, namely that she can Do No Wrong. For instance, she was given an Achievement Award at Outfest, L A’s Gay & Lesbian Film Festival, and while she was there her (gay!) director Paris Barclay was quoted as saying “The bitch is talented.” Yes. RT. (@ontopmag)

This is what The Lynch had to say in her speech:

I get asked for advice all the time. I don’t why anyone would think I know what I’m doing. My life and my career has been one accident after another. I have just gone headlong, balls-out, and fevered, never coming up for air, for a good bunch of years, and I don’t know that this is very good advice to give anyone. And I know there are a lot of aspiring actors and filmmakers out there, and perhaps they want me to give them words of wisdom or the keys to the kingdom or let them in on the big secret. So I will defer to Carol Brady, who in her infinite wisdom once said, “Find what it is you do best and do your best with it.”

Some lucky Californians and California-visitors got to check out Jane Lynch “In Conversation” at OutFest on Friday:

Also, also, Jane Lynch/Sue Sylvester will be getting her own wax figure at the world-famous Madame Tussauds in NYC! On August 4th, she will join the distinguished ranks of people like Kim Kardashian and classy gentleman Mel Gibson, and have her likeness in wax preserved forever in a building for foreign tourists to take pictures of. Look, here’s a video about it! You’re welcome. Happy Jane Lynch Day! Insert your favorite Glee quote here! (@ontd)

Do you know who Staceyann Chin is? If not, maybe you should. Right now she is doing a really awesome one-woman show called Border/Clash: A Litany of Desires, and if you like #feelings I think you would like it. And really, who here doesn’t like #feelings? (@timeslive) 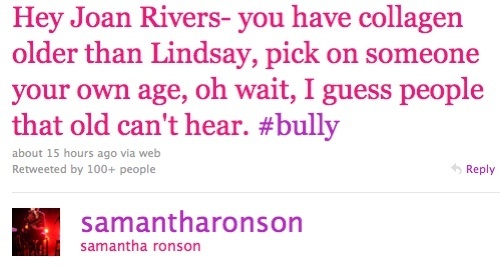 CUTE RIGHT? This is what Joan said:

“I was just reading about the new Lindsay Lohan diet, which is all liquid. 80 proof.”

I guess she got a tattoo on her thigh! (@jezebel)

Sometimes they do cute things, yannow? Like the Manhattan borough president Scott Stringer, who will marry his (female) fiancee in Connecticut instead of his home of New York to protest the fact that gay marriage still isn’t legal there. (@advocate)

What’s better than finally learning the first four bars to John Lennon’s “Imagine” to impress people at parties? This picture of Lady Gaga playing on his famous white piano while hanging out at Yoko Ono’s house! For real it is pretty great! (@jezebel) 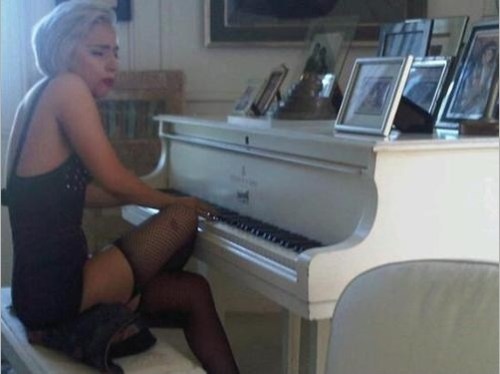 A breakthrough in the study of antibodies that fight the HIV virus may have brought researchers a lot closer to finding a vaccine. (@advocate)