Hey giblets! Happy end of the year! Are you excited for 2012? What are you going to do to celebrate? How do you feel about the fact that the only New Years song that anyone knows is named in gibberish? My answers to those questions are a) yes, b) drink in my basement with my best friend from high school, and c) at least it’s cozy gibberish. We wrapped up the religious holidays with our Christmakwanzakah open thread and moved on to the new year with a year-end roundup, fashion advice from Lizz, and a countdown of
the 10 best LGBTQ happenings of 2011. Four of you needed help this week and Carolyn made cauliflower with sage and lemon. Finally, we interviewed the creator of Russia’s LGBT film festival, Manny de Guerre, as well as the phenomenal people behind Pariah.

p.s. Do you know what giblets are? My grandma really likes them.

p.p.s. I just looked it up: “Auld Lang Syne” is Scottish

The 46834 Maddows Award to Mollie: “Probability of me coming out tomorrow, about 70 Maddow
Probability of me then running off to my girlfriends and not returning till post new years… 100 Maddow.”

The Survival Award to natalie and Brit: 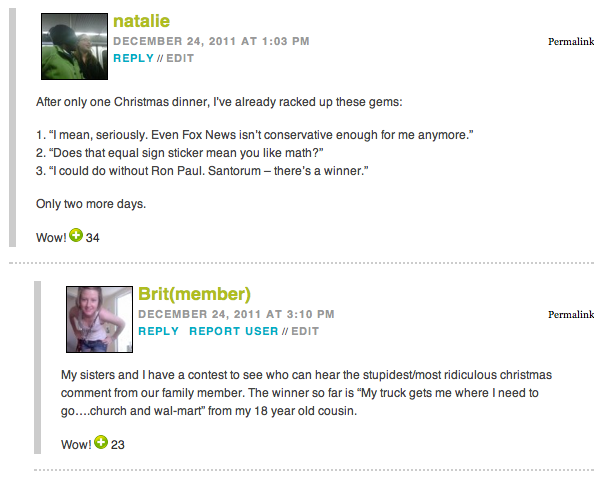 The Megan Looks Good In Everything, Trust Me Award to macmac89: “This is already one of the best holiday seasons ever because I’m on leave and wearing civilian clothes for the first time in two and a half months. JEANS ARE AWESOME.”

The Timon and Pumbaa Award to Katharine: “UPDATE: Dad just told me “fish are just like bugs” in an attempt to get me to eat seafood.”

The Better Than a Hollow Book Award to Beez: 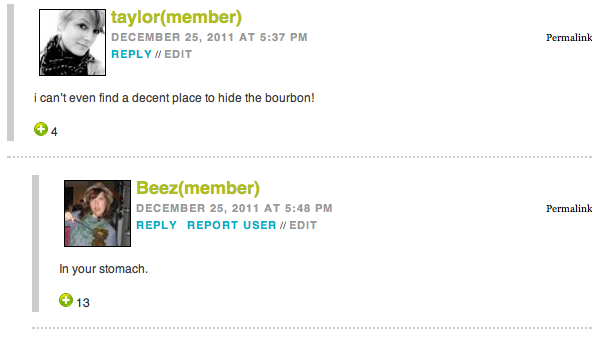 The Best Brother of the Year Award to jb’s Brother: “my 17 year old brother was so excited that i got him “feminism is for everybody” for xmas. best little bro ever!”

The Dad Joke Award to Andi: “An alarm clock that was hidden in my room and woke me up Christmas morning by yelling “get up! do you want to be flipping burgers the rest of your life?!” thanks Grandpa. (I was 12.)”

On Lesbians Wonder Why We Don’t Have Our Own Grindr, Must Settle For Words With Friends:

The YOU DO YOU! Award to wasteunit: “Something like that already exists! Go to google maps on your phone and locate the nearest coffee shop. Yell a catchphrase like “EVAN RACHEL WOOD!” when you walk in and fuck all the people who yell “BISEXUAL!” back.”

On Sarcasm is Better for Your Brain Than Sincerity:

The My Dad Loooooves It When I’m Sarcastic Award to Nina: “See, family? I’m not a hateful bitch, I’m just really smart!”