Tribbng. Blstr. Scissr. Fingr. These are a few names I’ve brainstormed for Grindr’s non-existent lesbian counterpart. Apparently there have been failed attempts before, leaving queer women still waiting on a functional app that provides an easy-to-use mapping of tappable ladies in their vicinity. The apps that are still operational are ghost towns or have comments like, “Hate that it only lets me see girls. I wanna see some guys.” which does not bode well for Brenda’s marketing team. 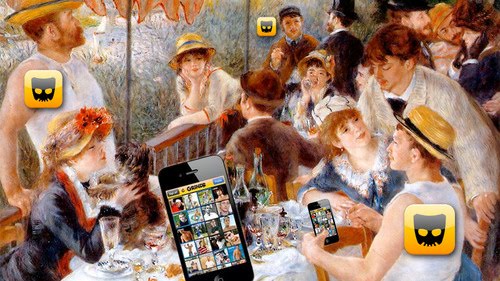 It begs the question: why can’t we have nice things? Why haven’t I been guilted into buying a smartphone by all the outrageous stories my friends have from Fingr? It would be easy to blame the absence on the stereotypical belief that gay and bi men are sex raptors and queer women want to lead near sexless existences on IKEA love seats with their comfortable shoes beneath them and a mildly tolerable cuddle associate nearby, but I think we all know this not to be true. An extremely heteronormative and cis-focused study reveals that a lot of straight women’s concerns about casual sex regard safety and the perceived qualities of a man in pursuit of such things. Perhaps a similar fear of creepy straight guys posing as lesbians is what keeps some intrepid developer from releasing an app just for us.

Everybody's got a random

I don’t think it should matter what percentage of queer women aren’t interested in casual sex begotten from an app or that we may not “be as good” at hooking up with near strangers as gay guys or even heteros. If anyone wants to casually bang the woman 100 feet away that’s doing her Kegels in the frozen foods section, shouldn’t she be able to? Isn’t that her Shane-given right? It’s not mandated that the future app be used the exact same way as Grindr. Maybe it could serve to alert you of the ladies interested in ladies close by. Not all of us have gaydar like Santana. Instead of periodically wondering aloud whether your roommate’s French partner is queerios, you could pull up your handy dandy app and see if her precious face pops up on your grid. Then you casually drop off some French roast coffees (you’re so clever) and flirt it up until your roommate gives you the death stare because this project is like 25% of the grade. The possibilities, you guys! The world may never feel like we’re a target market for casual sex, but if there’s one thing queer women clearly care about, it’s community. Shouldn’t there be an app for that?