In case you missed the news, last week, Kevin Feige and Marvel announced that they would finally be releasing a movie starring a woman, and it’s a Captain Marvel movie to boot! This news, added together with a followup announcement that Captain Marvel would be Carol Danvers and not Mar-Mell, set the internet on fire. Over the past few years Captain Marvel has been gaining a huge following and that following is especially passionate and vocal on the internet. 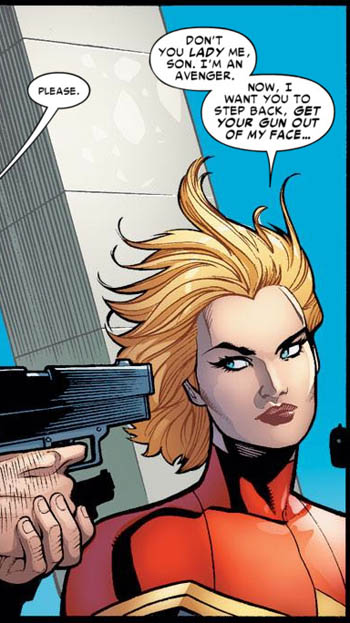 art by Rachel and Terry Dodson

To start with, here’s a little info on Carol Danvers herself. Before becoming a superhero, she was a pilot in the Air Force, earning the rank of Colonel, which means that she actually outranks Captain America. She’s also had a variety of other jobs, working for NASA, Homeland Security and even editor at Women’s Magazine (although I’m not sure how many of those are canon anymore). She got her powers from an explosion involving the original Captain Marvel, a male kree named Mar-Vell (I know, very subtle) which caused her DNA to fuse with Kree DNA. Although her power set has changed slightly over the years, she currently has the power of flight, invulnerability, super strength and powerful energy blasts from her hands.

While Wonder Woman graced her cover back in Sensation Comics #1 and has had the 70-plus years since then to become a cultural icon who is recognizable around the world, the current version of Captain Marvel only started becoming really popular when Kelly Sue DeConnick started writing the character in 2012. It was in that year that Danvers, the former Ms. Marvel, took up the mantle of Captain Marvel and got a new haircut, a new costume (designed by Jamie McKelvie) and a new characterization.

This relaunched version of Captain Marvel had an initial run that lasted from 2012 until 2013 and lasted 17 issues. Issues 1-6 were collected in the Trade Paperback In Pursuit of Flight and issues 7-12 were collected in the Trade Paperback Down. The first few issues show Danvers taking up the mantle of Captain Marvel and then going on a time-travel adventure that helps define who she is as a pilot, a person and as Captain Marvel. Next, she hangs out with Monica Rambeau, a former Captain Marvel, fights some dinosaurs, is told she can’t fly anymore (which is really big deal for her) and rejoins the Avengers. The rest of the issues are collected in Avengers: The Enemy Within and Infinity Companion.

She got another series starting in 2014, but this time she’s based in outer space, which allows her to show off her piloting skills and her interstellar-level powers. Her space travel has seen her spend time hanging out with the Guardians of the Galaxy, trying to save a dying planet with the help of an awesome crew of aliens that includes a pansexual woman-engineer-pilot-warrior and an rebellious and androgynous teenager, and then reluctantly accepting the help of Rocket Raccoon when dealing with the fact that her pet cat Chewie is a rare alien called a Flerken that lays a million eggs at once. It’s one of the best-written comics out there today. 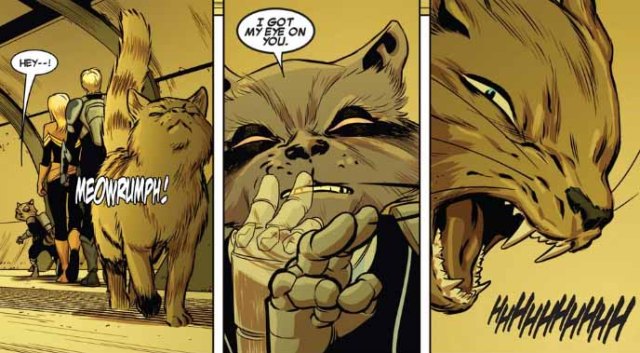 One of the main reasons for Captain Marvel’s huge rise in popularity in such a short time is the hope, spirit, humor and feminist slant that DeConnick writes her with. Fans of the character, who call themselves The Carol Corps, take inspiration from the character and run with it. They’ve organized meet-ups, knitting drives to send hats to anyone who needed some cheer and campaigns to encourage more girls and women to read comics. Many members of the Corps are women, and credit Captain Marvel with either getting them interested in comics in the first place or giving them the courage to become a bigger part of a fandom that is famously hostile to women. DeConnick herself is an outspoken feminist, and encourages members of the Corps to be as well. She hopes that this shows in her writing.

It makes me angry. I was asked in an interview once: “You’re writing another book with a female lead, aren’t you afraid you’re going to be pigeonholed?” Has a man in the history of men ever been asked if he was going to be pigeonholed because he wrote two consecutive books with male leads? Half of the population is women… It’s just this pervasive notion that “white male” is the default and you have to justify any variation from it…

I think we’re seeing another wave of feminism today, a fourth wave characterized by intersectionality and the Internet. And I think it falls right in line that we would see another wave of superheroines coming to the fore. You know, girls used to read comics in huge numbers. And were driven out, I would argue, by stories that actively excluded them. 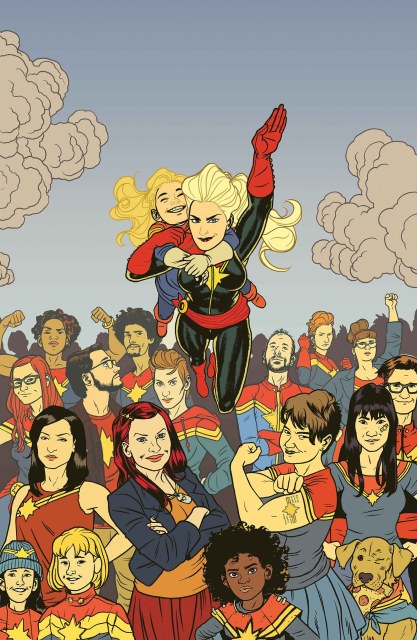 In just a few short years, DeConnick has turned Captain Marvel into one of the most prominent superheroes in the Marvel Universe, a feminist icon and now, the star of her own upcoming movie. If you’re thinking about getting into superhero comics, reading Captain Marvel is one of your best options. It’s fun, it’s action-packed, it’s got a feminist message and the community is the most encouraging one you’ll find. So, if you aren’t already a member of the Corps, pick up a comic book and join today.