The Pacific Justice Institute has been nagging California Governor Arnold Schwarzenegger and Attorney General Jerry Brown to defend Proposition 8, the law that defines marriage as being between a man and a woman and was ruled unconstitutional by Chief U.S. District Judge Vaughn Walker last month, and which has caused us great pain, in our stomachs, hearts and limbs, every single day — the kind of pain that probably won’t go away without medicinal marijuana of some kind, which is the bonus to living in California without rights.

Their argument is that as the AG, Brown isn’t allowed to choose the laws he defends based on his personal convictions or beliefs, and that as the governor, Schwarzenegger’s say trumps Brown’s when there are legal disagreements and so he, too, should be upholding ‘the will of the people’ by defending this crap-on-toast legislation.

So now the institute is going to start harassing the state Supreme Court in order to get a reversal before September 11th, which is the deadline for state action in the Prop 8 case.

“When the people peacefully enact a constitutional provision and the attorney general refuses to give them meaningful review in the federal judiciary, then you have a veto by the executive branch,” said the institute’s lawyer, Kevin Snider. “That is a constitutional crisis, usurping the power of the people.” 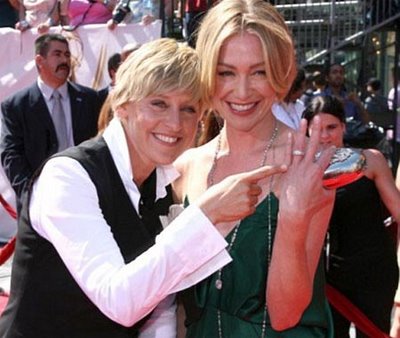 UK: British Foreign Secretary William Hague refuses to step down from his work at the Foreign Office as senior MPs question his handling of recent scuttlebutt regarding Hague’s alleged affair with a male aide. Hague says he wants to get back to work and he and his wife are sick of talking about it. Okey doke.

Cuba: Fidel Castro has said that he is ultimately responsible for the persecution suffered by homosexuals in Cuba after the revolution of 1959.

Canada: A criminal investigation has been launched against four B.C. RCMP officers and three civilian staff members accused of watching women have sex in a Kamloops jail cell.

In our ongoing efforts to keep you up to date with all the ways Republicans are supporting gay people while Democrats play hard-to-get, we are confused to announce that Salt Lake City, Utah, the home of Bluehost and the Mormon Church and also some really fantastic skiing, now has a Gay Republican running for office.

Meghan McCain is making the rounds, saying Republicans get a bad rap, mostly ’cause they oppose gay marriage (Meghan supports gay marriage). Queer Sighted points out that there’s much more Republicans oppose than gay marriage: “While Meghan McCain’s outspoken support of the LGBT community is appreciated, how dare she tell us that the Republican Party “gets a bad rap.” Her party has single-handedly blocked, obstructed, and exploited gay rights for decades.”

Apparently Ken Mehlman is a real trendsetter, because Marriage Equality is Becoming a Conservative Cause according to Pam’s House Blend. A “prominent Republican” was quoted as saying, “I think there is a growing mass of people in Republican politics who are fundamentally sick and tired about being lectured to about morality and how to live your life by a bunch of people who have been married three or four times and are more likely to be seen outside a brothel on a Thursday night than being at home with their kids… There is a fundamental indecency to the vitriol and the hatred directed against decent people because of their sexuality.” Is it possible that social conservatives have finally figured out that leaving other people alone dovetails well with their political philosophy of leaving people alone?