It’s been one of those weeks! You make some plans, you write some stuff, you think you’ve got it pretty much under control and then — out of nowhere — it’s Friday and your biggest homegrown feature story was a top ten list of people only assholes could hate (jk it was the Feminism Roundtable Pt. 2). I mean, it happens. The best laid plans of mice and men or whatever. But you’re cool, right? We put up some pretty solid Daily Fixes, I thought.

So we were sitting on our sofas, drinking sub-par whiskey, counting our nickels and updating our tumblrs (ahem), when we realized, if we were going to end this week with a bang, we’d need a hot lesbian with shiny hair and a complete lunatic with a failed alternative lifestyle haircut. Haviland Stillwell and Riese Danger Bernardo, obvs! 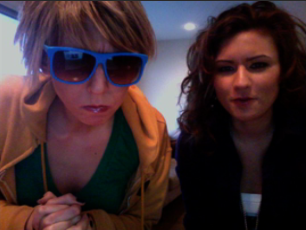 Have you ever experienced the splendor and shenanigans of a Haviland & Riese Vlog? Oh, they’re really something special. See, once upon a time, Haviland & Riese made a video for their friend Lozo who was sick, and it was basically about nothing. But people kept liking the videos, so Riese had to keep drinking in order to handle being on camera so often, and before long, people just like you and me would send very important questions to askautowin@yahoo.com, and then Riese and Hav would put on their best spaghetti-strap tanks and v-neck tees and impart some seriously helpful advice in their H&R Advice Vlogs. Sometimes they did L Word reenactments with Carlytron! Sometimes they did other stuff. Also Tinkerbell was there!

Here are a couple of our favorite Hav/Riese vloggetries to get you started, or take you down memory lane, depending on how much free time you had between 2007-2009. Also, no one’s going to see SATC 2 tonight, so this is pretty much what’s up.

Haviland, Riese and Carly Holiday Vlog #11
This one is about the holidays and wine, which I think is appropriate, given my affinity for wine.

Want more? Want something new?! Look no further!! Here’s a shiny new Haviland & Riese Advice Vlog just for your smiling face! What a way to kick-off Memorial Day weekend! America! Riese never wanted you to see this one because she doesn’t like it. But desperate weeks call for desperate measures, and apparently Sex and the City 2 made $3 million dollars last night, just ’cause everyone wanted to see the girls again, even if it is the worst movie ever made. Right??!