It was very bad, apparently.

Jezebel: How bad is SATC 2? In addition to being “insipid,” “condescending,” and “blatantly anti-Muslim,” it made reviewers experience delirious hallucinations about adding Eleanor Roosevelt as the fifth “girl” or killing them all off in a “heart-rending Death of Spock-type scene.”

Hollywood Reporter: Even in an escapist fantasy, the spectacle of women sinking into this billionaire’s paradise at a time of widespread economic hardship initially seems creepy and off-putting. Soon, however, their Arab sojourn takes unexpected turns. First of all, Carrie encounters her old flame, Aidan (John Corbett), at the spice market, but even more importantly, she and her friends run up against the puritanical and misogynistic culture of the Middle East. The rather scathing portrayal of Muslim society no doubt will stir controversy, especially in a frothy summer entertainment, but there’s something bracing about the film’s saucy political incorrectness. Or is it politically correct? “SATC 2” is at once proudly feminist and blatantly anti-Muslim, which means that it might confound liberal viewers.

Salon: It’s hard to tell what “Sex and the City 2: Attack of the Clones” is supposed to be advertising: Is it homosexuality or Islam? Bergdorf Goodman or Abu Dhabi? Not that any of those products come off too well, but this ghastly, gassy, undead franchise-extender feels like an infomercial for something, and it can’t be heterosexual marriage. That appears to be an endless nightmare from which three of the four SATC gals are struggling to awaken.

Associated Press: Much of the shtick has long since gotten old. Carrie’s running voiceover, the structural thread all along, feels intrusive and pat. Charlotte’s cutesy prudishness seems an ill fit on a married mother of two. And Samantha’s corny puns reach a new low, as evidenced by her reference to a hot, globe-trotting architect she meets in the desert as “Lawrence of my labia.” It’s seriously cringe-inducing.

New York Post: The girls aren’t interested in anything except shopping, drinking and strutting through the desert in slo-mo, but what’s most appalling is that they vamp to “I Am Woman” in this land of sand Nazis. A veil “cuts back on the Botox bill!” chirps Samantha. Har. In Abu Dhabi husbands can legally beat their wives – and Carrie thinks this place is Oz, a cure for her boredom with a zillionaire husband who, she complains, eats too much takeout. (She won’t cook because she’s more “Coco Chanel than Coq au vin.” Waiter: one divorce, please).

The Village Voice: As for Carrie: Sarah Jessica Parker is now 45 years old, and, frankly, I cannot stomach another moment of the simpering, mincing, hair-tossing, eyelash-batting little-girl shtick she’s been pulling ever since she emerged, with considerably more verve and charm, as a high-colonic Malibu Barbie opposite Steve Martin in L.A. Story.

Are we, as women or as viewers in general, just over SATC worldview? Do we care less, collectively, about shoes? Or was this just a very bad movie?

Regardless, the first wasn’t exactly all we’d cracked it up to be either — we mostly prefer friendship or makeover-related montages, set to soft but uplifting music, which accompany some sort of teary moment of our lives or something funny, like the Atlantic City episode!

The jury’s still out on if the first show had anything redeemingly feminist about it, but it did, still, have … well… SOMETHING about it. The show was pretty fucking special.

Because once upon a time, between the talk of overpriced shoes and pre-cum, Sex & The City was revolutionary just ’cause it valued chicks before dicks. It was, at times, even for queers, an inspiring model for a new world where men were certainly a focus, but not the point.

Memory Lane: Sex and the City – The TV Show

1. A friendship montage totally designed to make your eyes water:

Charlotte: “Maybe we could be each other’s soulmates, and then we could let men just be these great nice guys to have fun with.”
Samantha: “Well, that sounds like a plan.”

Samantha learns that she has breast cancer, and tells Carrie about it in a cab on their way to Miranda’s wedding, but Samantha insists on not telling anyone else, lest they ruin Miranda’s special day. But FRIEND-LOVE TRIUMPHS SPECIAL DAYS.

Samantha: I said no tears! Miranda, I expected more from you.
Carrie: See this is what we were afraid of! We’ll talk about this later. Go back to your people.
Miranda: YOU are my people, and we’ll talk about it now.

Because who doesn’t love drag queens, hot dogs, and underwear-as-pants?

You know when that girl has totally fucked over your best friend and you want to punch her in the mouth for all the times she’s punched your best friend in the gut? And you really feel like, should said asshat ever want to weasel her way back into your friend’s life, she will have to deal with you first? Here’s when Mr. Big did that too (starts at 1:05).

Mr.Big: Well I know I haven’t been your favorite over the years.
Charlotte: I wouldn’t say that.
Samantha: I would.
Mr. Big: Well, God knows I’ve made a lot of mistakes with Carrie. I fucked it up many times, and I know that. Look I need your advice. You three know her better than anyone. You’re the loves of her life, and a guy’s just lucky to come in fourth. But I do love her. And if you think I have the slightest change, I’ll be on the next plane to Paris, I’ll roam the streets until I find her, I’ll do anything. But if you think that she really is happy – well, I wouldn’t want to wreck that for her. And I’ll be history.

Miranda: Go get our girl.

5. Season Six finale, last moments. This montage does no wrong.

So did you catch the movie? What did you think? What were your favorite moments of the series? Do you think it’s still relevant? Were you alive when these girls appeared on the cover of TIME Magazine, declaring that the world had changed? It was very scary. Women without husbands. Witches!!! Stone them! 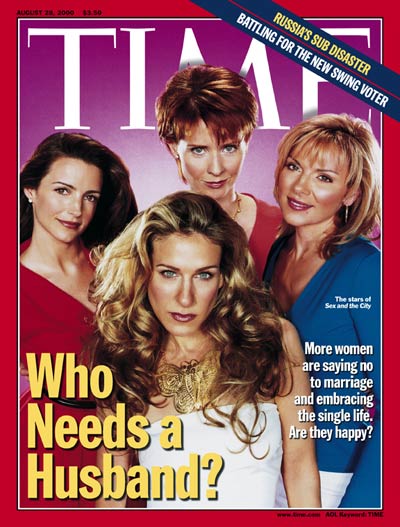