After the White House backed a compromise on DADT this week, Obama was once again interrupted during a speech by a member of the crowd.

“Maybe he didn’t read the newspapers, because we’re working with Congress as we speak to roll back ‘don’t ask, don’t tell,’ ” Obama said at the event for Sen. Barbara Boxer, D-California.

The crowd member was Kip Williams of GetEqual, who sent out a statement about the event last night in which he said:

Today I heard President Obama speak at an event in San Francisco. When he praised Congress for “acting quickly to save jobs” last year, I thought about my lesbian and gay friends who have been kicked out of the military simply for having the integrity to be open and honest about who they are. So I interrupted our President, and I asked him to stop all discharges of lesbian and gay servicemembers until the policy is fully repealed.

President Obama’s response was disheartening. As the police detained and escorted me out of the room, he told the crowd that I don’t read the newspapers. Otherwise, he said, I would know that he’s been working with Congress to move on the issue very soon. But I do read the newspapers, and while it is imperative to pass this bill, it just doesn’t go far enough. As long as lesbian and gay servicemembers are being discharged, we still have a problem — and this bill doesn’t tell us if or when those discharges are going to stop.

Rachel has already summed up our thoughts about stuff like civil disobedience and “heckling” as an activism method. Most of that still stands, but I think the situation is a bit different now. With the compromise, Obama has even further proven his commitment to repealing DADT — we have a lot more evidence of his intent to actually follow through on his promises.

From what I can tell GetEqual is pushing for an immediate executive order from the president to overturn the policy instead of waiting and going through Congress. At this point, such a stance is unrealistic — in my opinion, anyway. Obama is not going to go around Congress, no matter how many times he is interrupted during a speech. He has picked a strategy that may take a year longer, but it will eventually, hopefully, get the job done. And it will also hopefully leave him with some extra goodwill and political capital that he can use on other important issues.

In an ideal world, DADT would already be dead and gone, a relic of how backwards the military once was. But politics is not an ideal world — far from it, in fact. By design, the system requires compromise and slow action. That’s actually a good thing, I think, because it means everyone has plenty of time to think about the ramifications of legislation. Maybe the system seems unnecessary for issues like DADT, but when Congress rushes legislation, things like the Patriot Act happen. This is a matter of opinion, but I would rather suffer a few delays on DADT than upend the system or cost Obama some leverage on other important topics.

After months of waiting, Judge Vaughn Walker announced yesterday that he will hear closing arguments on the Prop 8 trial on June 16.

Once again, the issue of cameras in the courtroom has come up. In January, the Supreme Court ruled that the trial could not be broadcast. But news organizations have asked for cameras to cover the closing arguments. Walker is mulling the decision now.

Queerty has offered up some great reasons why Walker should say no to cameras: 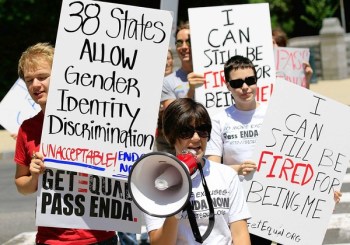 The LA Times has written a really fascinating behind-the-scenes look at trans rights advocacy in Washington, through the eyes of Mara Kiesling of the National Center for Transgender Equality. Transgender activists have come a long way in the last few years — take for example the passing of the Matthew Shephard Act — though victories are still hard won. The Employee Non-Discrimination Act is now the biggest fight on the horizon.

A new Gallup poll shows that Americans are finally at the halfway point on gay acceptance: Americans’ support for the moral acceptability of gay and lesbian relations crossed the symbolic 50% threshold in 2010. At the same time, the percentage calling these relations “morally wrong” dropped to 43%, the lowest in Gallup’s decade-long trend.

That survey has a columnist from the Dallas Morning News wondering when we can stop talking about all this gay stuff, for chrissake. ‘Cause you know, 50% is good enough right? Right. (@gallup @dallasmorningnews)

College courses about gay marriage are popping up these days, to varying degrees of success or failure, especially at Catholic universities. One professor of such a class argues that gay marriage isn’t the black and white issue it sometimes seems: It’s the richness of this debate that renders it such a likely and important subject of academic study, not the fact that the professors teaching the course have a particular political agenda they want to advance with their students. Marriage has a rich and complex history in the United States, one that is tied up in evolving notions of equality, liberty, dignity and citizenship, as well as family, respectability, love and what it means to be an adult. What’s more, almost all recent welfare reform initiatives have included funding for programs that would encourage poor people to marry and teach them how to stay married. Underlying these initiatives isn’t romance and warm and fuzzy feelings about the family, but the state’s interest in privatizing the costs of paying for poor children. (@salon)