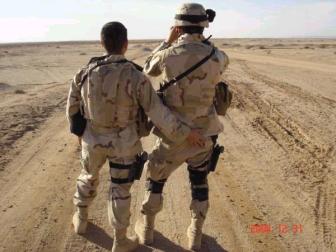 UPDATE: The House has also passed the measure.

On a 234-194 vote, the House voted to advance the repeal as an amendment to a Defense Department funding bill moving through Congress.

The Senate Armed Services Committee has approved the Don’t Ask Don’t Tell compromise that Obama has been working on.

In a closed session Thursday evening, the Senate Armed Services Committee endorsed the compromise, 16-12. The measure still faces a vote in the full Senate. The House, meanwhile, was poised to vote on the compromise by Friday.

The compromise between White House and congressional negotiators would not formally lift the ban on gays until the Pentagon completes a review, due Dec. 1, and President Obama and top Defense leaders certify that ending the 1993 prohibition will not affect military readiness.

It appears that some military leaders are upset that Congress is going to pass this legislation now, instead of when the DADT study is complete. But many proponents have feared that waiting until next session — after the Republicans could get major gains in the midterm elections — could severely hurt the chances of the bill getting passed.

We’re assuming that despite this Congressional action, the hunger strike is still on.

And if you need even more explanation about what the compromise is, here’s Rachel Maddow talking about it (as though we needed an excuse to give you more Maddow):