This is a recap of Good Trouble episode 308: “Trust”

We catch up with Alice this week back at the CBTV diversity workshop and things still aren’t going well. The program’s director, Scott Farrell, persists at being terrible: forcing all the comics to perform the most stereotypical version of their identies and laughing riotously at every turn. 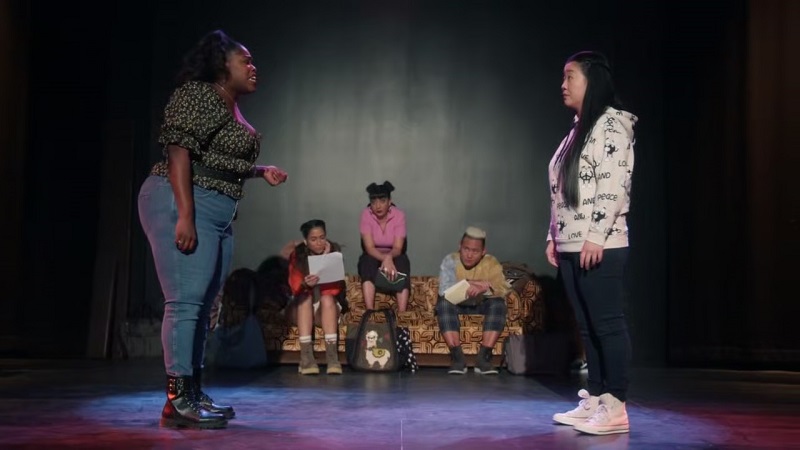 When the program’s black comedienne, Stacey, is performing an improv sketch, Scott asks her to add a bit more sass to her performance. He advises Stacey — whose previous claim to fame was a self-written Riverdale musical — “do it like one of your homies from Crenshaw” and she swallows her pride and does it. And, despite a momentary recoil, when Scott asks Alice to add a little bit more of an accent to her performance, she does that too.

After the performance, Scott calls the comedians together and reminds them that they’re just three weeks away from the program’s final showcase. He continues to pit them against each other — likening the $70k talent contract to the Hunger Games — and promises to make the first of two cuts this week. He urges them not to hold back and to not be afraid to be over the top. Not Derek, though; Scott reminds him that he needs to ground his characters in some semblance of reality.

“Guys, remember when comedy used to be fun?” Magda asks after Scott makes his exit. The group decides to remind themselves why they love comedy by performing their own material at a local comedy club that’s hosting an open mic night. But before they can head out, Ruby slips in — unbeknownst to the other comics — and Alice excuses herself to go talk to her. Only thing? Ruby definitely does not want to talk. She pulls Alice down the corridor, kisses her forcefully and asks if she’s free later. Alice is tired of being Ruby’s booty call so she demurs… but instead of telling Ruby the truth about how she feels about their situationship, Alice lies and tells her she has a date tonight.

Since we met Ruby last season, I’ve loved her swagger. Her confidence juxtaposed with Alice’s awkwardness is what endears them to me as a couple. But the moment that Alice tells her that she has a date with someone else, the veil slips just a little bit… and you see that maybe Ruby’s interested in more with Alice than she’s said previously. Maybe all those boundaries Ruby established when she was still recovering from her last break-up are conflicting with what she’s feeling for Alice now? Or maybe I’m just imaging that because I really want Shannon Chan-Kent to stick around. But, I digress: Ruby kisses Alice again and urges her to not forget about her (as if!) and leaves as quickly as she came.

Alice heads to the comedy club and takes her turn at the open mic. She uses the CBTV diversity workshop as fodder for her new material. She takes shots at Scott for his cluelessness, she chastises the creators of diversity programs for opening doors to the 1950s. It’s all going well until she looks out into the crowd and — surprise! — there’s Ruby, the creator of the CBTV diversity workshop, sipping a beer at the bar. As soon as she steps off-stage, Alice rushes over to smooth things over. Ruby admits knowing about Scott’s problematic tendencies but assures Alice that his track record is solid. 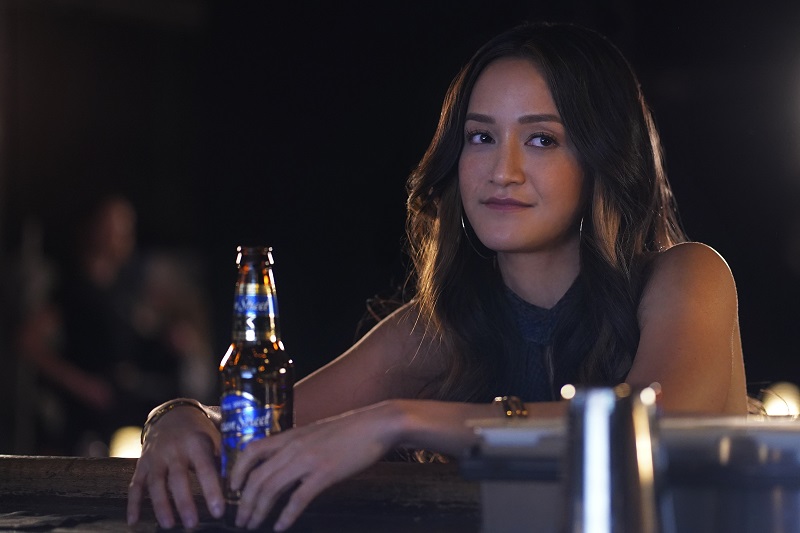 “The truth is, these are the parts out there right for POC right now,” Ruby admits. “I wish that wasn’t the case but the point is to get you all working. At least people can turn on their TVs and see diverse faces, right?”

Alice demurs and Ruby takes the opportunity to shift the conversation back to Alice’s date. Rather that admit that she’s been lying, Alice pretends that Sanjana — a fellow comedienne from the workshop — is her date. Again, Ruby shows a momentary flash of jealousy but then pivots back to what she really wants: another hook-up with Alice. Alice maintains her boundaries and declines the offer… but, once again, instead of telling Ruby the truth, she pretends that she’ll probably just be with Sanjana later.

Of course, later, there’s no one sharing Alice’s bed so later, when she discovers that Derek has posted the video of her set at the comedy club, there’s no one to share in her outrage. She messages Derek immediately asking him to take the video down but it’s too late: Scott’s already seen it and he leaves a 😐 in the comments.

The next day, Alice walks into the workshop, convinced that her days in the program are numbered. Derek apologizes for putting the video up and claims it was a mistake but I’m unconvinced. Scott isn’t a fan of Derek’s brand of comedy and, fearing that he’d be the one eliminated from the program, I think Derek posted the video in an effort to sabotage Alice’s chances and boost his own. But to his surprise (and mine!), Scott takes Alice’s jokes in stride. He commends Alice for her performance and reminds the comics that they have to be able to laugh at themselves. The performance didn’t give Scott any cause for introspection, though, because he ushers Alice on stage to do her Vietnamese nail salon bit.

After class, Ruby stops by again… not for a kiss this time but to break-up with Alice (sort of). Ruby admits that she’s gotten a little too clingy and, if Alice is also dating Sanjana, there’s a potential for things to get very messy. Ruby suggests that they should take a break from whatever they have. Rather than admit she lied about dating Sanjana or confess that she wanted something more than just being Ruby’s late-night booty call, Alice accepts Ruby’s decision and slouches in her seat as Ruby walks away. 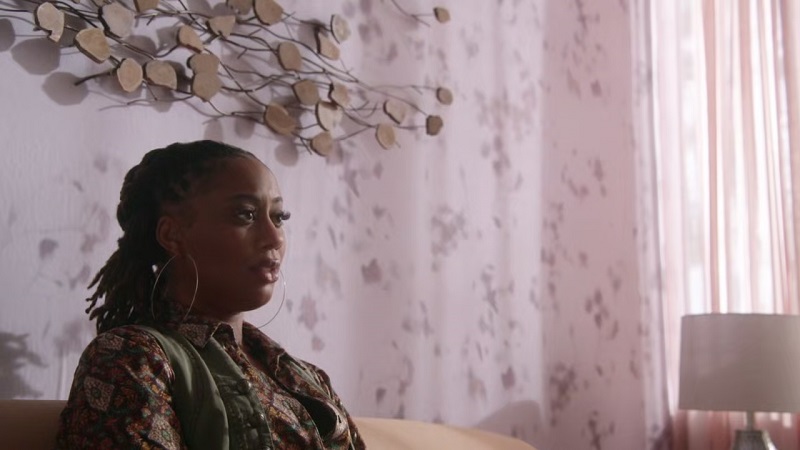 The other person who could stand to be a bit more honest about what they want? Malika, who finds herself on a therapist’s couch this week. Instead of dealing with the emotional fallout from the revelations about her mother — the issues that literally haunted her just two episodes ago — she focuses the bulk of her session on her romantic relationships. Inside the confines of the therapist’s office, Malika is candid about her feelings for Dyonte for the first time.

“He’s kind and supportive. We have a similar story. He just… moves me,” Malika confesses. “I can’t really explain it and I want to be close to him.”

When asked about Isaac, Malika is similarly effusive: “He takes care of me and he makes me feel safe and cherished. He challenges me in good ways.”

The therapist points out the obvious: Malika isn’t confused about what she wants, she wants to have relationships with both of these men. Malika acknowledges that truth but scoffs at the notion that she can have them both. Why can one relationship be enough, Malika wonders, and the therapist asks, “why does it have to be?”

Society’s conditioned us to chase monogamy — a fact that Good Trouble belies with the commentary from Malika’s friends — but, as the therapist makes plain, it’s a social construct. I try not to let the fact that I’m totally invested in Isaac and Malika as a couple distract me from the fact that the therapist is right. For many people, consensual non-monogamy feels more comfortable for them. The therapist explains that some people see polyamory as less of a lifestyle choice and more of an identity or orientation… and that’s when it strikes me how rare this moment is. I can’t recall ever seeing polyamory discussed this way on television… and certainly not with a black woman at the center of the discussion.

“Commitment shouldn’t mean suppressing your feelings or identity for fear you’re gonna lose the person you love,” the therapist explains. “And as scary as it is, not being your authentic self, not asking for what you truly need, that’s what ultimately blows up relationships.”

+ Mariana’s Byte Club is preparing to pitch their new app, Bulk Beauty, but they run into a problem: Gina is awful at it. They try to avoid telling her directly in an effort to spare her feelings but when they ultimately settle on eliminating Gina’s speaking role all together, their feelings about Gina’s abilities are clear. Gina’s less bothered about the commentary on her pitching — she can practice and get better at that — and more concerned that, already, their relationships are being hampered by an inability to be direct. It seemed like a good opening for Mariana to be honest about her relationship with Evan but she let it go… and it’s hard to imagine it not blowing up in her face down the road.

+ With Jerod’s case handled, Kathleen Gale and her associates move onto a high-profile murder case. Jamie’s warning about Kathleen being investigated by the FBI continues to rattle Callie a bit… so much so that she reaches out to her former colleague, Ben, to get the scoop on the investigation. But, after bonding with Kathleen over the premature loss of their (biological) mothers, Callie drops her pursuit of more information. She opts to take Kathleen’s advice — “when they rattle you, you rattle them right back” — and posts a cropped photo on Instagram of her and her co-worker looking friendly. And, of course, who sees that picture soon after its posted? Jamie. Consider him rattled.

+ I loved the layers they added to Kathleen’s character this week. They are fully leaning into the Mommi vibe and I am here for it.

+ I complain a lot about Good Trouble‘s tendency to overstuff episodes with storylines but this episode felt like it struck a really good balance. Mariana, Callie, Alice, Malika and Gael (w/ Davia) got storylines this week that all advanced their season’s arcs and none of them felt rushed or shortchanged.

Next week on Good Trouble: No, Gael… please… don’t.