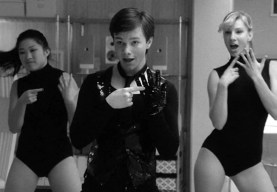 Oh Kurt. Poor gay Kurt. His dad (played by Mike O’Malley!) busts in on him doing a little “Single Ladies” for YouTube so he lies about being on the football team (?), so then he actually, you know, has to play football. He shows up with musical accompaniment and then KICKS THE SHIT out of the football. Obvs we all saw this coming, Kurt’s like the new kid in town who will unwittingly lead the Bad News Bears to victory or something.

The Lynch gets a segment on the local news show which makes her even more insane than usual (including, but not limited to,  bribing the principal) AND she accuses Will of getting a perm, which is too funny. The newspeople tell her that they heard she’s losing Cheerios to the Glee club, so she goes on the offensive, which is awesome. She goes to visit Sandy, who has a creepy apartment full of dolls and kimonos (naturally). 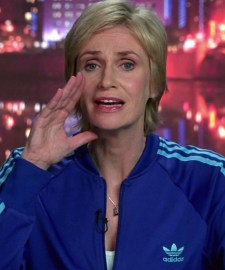 Sandy is miserable and The Lynch makes him an offer he can’t refuse: she tells him she’ll hire him as Director of Arts if they can come up with a way to destroy Glee club, so naturally they hold tryouts for Cabaret, hoping that the combined draw of Liza Minelli and a Celine Dion audition piece will draw Rachel in.

“Natalie Wood was a Jew, you know.” – Rachel

Meanwhile, at Glee, Rachel gets SUPER DUPER MAD AGAIN at Mr. Schue for giving Tina her solo in “Tonight” from West Side Story so she storms out and auditions for the lead in Cabaret, which she easily lands, and so she tries to quit Glee. Mr. Schue does a crappy job of convincing her to stay and in the end she quits to be in the play full time. 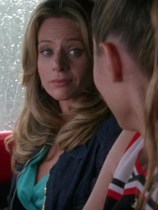 This week in parallel storylines, Quinn and Teri are both using pregnancies to get what they want out of their respective men. Teri’s batshit crazy sister tells her to keep lying to Will and in the meantime, they’ll find her a baby. Hm, I wonder what baby she’ll stumble upon… oh! That’s right, Quinn’s ACTUALLY pregnant. She tells Finn that he’s the babydaddy (some bullshit about a hot tub, zzzz) and he cries on Mr. Schue’s shoulder. Sadface. The men have food together and talk about their feelings. Finn learned how to use a library this week, you guys, aww! He wants a football scholarship so he asks Will to teach the football team how to dance, which will cause them to win and then want to join Glee (this is some really roundabout crazytown logic here but I’m with you Finn!) so he agrees.

So everything gets gay and Will and Kurt attempt to teach the football team the choreography to “Single Ladies,” which goes… about as well as you’d expect it to. THENNNN things get very melodramatic after-school special because HEY GUESS WHAT Quinn’s babydaddy is in fact Puck, not Finn. Oh heavens. I knew that hot tub thing was bull. 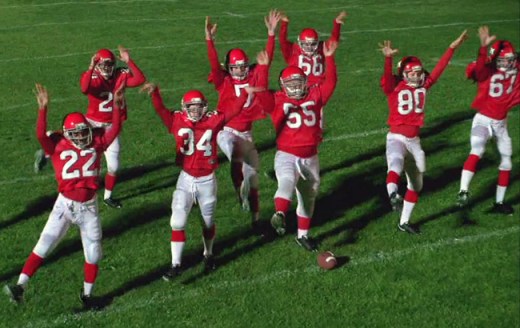 Will makes the mistake of telling Teri about Quinn’s baby so she somehow sneaks into her car in the rain and ambushes her! Like, who are you, Sylar? How did she get in there? Does no one lock their car doors at this school? I had a teacher who never locked her car doors and one time one of my classmates moved her car to a different parking lot. Ah, high school. Anyway! Teri is totally going to take Quinn’s baby. Bitch is out of control.

Ok so then it’s GAME TIME and the Bad News Bears are like, “we do not want to be gay losers so we’ll just be regular losers,” but just as the clock is about to run out they decide to do their big gay play after all and OF COURSE they score a touchdown and OF COURSE Kurt kicks the winning field goal. Everyone is crazy stoked and Will and Emma have an awkward/cute moment.

Somehow Finn’s assbackwards plan works and Puck and two other football dudes join Glee (one of them was dancing extra gaily, so I knew he’d come around. Number 34 in the dance routine. Clearly gay). 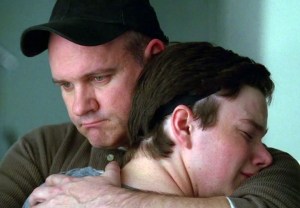 Post-game, Kurt comes out to his father, who tells him he’s known since he was 3.

“All you wanted for your birthday was a pair of sensible heels.” – Mike O’Malley

That might make him a power lesbian, not a gay boy, but I’ll roll with it. I mean, he was 3 and all. So his dad tells him he still loves him, they hug, and I cry Kurt cries.

So by the end of it all, everyone is lying to everyone, everyone is being shady, everyone has MANY FEELINGS and I guess that makes sense, since it’s high school. I feel like I’m still amazed this show exists, and it keeps getting better and better. Predictable? A bit. But it’s high school. People have been making shows and movies about high school for decades now, things will get recycled. Glee manages to put a new spin on an old formula and it works. Also this episode had far less singing than previous episodes, which bummed me out. And for those wondering, Jayma Mays continues to be adorable.