Welcome to the 18th recap of the fourth abysmal season of Glee, a show about a family of donkeys running a profitable amusement park franchise and a bunch of good-looking kids in Ohio who like to sing about being losers and the first-ever giant potato to enroll in a non-existent University mid-semester! It’s sort of like Punky Brewster, but with more animals. 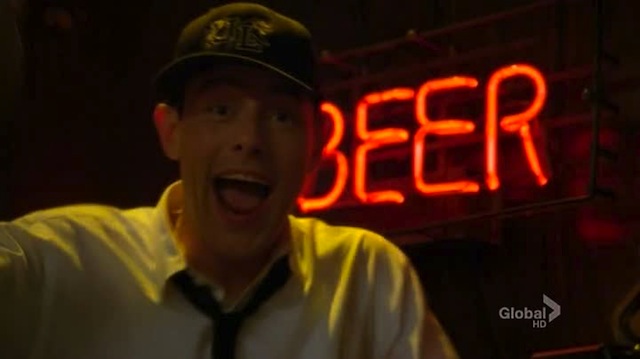 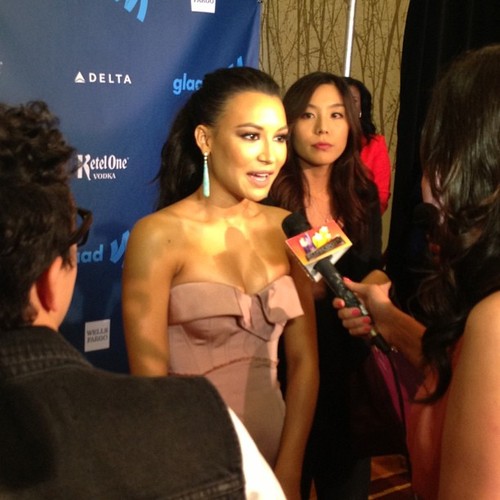 Also, look how cute these kids are! 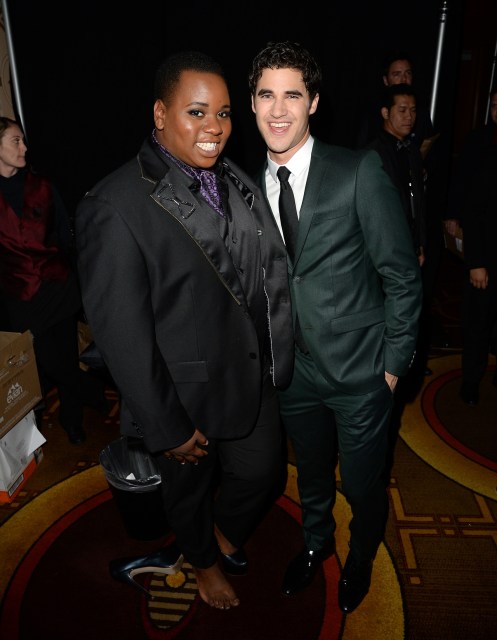 Well I guess we better leap into this recap, eh? FYI, Glee‘s being renewed for another two goshdarn seasons. For anybody keeping score at home, the following lesbionic programs never made it to Season Five: Lip Service, Sugar Rush, South of Nowhere, The Real Stupid L Word, Gimme Sugar, Exes & Ohs. If you wanna see Lesbian Executive Realness on your television box, may I suggest moving to Canada, home of Degrassi, Lost Girl and Bomb Girls.

We open in the deep sweet valleys of Lima, Ohio, where Finn has enrolled (mid-semester, apparently?) at The University of Lima, the lowest-ranked school in The Imaginary Ten, a prestigious group of imaginary academic institutions including but not limited to Joey Potter’s alma matter Worthington University, the esteemed UC – Sunnydale, California University (a historic vestige of academic excellence, the former home not only of Bette Porter‘s brief career in academia but also the thriving social lives of a rag-tag gang of rowdy youths from Beverly Hills 90210 and a similar assemblage of white people known as Saved By the Bell: The College Years), Degrassi-gateway-school Smithdale University, The Xavier Institute for Higher Learning, Felicity’s beloved University of New York,  The University of Los Angeles (Carlton Banks both attended and served as school mascot) and Cosby favorite Hillman University. 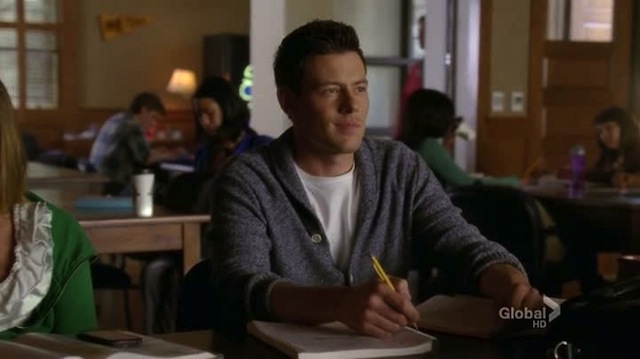 definitely made the right choice wearing that buttplug to class today

Lima U, howevs, isn’t like those Universities, or even like a real University, or even like anything real that has ever been real ever in the history of realness. At Lima U, classes, study halls, pleasant strolls on campus and alone time in one’s dorm room are repeatedly interrupted by a rabid band of Harlem Shakers in bikinis. 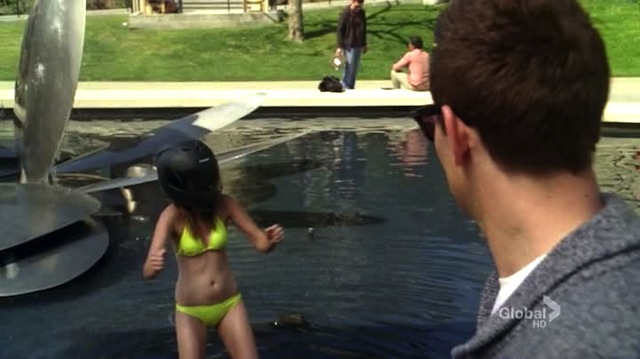 only moments later, this girl will fall backwards into that pool and then everybody who made fun of her for wearing a helmet will feel like a total asshole

Much like Ye Olde Gangham Style, I’d avoided even the most preliminary knowledge of the Harlem Shake prior to its inclusion on Glee, at which point I was forced to look into it. Much like Glee itself, the appropriation of this dance is racist. So there’s that. 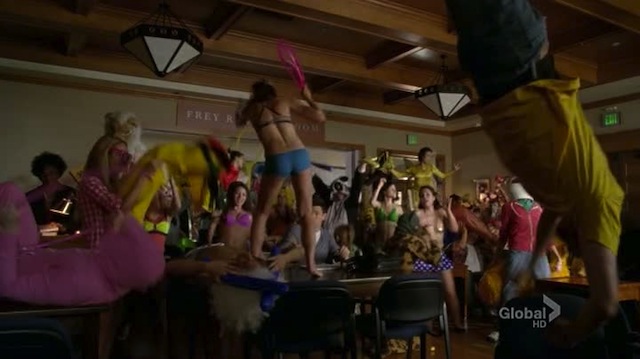 Finn returns to his dorm room, which’s also packed with half-naked teenagers doing their own interpretation of the Harlem Shake. 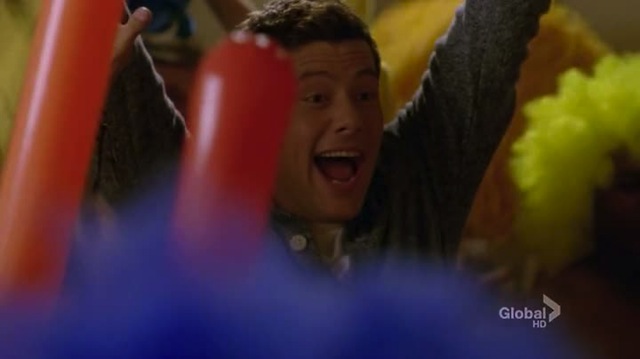 i went number two all by myself!

When the Jimmy Eat World music video extras clear out, Finn notices that his roommate has vanished and been replaced by… 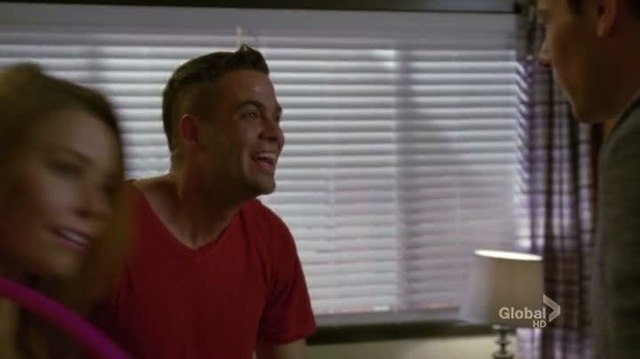 …Old Man Puck! Old Man Puck’s not here to take classes, he’s here for “my bro, some brews, and the bountiful Bettys.” Judging by that language, Puck’s approximately 75 years too old for this nonsense.

We then slap on our shin guards, lace up our cleats, put band-aids over our earrings and run a mile, another mile, and then a lot more miles until we reach New York, New York, where The New Rachel is preparing for her Funny Girl audition by looking at herself in the mirror in different hats and looking at her Barbara Streisand shrine. 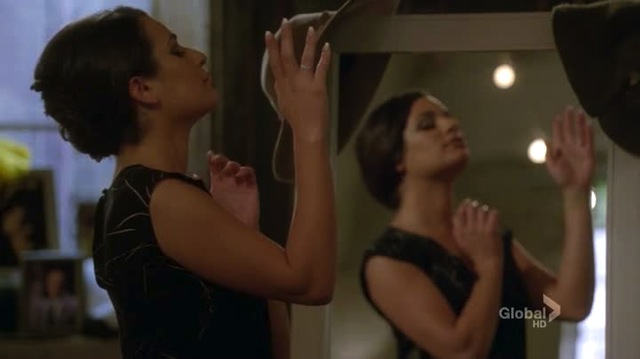 Rachel’s sworn off men and dedicated herself to this audition. Mhm. That’s what all the girls say about why they swore off men. Audition, aushmishon. 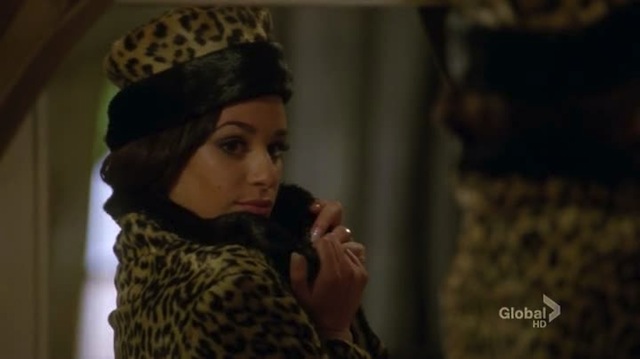 After some orange wedges and a pouch of Frui-ttastic Capri Sun, we land back in Lima for an adult scene, and you know how I feel about adult scenes. 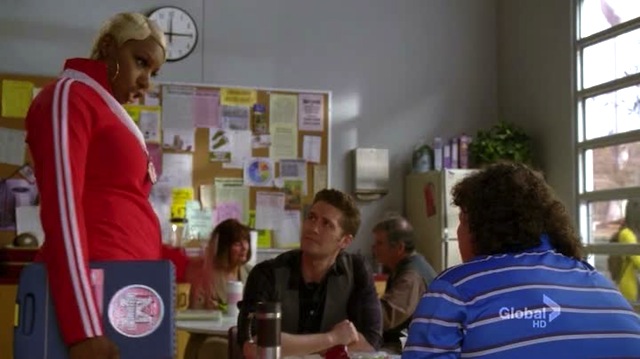 The most important part of this scene is that NeNe Leeks, the new Cheerios coach, tells Beiste and William that she heard gunshots all the time in the ghetto and they need to move on. Also, Beiste compares Will’s relationship with Finn to her relationship with her sister and says he should reunite with his starchy friend. Thrilling!

Back in the hallowed hallways of McKinley High, Marley-Kate monologues that she’s snatched her songsheets from her bottom drawer and is on the road to becoming Joni Mitchell. 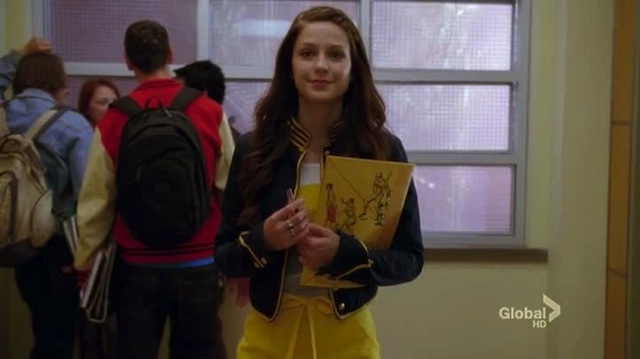 Marley-Kate says everyone’s got PTSD now, so Sam has an imaginary Australian twin brother and Unique is taking birth control because that’s what all the cool trans kids are doing to “turn their Bs into Ds,” and Tina is dressing like “steampunk” because that’s what all the cool kids are doing, and then Sam is on the phone with his smart twin. Also, MIT is recruiting Brittany. 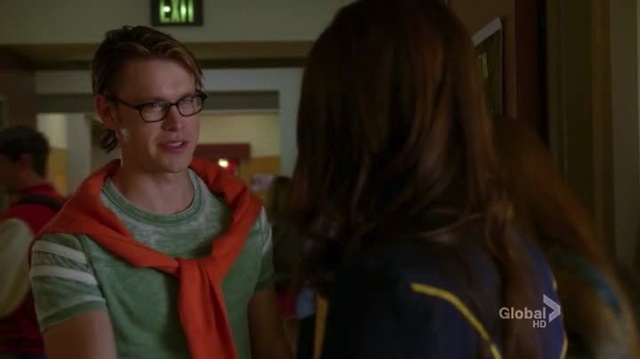 Marley says Unique shouldn’t take birth control pills, and I kinda wish they weren’t throwing this idea out there into the world sans context, ’cause Unique’s yet to broach the topic of HRT or whether or not she has access to a trans-friendly health provider and it seems a little irresponsible to start (and end, so far) that conversation with this? The internet’s got 245 conflicting opinions regarding the safety of transgirls taking birth control pills, but I think it’s pretty unanimous that Loestrin is unlikely to make a difference in her rack. Do any of y’all have a definite answer on this? (Also, do any of y’all know of a transgender woman who writes about Glee/Unique regularly? I’ve been combing the internet for three weeks and come up short, the closest I’ve found is a tumblr by a girl who is dating a trans* woman, I think? I’d love to hear a trans* female perspective on her portrayal.) 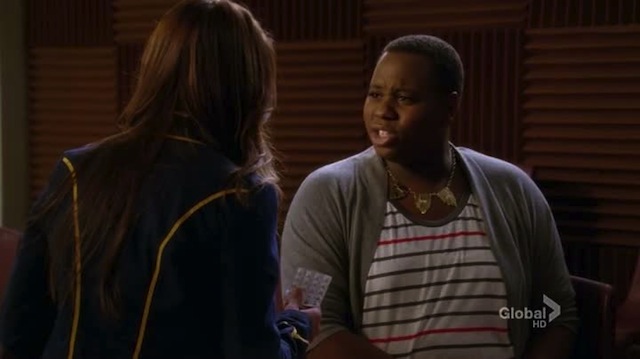 Tina’s Steampunk phase, however, is delightfully reminiscent of her fashion-forward Season One attitude, and besides somebody’s gotta pick up the Ridiculous Outfit torch that Lady Hummel left burning a hole in the Glee Room’s linoleum. 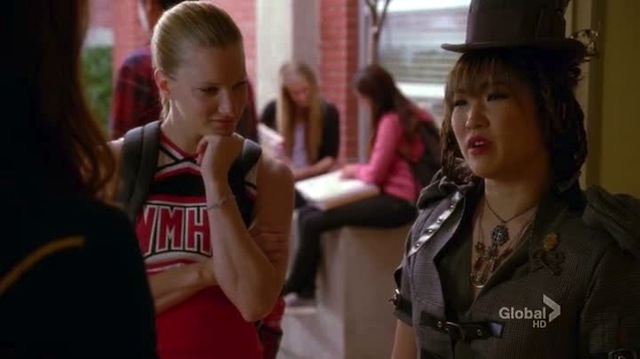 Then Mr. Shue pops in with his marker to write DREAMS on the Whiteboard, ’cause that’s the theme for Regionals, which has been 2-3 weeks away for 2-3 months. They’ll be doing “Dream Weaver,” “You Make My Dreams Come True,” and “Sweet Dreams.” Marley suggests they do original songs ’cause she wants them to do her original songs from her secret box, and Mr. Shue shoots her down. I wish he’d shot her downton. 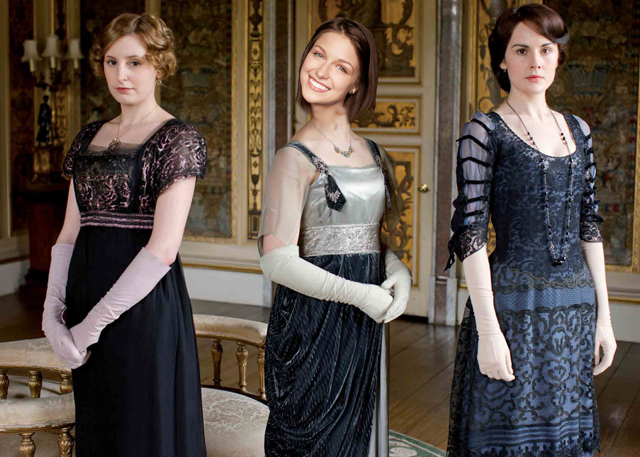 Cut to Glee Club Secret Meeting, where everybody’s gathered to discuss how much Mr. Shue’s setlist sucks. Artie suggests doing “current songs” and Marley suggests doing original songs, like the songs she wrote, and Fake Quinn says nobody wants to hear a song about a fat mom. 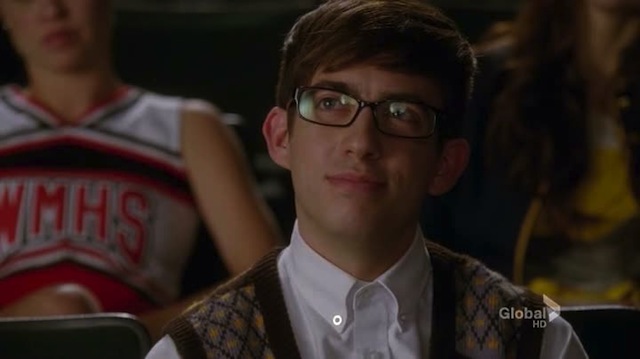 you know i’ve never really felt gay before, but sometimes when blaine talks i just wanna take him out for cupcakes 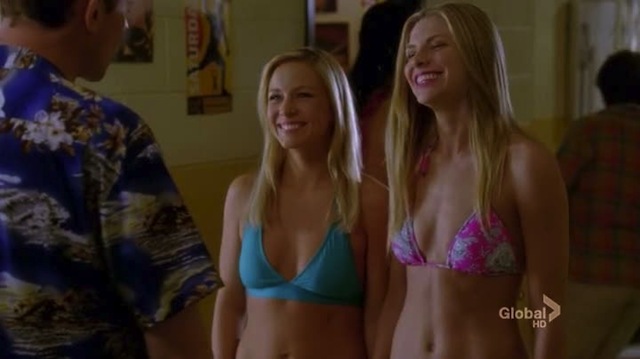 Puck catapults down a Slip-n-Slide while a tater tot in an Aloha shirt forces nubile youngsters to discard their bikini tops to earn admission to his hallway. 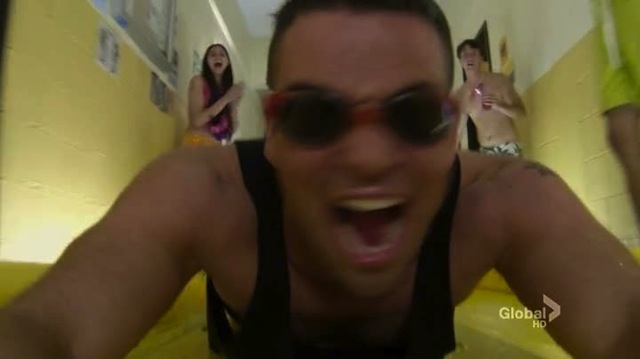 Mr. Shue pops in to grovel and ask for Finn to forgive him for not forgiving him and return to Glee Club, but Finn just acts super-douchey and mega-busy. Then Puck pops in to gush that he’s secured the winsome duo an invite to the Biggest Party of The Year! 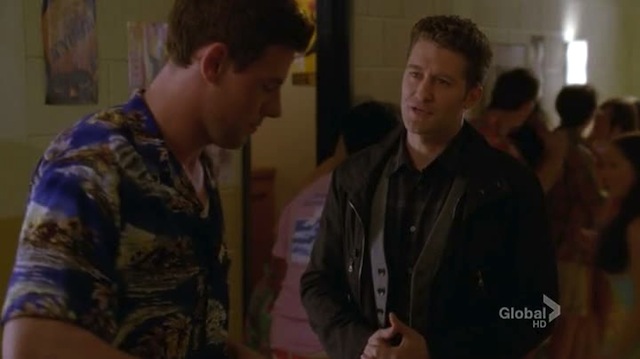 “It’s a nice offer,” says Finn to Mr. Shue, unbuttoning his shirt like a sociopathic dicknail, “But as you can see, I’m busy with college.” 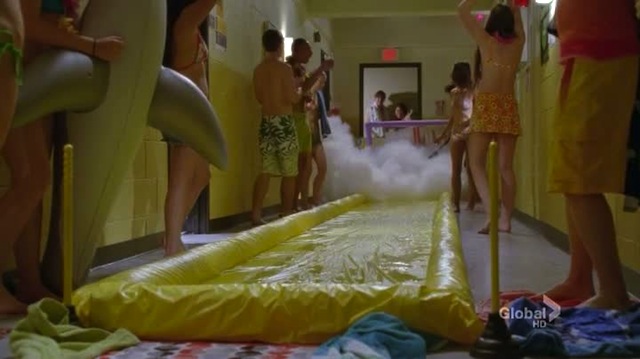 Seriously, Finn’s got this sociopathic dicknail voice that he uses sometimes that literally makes my skin crawl. Do you know what I’m talking about?

Meanwhile in McKinley High’s Glee Room, the children attempt to dissuade Shue from his setlist, which doesn’t go over well. Unique pulls a chicken cutlet from her bra and hands it to Blaine and says, “mm, you might need some woman parts to help you sell that.” 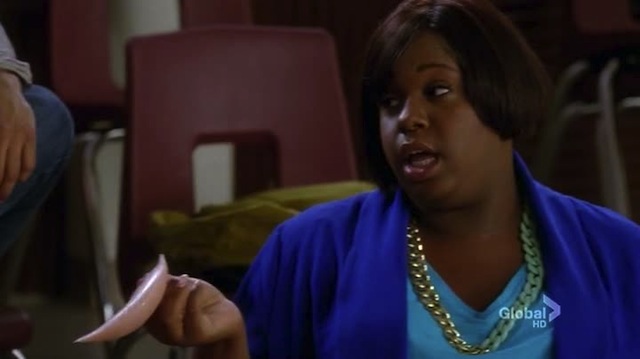 does anybody have a baggie

Mr. Shue: “Honestly I don’t even know what’s going on in this room anymore. Openly defying me? Unique, you need to tone it down with whole boob thing. Sam, we all know you don’t have a twin brother and frankly, it’s distracting, and Blaine, I am disappointed in you for letting this go on.” 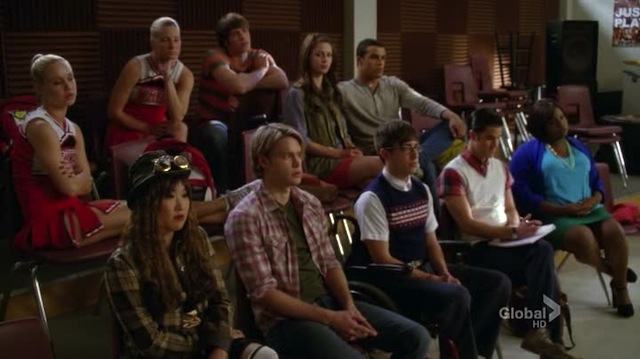 I have this fantasy where the next time somebody says something obnoxious and transphobic or trans misogynist to/about Unique that Marley-Kate will punch that asshat in the face and Unique will just grab a motherfucking chair, stand atop that piece, and belt Wings by Little Mix like a boss. Alas, this world is not my world, it is Glee-world. 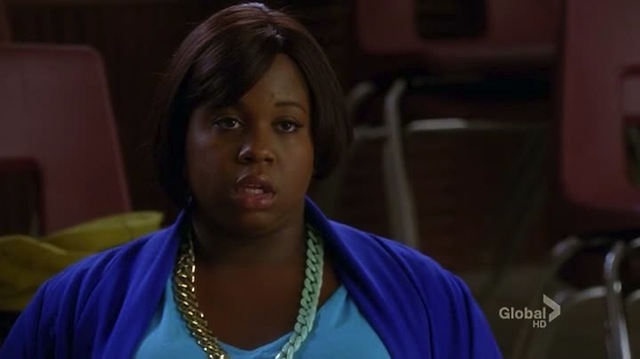 fuck i knew i should’ve transferred to degrassi instead

Mr. Shue says he’s gonna go grab some java and when he returns they better be ready to rehearse his songs, even though everybody knows they never rehearse for Regionals! 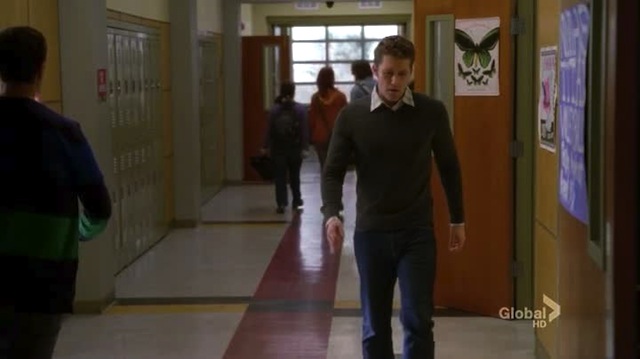 fuck i wish this hallway had a motherfucking slip-n-slide