Despite near-consistent suckage for the entire fourth season, it was announced today that Glee will be returning for two additional seasons! Even lackluster ratings won’t stop Fox from charging full-speed ahead with everybody’s favorite musical potato-mashing program. On the downside, the show kinda sucks. On the upside, this offers two more years for Rachel Berry to use her Metro-North pass and for Santana Lopez to take the train to tuna-town if you know what I mean.

Ryan Murphy is considering mixing things up for Season Five and setting the whole goshdarn thing in New York City… or not? Says Murphy:

“I think what we’re going to do, and I have to wait until that moment to announce, but what we’re going to do with the show is very different. Not everybody will go to New York, because I think that’s really unrealistic. I really like this season, and I liked going back and forth, but I would really like at one point for a huge chunk of them to stay in one location, which we’ll probably do next year. We just started to talk about that.

I loved going back and forth, and I think we’ll always have one foot in both, but I would like a big chunk to follow one particular story that we’re getting ready to launch at the end of this year. It’s going to be a big cliffhanger.”

When asked about the upcoming graduation of Blaine, Tina, Artie and Brittany, Ryan Murphy advised us not to bank on a teary graduation episode because “we’re doing some weird shit on the show, just wait.” WHAT THE WEIRD SHIT HASN’T ALREADY STARTED? THEN WHAT THE HELL HAVE I BEEN WATCHING? Furthermore, Ry-Ry added “I don’t want to do what we’ve done every year, I want to do something different.” Well, that’s a new idea. 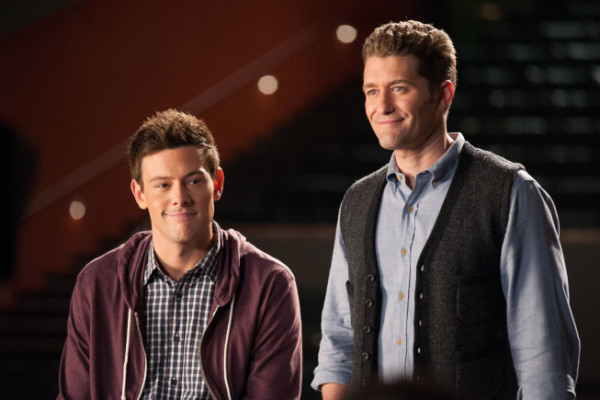 what can i say, we’re just two white guys with lots of brilliant ideas

Lea Michele had already given some lip to the future back in March:

“I’ve heard of one formula for next year that is very exciting. I have an idea of what it is. It’s new and different than what we’ve done this year. You’ll still get to see both locations [– at McKinley and in New York –] because I’m still going to be on the show and so are the kids that are in high school. But who knows what the whole year will be or what the show will morph into throughout the year. It will be very exciting — and I’m not going anywhere!”

Fox’s decision to sign the show on for another two seasons is curious — with this season’s rapid decline in the ratings, you’d think they’d wanna protect themselves from continually steep movements in that direction. But Glee performs well within the 18-39 demo and sells a lot of iTunes singles, though neither of those metrics are performing as well as they used to. Ratings are down 50% from their best season (Season Two), and don’t appear to be picking up. 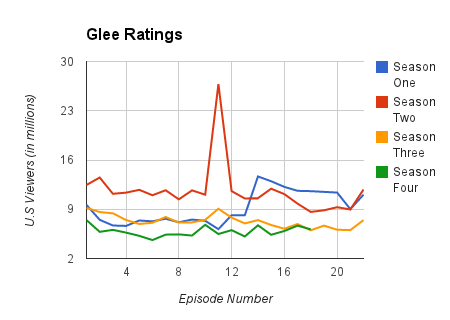 i made this chart using info from wikipedia

Personally, I feel the show lost its charm when it became abundantly clear that almost every external factor in the entire universe mattered more than the characters, stories and lively musical numbers we’d fallen in love with. The most obvious example of this is the prioritization of iTunes sales over making good television, but for me personally it was the inclusion of Glee Project winners that really knocked Glee off its pedestal. (The iTunes thing actually doesn’t bother me at all, but I know that’s an unpopular opinion.) The Glee Project never performed well in the ratings, attracting some passive viewers but mostly a passionate audience of Glee diehards who took Glee seriously enough to wish they themselves were on the program and were therefore willing to endure endless portions of gratuitous Glee back-pats piled on top of traditional reality show nonsense.

Part of Glee‘s magic was that it had found these actors and actresses who were just starting out, who’d been on a few shows or performed on Broadway but just hadn’t had their big break yet. Lea Michele was already famous on Broadway and Glee was obviously a perfect fit, but I already knew Lea, so for me it was performers like Naya Rivera and Amber Riley that really caught my attention. 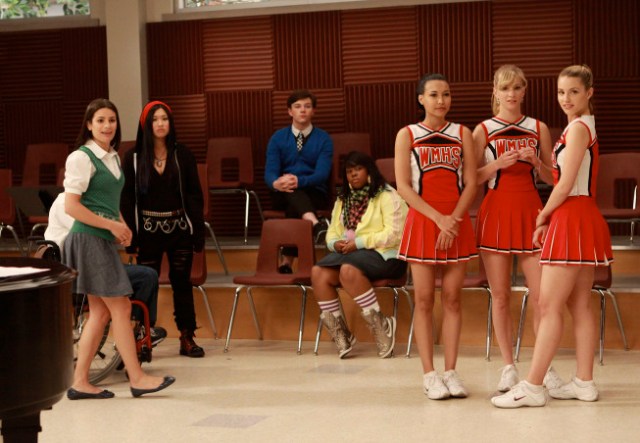 oh hello world, we’re beautiful and talented, would you like to meet us

But when the cast began getting swarmed by nobodies who never contributed in any meaningful way to the show’s plot, cast, or music I felt, as a viewer, kinda… cheated? Like, having this additional media property on Oxygen is more important to y’all then telling a story or developing the characters we care about? Both Rory and Joe seemed to exist only to appease the minuscule cult fan base they’d cultivated on the reality show and their presence in the Gleeiverse was distracting and almost insulting. Although the parallel seems too convenient to be accurate, The L Word made similar missteps as its fourth season began: sidelining continuing stories in favor of piling on heaps of temporary, thrice-removed-from-the-main-cast characters and prioritizing the promotion and integration of OurChart over the quality of the show on the actual television. I’d actually argue that Unique is the only good thing to come out of The Glee Project because her character, while thus far totally handled poorly, at least filled a void. But the three skinny straight white boys all up in my eyeballs? NEXT. 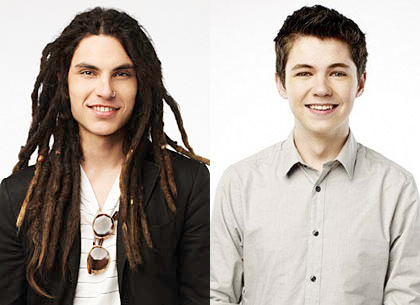 I imagine hiring unknowns is key to keeping costs down, however. When the show debuted in 2009, it was reported that episodes cost upwards of $3 million each to produce, 50 percent more than the average prime-time drama. The demanding musical numbers mean each episode takes 10 days to shoot, which is 25 percent longer than the norm. Ryan Murphy told The New York Times even then that Glee intended to earn back its money by selling “several soundtracks a year.”

In that same 2009 Times article, Murphy notes that producers have “already been approached about a “Glee” tour with the cast, a film and a Broadway show” and, furthermore, that there’s “even talk” of “Glee on Ice.”

Now that’s a Season Five I’d gladly tune in for. 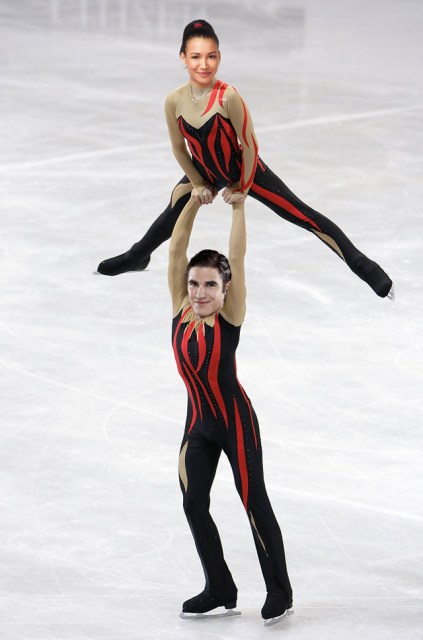 all signs point in this direction