Hello and welcome to the thirteenth recap of the fourth abysmal season of Glee, a comedic romp about what happens when a tight-knit group of musical adolescents eat nothing but Noxzema for an entire year and stop wearing underwear. The weirdest part, to be honest with you, is the Potatonik steering the ship, and the second-weirdest part is all the faces these kids keep making: 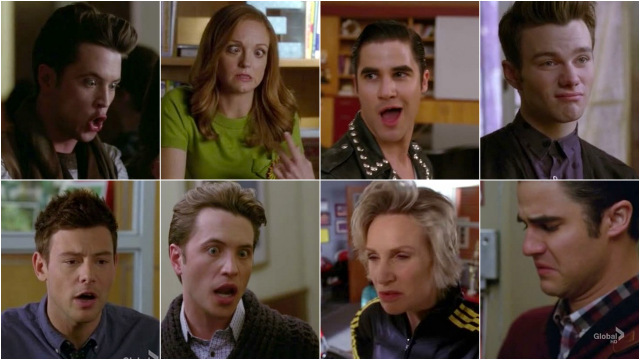 Anyhow, this episode everybody fought over who could wear the most rhinestones and dead animals at the same time. It was called “Diva,” named after, OBVIOUSLY, Diva Cups. I prefer ob tampons, but to each her own. For example, Marley-Kate prefers Tampax Radiant for some reason:

Anyhow, enough about vaginas, it’s time to talk about Glee!

We open in what appears to be an actual classroom at Fake Julliard, wherein Bitchy Gay Boy #1, Bitchy Gay Boy #2, Kurt Hummel and ten or so extras of indiscriminate age are enjoying Free Sing, which’s absolutely nothing like Free Swim, FYI. 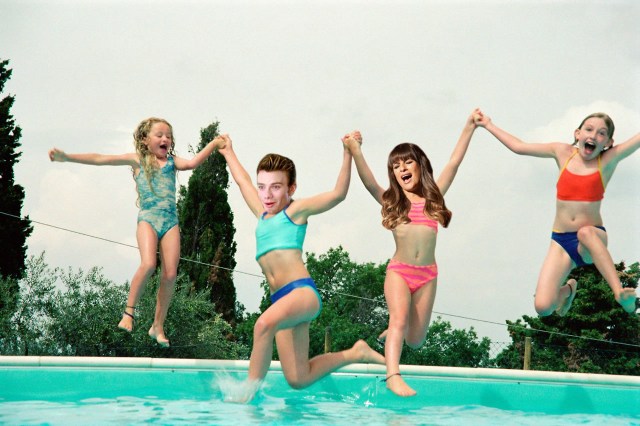 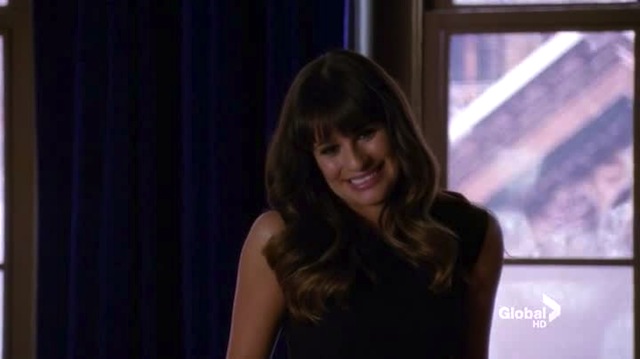 Kurt monologues that since The New Rachel’s triumph at Winter Musical Lalala Singing Lilting Lyrics Showcase Time, her insufferabiltiy level’s been on blast: she hogs the pool during Free Sing, uses all the hot water, clogs the sink with the stringly discards of her Ombre situation and likely commits a dozen other water-related crimes. She probably pees in the ocean, too. That’s what divas do. Divas pee in the ocean. 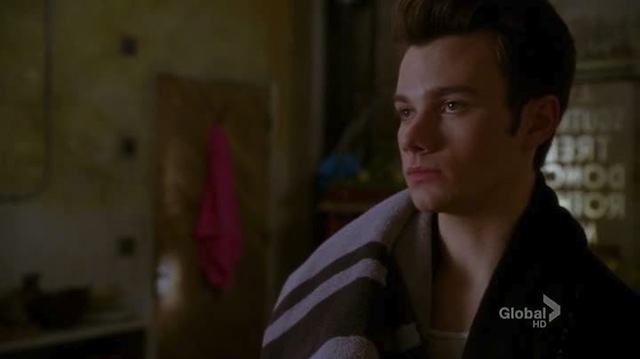 i cannot believe she peed in the wonton soup again, that diva bitch from hell

Furthermore, says Kurt’s brain, The New Rachel surrounds herself with “sycophants,” aka Bitchy Gay Boy #1 and Bitchy Gay Boy #2, who, by the way, insist Rachel must audition for the Funny Girl revival ’cause she was “born to play Fanny Brice.” 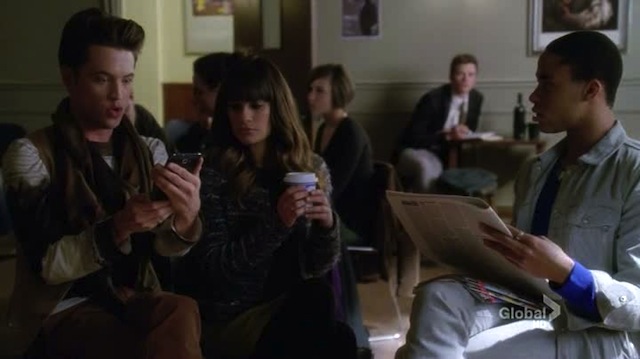 omg rachel you have to see this beyonce gif!!!

Kurt has a plan:

Kurt: “This Sarah Brightman in training needs to be knocked down a few pegs and I’m the only one who can do it.”

Mhm. You know who else has a plan? 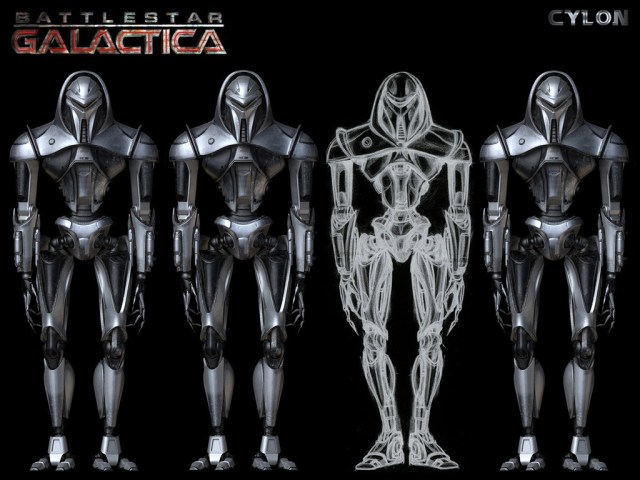 We then adorn ourselves in fluffy snowsuits with generous hoods and sled all the way back to Lima, Ohio, home of the Apollo Career Center, where Emma’s advising Finn that the solution to his “we need a powerhouse like Rachel/Santana/Mercedes to win Regionals” problem is to host an internal Diva-themed competition. 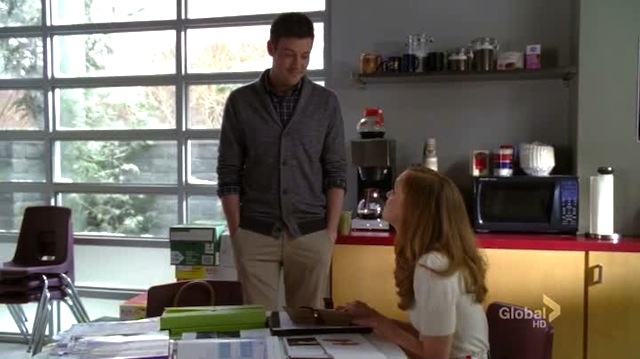 you bet these are dockers, baby

Basically, everybody will have to put a Diva Cup inside them, and whoever fills theirs up the fastest; wins. Just kidding! It’s just gonna be like all the other episodes but at the end somebody will get a prize and it’ll probs seem a tad arbitrary, but we’ll enjoy it just the same! 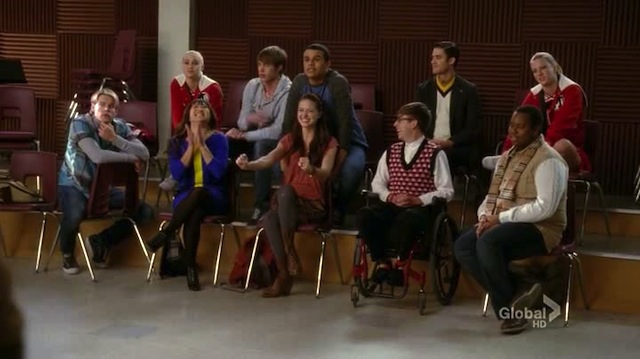 everybody cheer like he just said ‘we’re selling taffy!’ 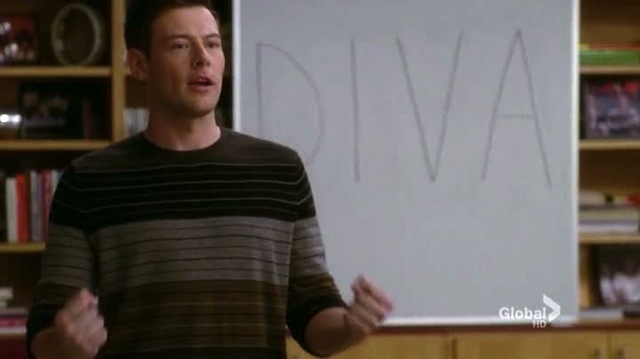 personally, i find my inner powerhouse to be somewhere in my right foot, like maybe between my sock and my shoe

Emma: “Diva. The online Urban Dictionary defines a diva as “a fierce, often temperamental singer who comes correct. She is not a trick-ass ho and she does not sweat the haterz.”
New Puck: “Great, so I guess the guys are screwed this week.”
Blaine: “Um, guys can be divas.”
Emma: “That’s right, we all have inner divas. I myself have been considered quite a diva at many a local restaurant because I know what I want and I will send a dish back.”

Unique suggests her classmates better step off because there’s only two ways to spell Unique, and one of them is “D-I-V-A” which, for the record, definitely does NOT spell “Unique.” There’s only one way to spell Unique. This show is confusing. 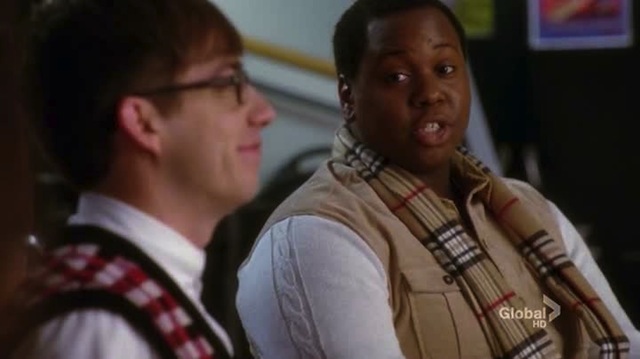 and, despite popular opinion, there is actually only one way to spell “riese”

Also confusing: why is it okay for Tina Cohen-Chang to say “I have more diva in my little finger than you have in your whole angry inch, Wade-Unique”? Here’s the answer: IT’S NOT, which’s why Marley-Kate’s immediate assertion that Tina’s “unchecked” smack-talk is “about to end” is encouraging to us  — is Marley-Kate gonna take a stand against transphobia? Haha just kidding, her smack-talk is about to end because it’s time for a musical number! 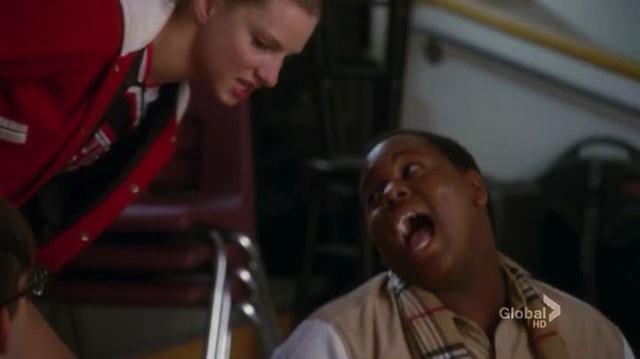 iiiiiiii ate all your frosted flakes!!!! 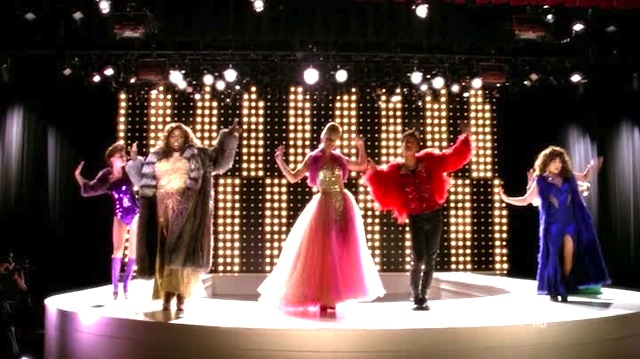 this would make a good line of special edition barbie dolls 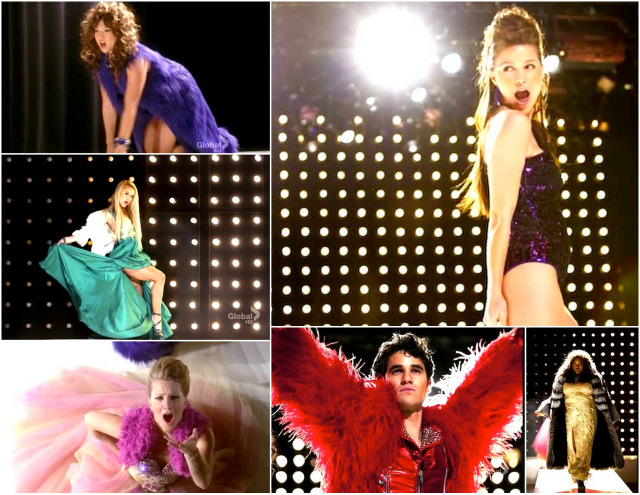 We then return to The Glee Room…

Emma: “…and that is how I made the manager cry at The Cheesecake Factory. For being a diva.”

Aw. Emma is such a critter. 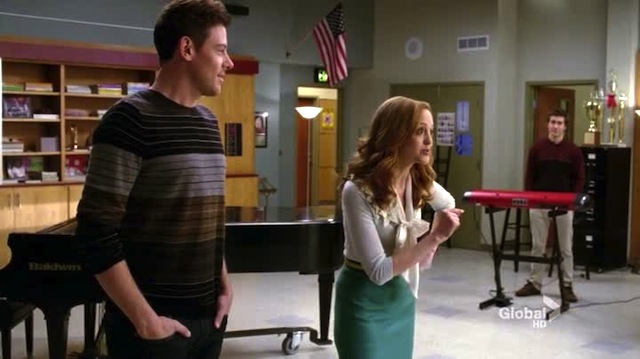 and that’s why i’m the number one critter of the week!

Starsweep over all of the things in the whole world until we arrive at the Barbie Dreamhouse Bushwick Loft, where Kurt’s had just about enough of The New Rachel’s demands for tea with a wee bit of honey. The duo begins squabbling, because it’s the Diva Episode. 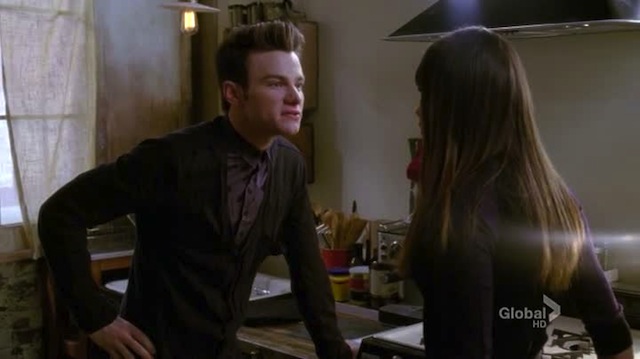 Kurt dishes out some real talk about The New Rachel’s attitude, likening it to old-school Lima Rachel, but Rachel’s really in full-throttle-bitch mode today. She reminds Kurt that she got him into Winter Showcase in the first place, and Kurt counters that despite her “win,” HIS performance was the one “everybody” was talking about. And by “everybody” he means tumblr. 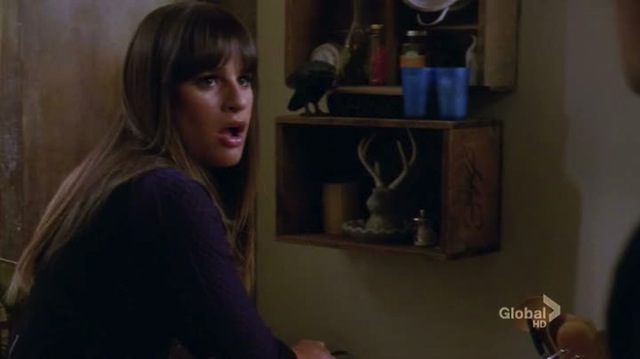 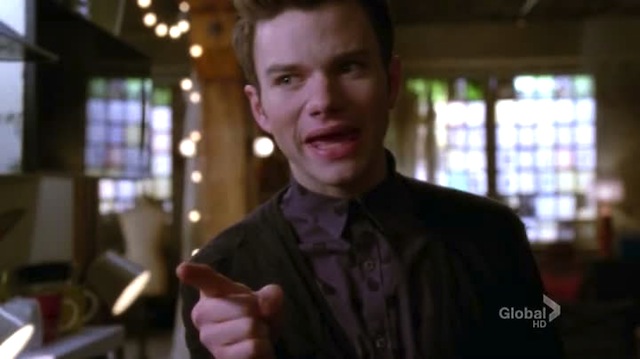 and i don’t care how close we are, don’t you ever steal my lube again

Kurt blasts back that the only reason Rachel beat him in Season One’s Diva-Off is ’cause Kurt threw it on purpose, hoping to save his father the humiliation of having to watch his son sing a lady-song or whatever wacky plot situation they pulled off that week. Rachel is “crushed” to hear this, having based her entire ego apparently on that one episode. Weird. 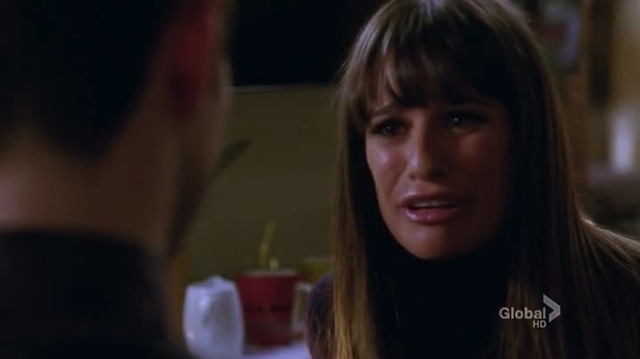 how could you? you said we were going to watch battlestar together, from the start, and now you tell me you’re already on season two? 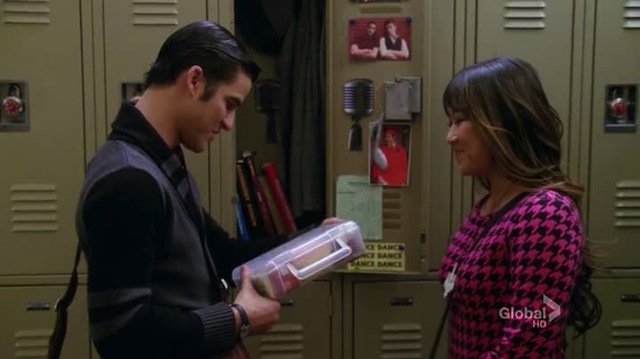 aw, “the object of my affection”! my favorite film!

Back in the Glee room, Blaine, dressed like a Village Person, catapults into animated life at the piano for a rousing rendition of Queen’s “Don’t Stop Me Now.” 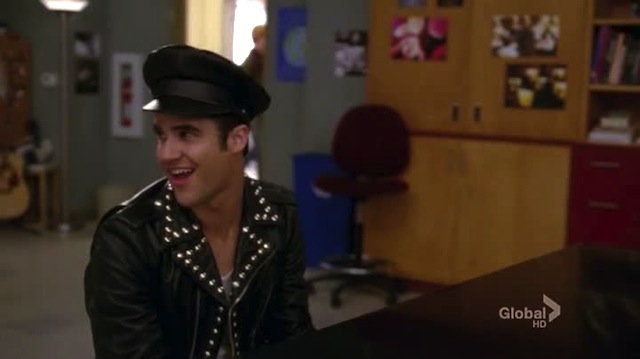 Then Finn & Emma open their mouths and words come out, words about DIVAs. More importantly, Finn’s called in a Special Guest Diva — who could it be? 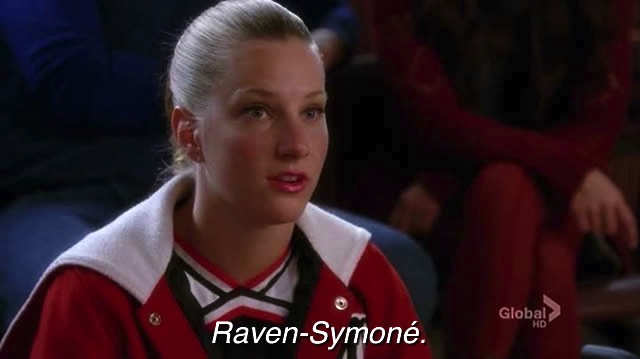 Nope, it’s not Raven-Symone! Also it’s not Celine Dion, FYI. THEN WHO IS IT?