There’s this thing professional sports commentators say that’s code for “we’re here to let you enjoy your gladiator bloodlust without judgement!” It’s called “off-the-field issues” — as in, “despite his ‘off-the-field issues,’ he threw five touchdowns last week” — and it means: you can root for anyone, no matter what horrible non-sports things they’ve done, because they’re part of your team. It’s a zero-sum game, and it’s not just sports fans who do it. It’s TV fandoms and actor fandoms and band fandoms and even political fandoms, which inexplicably exist. Our culture encourages us to enjoy what we love without context, to prioritize our happiness about the big win over interrogating the process that got us the trophy.

With all that in mind, I wondered how comics vets Grace Ellis (Lumberjanes, Moonstruck) and Hannah Templer (Cosmoknights) would handle the whole story of Patricia Highsmith’s life in their new graphic novel, Flung Out of Space, which hit shelves last week. 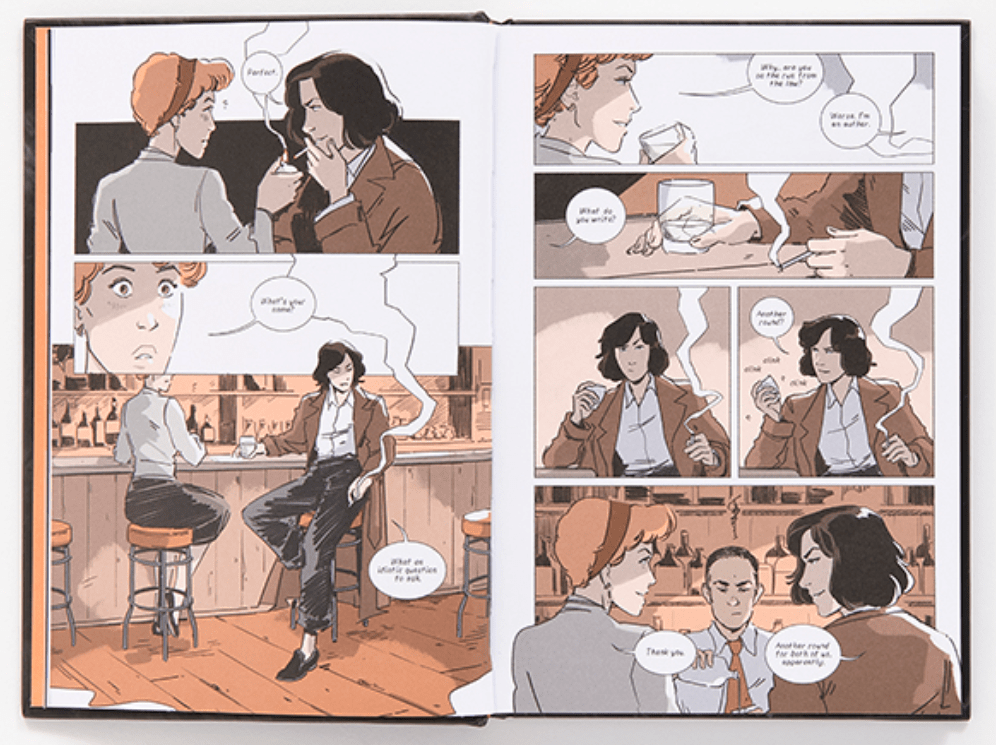 Highsmith is, of course, the author of Strangers on a Train, The Talented Mr. Ripley, and The Price of Salt. That last thing became Carol, one of the most beloved lesbian movies ever made, and these days people even say Highsmith wrote the first gay book with a happy ending. Lots of lesbians even think of Highsmith as Carol Aird, which is to say they think of her as Cate Blanchett, bright as a button and full of faith in humanity. To Grace and Hannah’s enormous credit, they knock Highsmith off that pedestal immediately, and invite readers to witness her struggles as a lesbian writer in the 1940s, while also being clear-eyed about the fact that Pat Highsmith was a pretty terrible person. I don’t mean she was complicated. I don’t mean she had off-the-field issues. I mean she was openly, vilely anti-Semitic, racist, and even bizarrely misogynistic. Grace even ends Flung Out of Space‘s foreword with this: “If you read this book and end up conflicted about Highsmith and her legacy: good.”

Flung Out of Space is an exceptional graphic novel, and a grown-up one too. The pages are full of smoke: clouding frames, wafting into other panels, filling up speech bubbles. They’re also full of Highsmith’s sexy exploits with many, many women. In bars together, in bed together, on top of desks together. Highsmith was a misanthrope. She hated people. What she loved was smoking, drinking, seducing, and dreaming up dark and twisty stories while she was stuck writing comics. She was thwarted at every turn in her pursuit of a serious writing career, and every success she had came in fits and starts as she clawed her way from one kind of notoriety to another. Grace’s dialogue is, as always, full of snap and wit. The story clips along at a train’s pace. And Hannah’s art is all noir, moody and imposing. Their teamwork is on full display in some of the book’s best moments, like when Stan Lee offers Highsmith a job. His speech bubble is airy and full of drawings of caped crusaders. Her speech bubble is a drawings of guns and smoke, all shadows and cynicism. 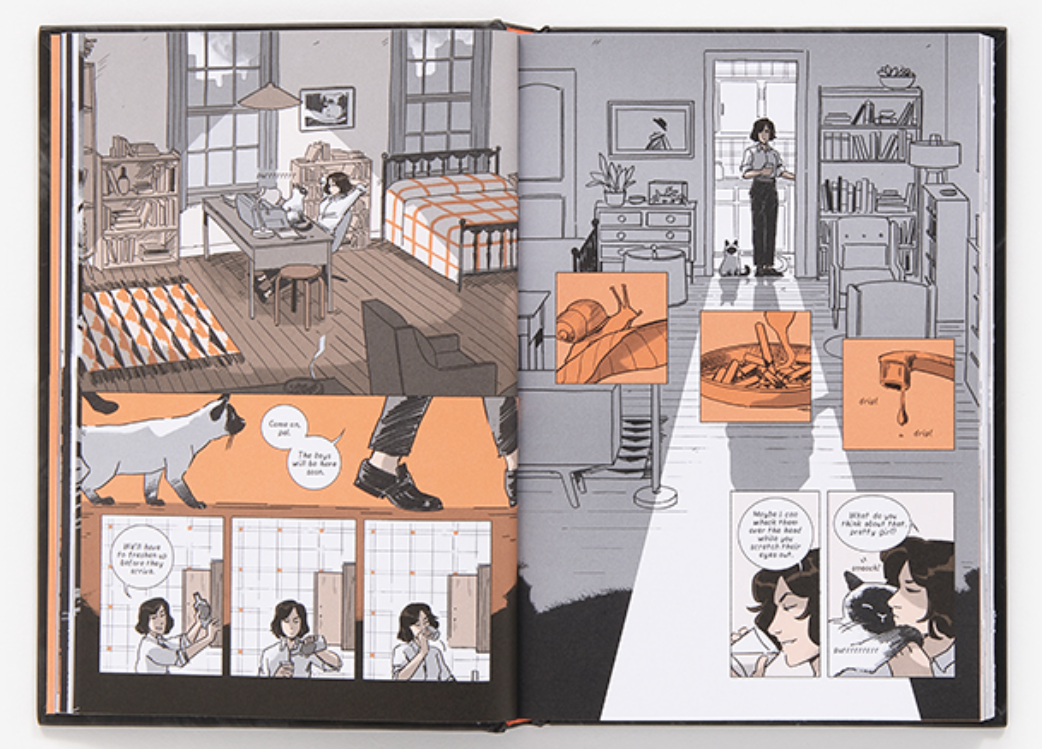 They cover a huge chunk of Highsmith’s life, too, and find an excellent balance between her sexual conquests, her career, and her quest for real love. There’s no couching the homophobia and sexism Highsmith faced as she chaffed against the confines of the ’40s, but Grace refuses to justify Highsmith’s own bigotry by hiding it behind the oppression Highsmith experienced.

Flung Out of Space feels especially relevant right now, with queer folks’ former faves like Ellen and JK Rowling destroying their legacies before our eyes. And it’s welcome addition to the queer graphic novel and lesbian history canon. Like everything Grace Ellis writes, it just leaves me wanting more. As I finished the book and closed the cover, I said out loud, “Patricia Highsmith was the worrrrrst. I wish this was a series!” Maybe next Grace and Hannah could do Eleanor Roosevelt!