Welcome to the first recap of the first season of Faking It, a brand new show from the musical network that brought you I Want a Famous Face and Carmen and Dave: An MTV Love Story.

We open in bed with a lesbian, just like I do every morning. 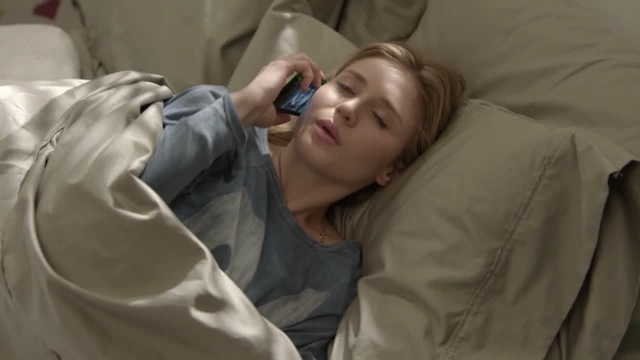 Hello, I’ll have two free-range scrambled eggs, a gallon of kombucha, a ramekin of granola and two bloody marys with extra blood please, thank you. And yes, I woke up like this. 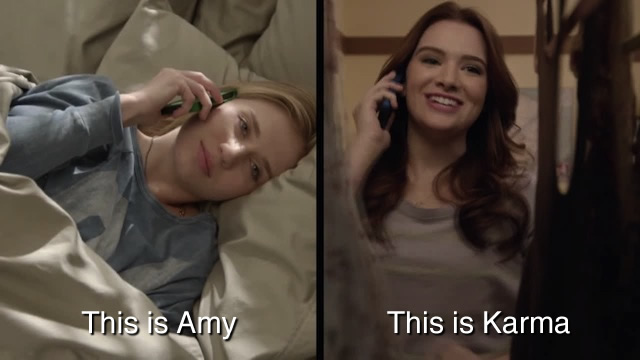 And they just had the best morning cybersex of their lives

The primary bond between Amy and Karma is a shared love of delivering exposition over the telephone. In the span of a two-minute phone call we learn: 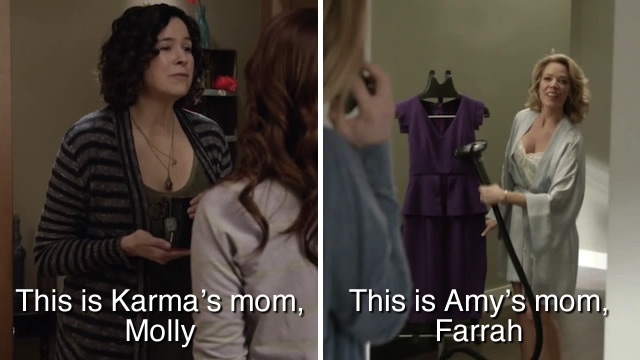 And sometimes at night when the girls have gone to sleep, Molly sneaks over to Farrah’s house to eat Toaster Strudels and watch Orphan Black with their shirts off

Also, Karma’s going to pretend to be blind to improve her social standing, because why anything. Amy asks how she plans to pull off this plan, but alas, Karma’s only capable of delivering additional exposition:

Karma: We live in Austin, a blue oasis in a red sea of Texas.
Amy: Yup, haven’t forgotten.
Karma: And our high school is so tolerant and accepting, the outcasts are the in-crowd!

Cut to said Blue Oasis High School, where Karma’s committed to getting popular by wearing a new Google Glass model inspired by the protective goggles my oral surgeon Dr. Fear made me wear before he sticking pliers down my throat. 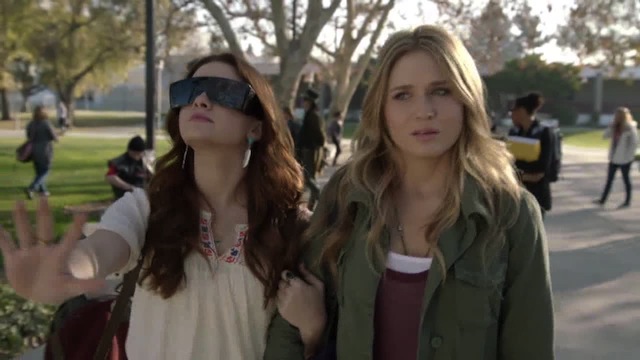 Uh, Karma, my boobs are over here

Karma’s certain that having a brain tumor over her optic nerve is that special something that’ll earn the tricky twosome golden invitations to Shane Harvey’s Super Cool Party. Amy’s skeptical about attending the party at all, noting that “we hate high school during the day, I doubt we’d like it better at night after it’s been drinking.” Amy would rather stay home and watch child slavery documentaries on Netflix. AMEN. Karma insists that if they don’t ascend the social ladder pronto, they’ll become “socially awkward weirdo losers who make their own organic juices and sell them at farmer’s markets.” So basically: lesbians. Sorry, I mean: AWESOME LESBIANS. 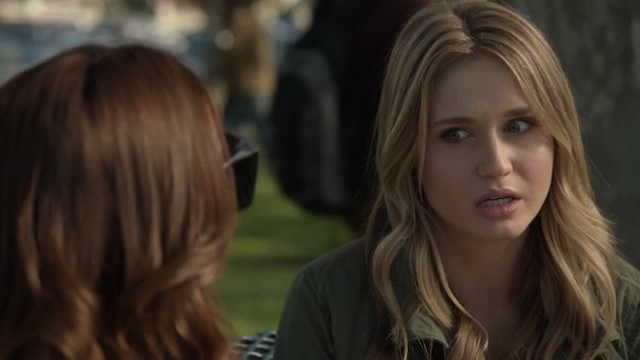 Amy points out that Karma barfs around cute boys and before we can discuss how that might be a sign of latent lesbianism, we’re interrupted by Lauren and her lady sidekicks. 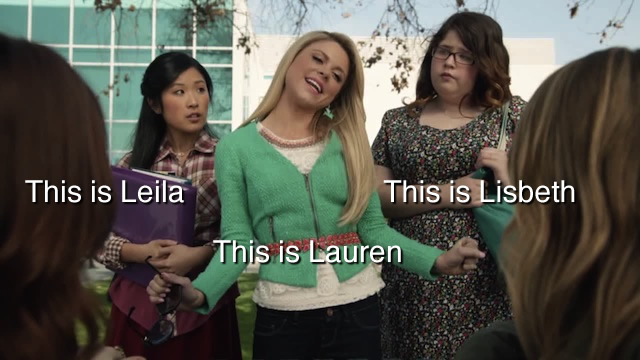 Lauren is Fake Quinn Junior, basically. You know: shops at Talbots Too, has blonde hair, is traditionally attractive in a way that makes me sleepy, feels entitled to everything and is bitchy when she doesn’t get it. Then Lauren and Amy volley some exposition at our necks. We learn: 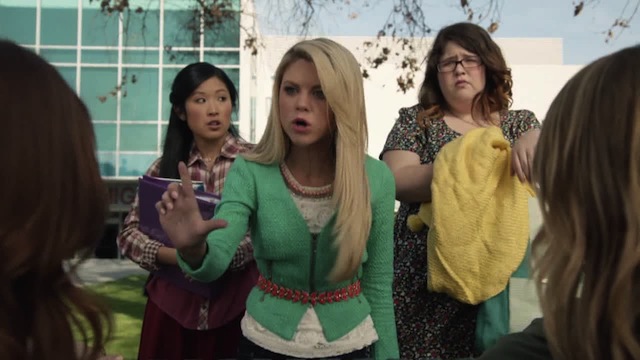 It’s a hand gesture I learned from GLEE, okay? You know, GLEE? Where even though everybody is gay, the blonde girl IS STILL ACTUALLY POPULAR?

Lauren, still angling to get Amy and Karma off her bench, yells “You’ve got five seconds to hop in your canoe and paddle back to the Isle of Lesbos so I can get my Vitamin D!” just as two young lads are strolling past them on the quad.

YUP, THIS IS THE MOMENT.

The Moment When Everything Changes Forever.

Because these two young men would like to know more about The Isle of Lesbos Lauren is speaking of so loudly. Maybe Shane could buy himself a new sweater there: 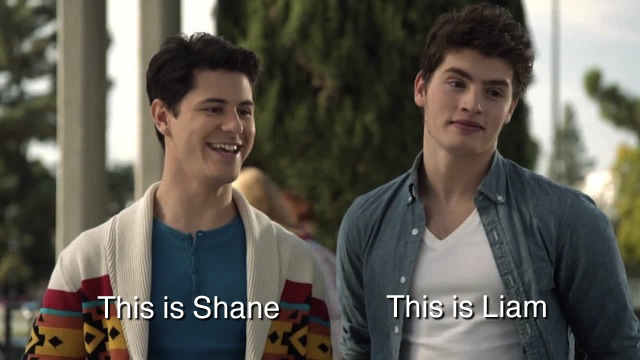 And they prefer organic lubricant

“Bullying the gays, someone reeks of the late ’90s,” says Shane to Lauren, who screams about how she’d be more popular in another part of Texas and recedes offscreen. Shane, who will soon confess that he’s always wanted lesbian friends, invites Amy and Karma to his party! Attractive fashionable gay men LOVE attractive fashionable gay women, it’s true, and it’s all fun and games until they make a demeaning joke about butch lesbians and you have to point out that you wake up next to one every morning. Oh, then Liam introduces himself and Karma throws up. BOYS.

Starsweep to Shane Harvey’s Party Party, where Karma and Amy are sitting on a couch feeling weird. 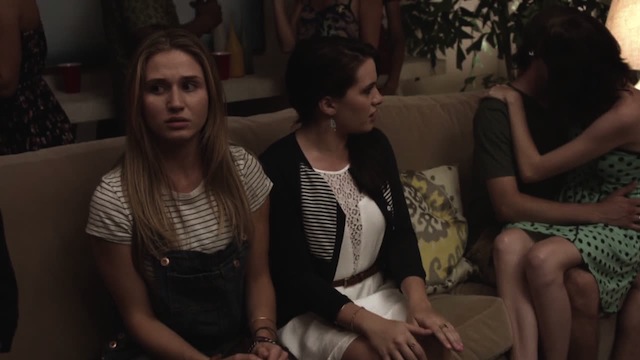 Ok you win, next time we’ll just go to Cheer Up Charlie’s

Meanwhile, Lauren and her sockless boyfriend are chatting it up with Shane and his bestie Ivy. 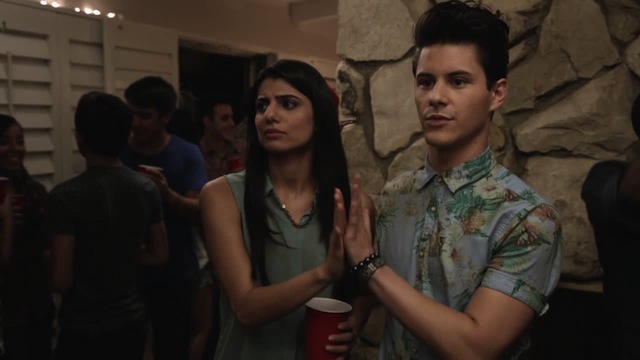 Is this how lesbians have sex

Ivy tells Lauren and her sockless boyfriend to beat it ’cause they weren’t invited and are probs missing a Young Republicans Event somewhere somehow. 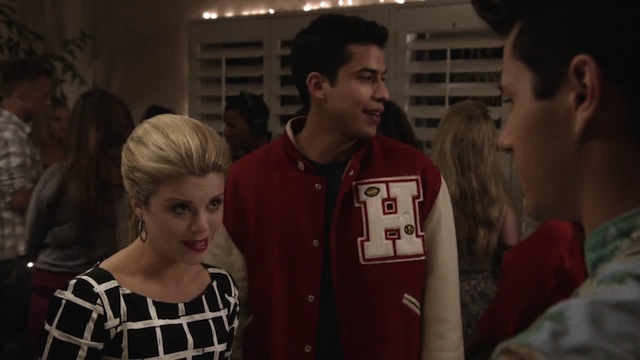 Lauren says it’s important for the frontrunners in The Homecoming King and Queen Contest to make an appearance at social events, but Shane says nobody cares about patriarchal institutions like Homecoming Queen. Then Liam runs into Karma and spills beer all over her dress and then she passes out. 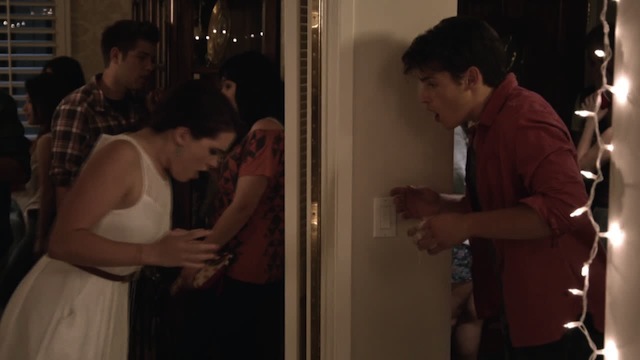 OH MY GOD THERE’S A BABY GREMLIN ON THE CARPET

Shane finds Amy outside in her overalls and asks her who went “under the covers” first, which must be a thing the kids are saying these days because I am an adult who has never heard such a thing. 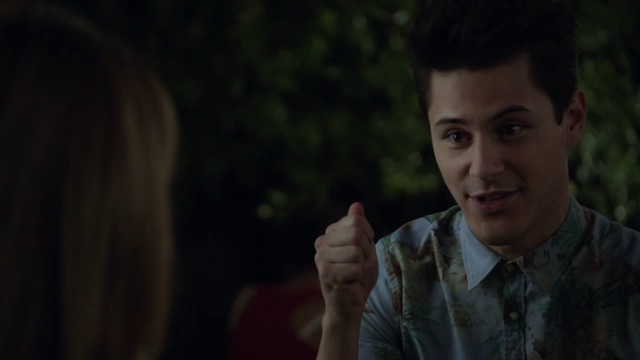 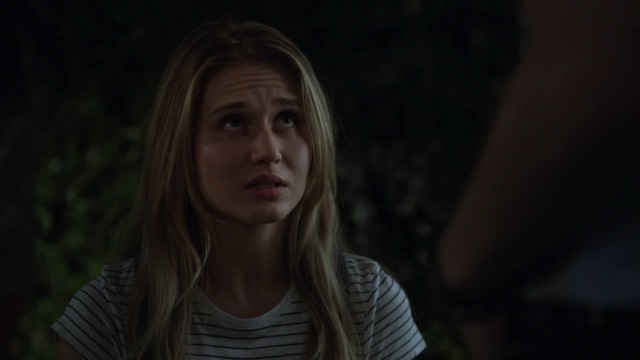 No, that’s how you abort a baby with your thumb

Shane: I won’t blab, gay scout’s honor! I just really want us to be friends. I’ve been craving lesbian energy in my life.
Amy: Look, I’m oddly flattered but I’m not gay.

Shane tells her that it’s totes okay to be gay, and she is like, um neat, okay bye. 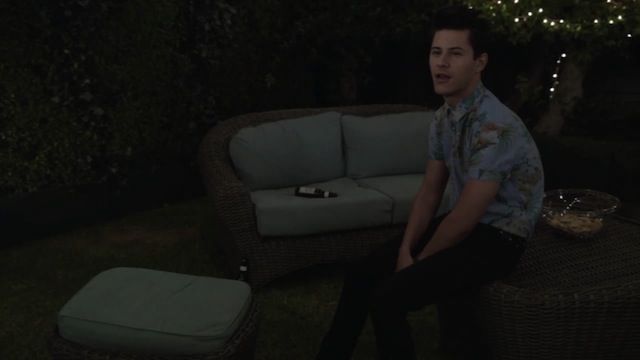 Comeeeonnnn someone must wanna play euchre with me

Back in the party, Liam’s oggling Karma’s now-visible nipples (because of the beer spill) and apologizing for the mishap when a drunk girl in a tight dress crashes onto his lap, calls him Pooh Bear, and is summarily dismissed. Liam explains to Karma that he’s not a douchebag ’cause he tells girls straight-up that he’s not interested in anything serious so then if they have feelings it’s totally not his fault. 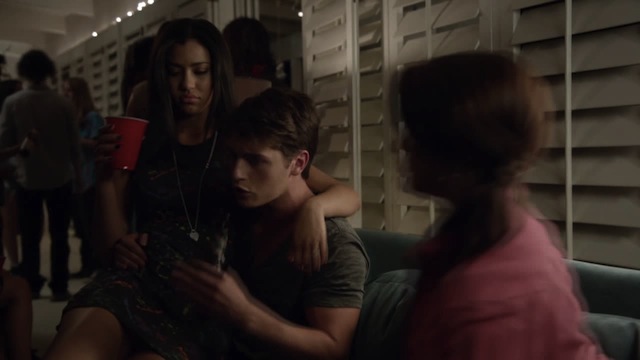 How many times do I have to tell you that I’m totally gay for SHANE?

Karma says something annoying about women raising families, and Liam responds that it’s so great to have a lesbian around but before Karma can correct him, Amy pops in to demand that they bust this pop stand. 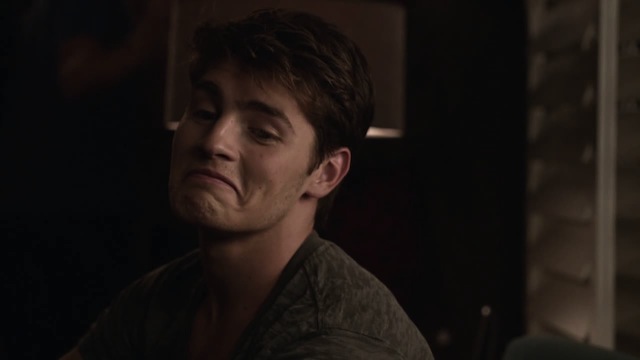 But before the troubling twosome can safely escape the Fiesta, Shane seizes their hands in his and marches them into the center ring of the party and calls this Outing To Order. 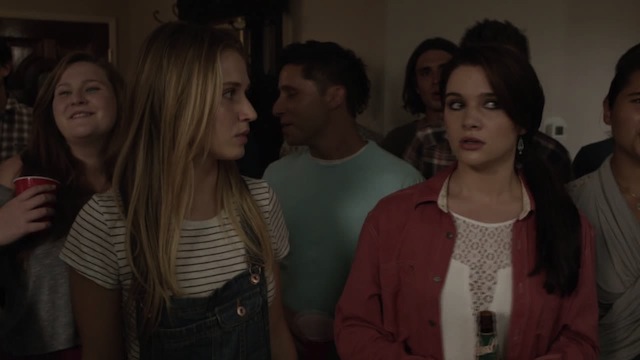 Shane: “Two friends of ours are scared tonight. They’re hiding in this teeny tiny dark little closet afraid to come out, afraid we’ll reject them! Here at Hester High we do things differently. We accept everyone! Can I get an AMEN, Brenda?” [BRENDA GIVES AN AMEN] “How do we prove to them that we’re not your typical high school, that we accept them, that they’re safe. There’s only one way I can think of. Let’s elect them HOMECOMING QUEENS!” 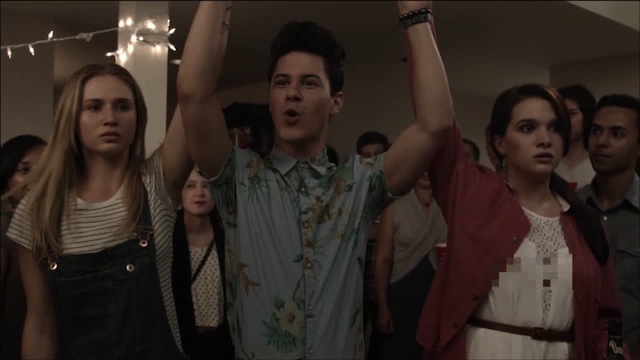 Everybody starts chanting “All hail the queens.”

I think this is your standard-issue TOTAL NIGHTMARE for anybody who is actually in the closet, sidenote. What the fuck, Shane?

The next morning at an underpopulated bus stop, Amy and Karma are discussing the situation: Amy wants to come clean but Karma wants to see how it “plays out” ’cause going gay has already gotten them an invite to a terrible party and straight guys love lesbians and Liam is a straight guy. 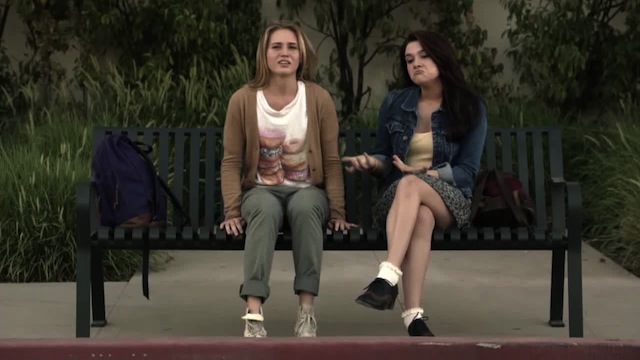 Then they get into a mini-fight about Liam ’cause Amy says he could get anyone in school and she doesn’t want Karma to get hurt and blah blah blah, and then a goth kid gives them muffins. “My Moms and I baked them for you two. They’re gluten-free,” he says. “You got my vote!” 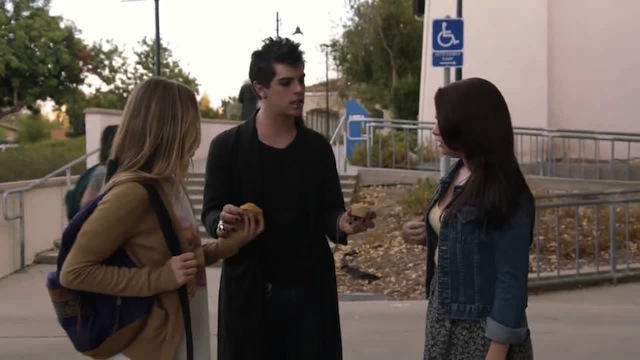 Also there’s poison in them

Karma: Maybe I wanna get hurt. Maybe I wanna feel something other than boredom.
Amy: I’m sorry if spending time with me is so boring!

Now that they’re fighting in public, everybody is totally sold on the lesbian thing. Then the chick who banged Artie on Glee last week interrupts their lez-squab to schedule a photo shoot, which’s when Amy and Karma notice that the school’s been decked out in Karma and Amy swag. 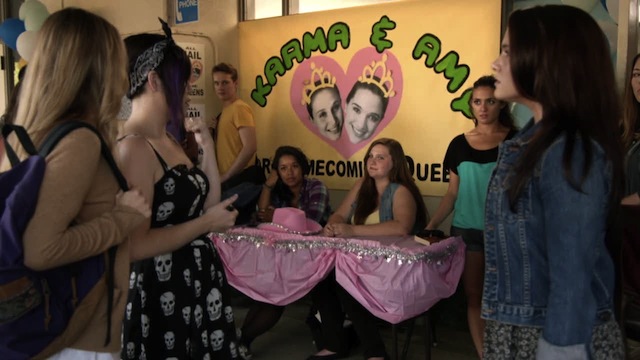 Hello girl in the flannel

Lauren’s going crazy ripping signs down as fast as Liam and Shane can hang them up.

Liam: Anyone think the lipstick one is kinda sexy?
Shane: Typical male. Trying to prove virility by turning a lesbian straight. 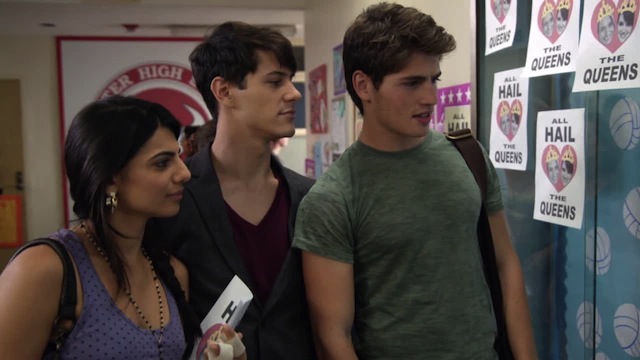 I think we made the right choice by springing for Photoshop Elements, y’all

Outside, Karma is delivering lesbian spirit vibes to an unborn fetus when Amy shows up to once again plea that they shut it down. 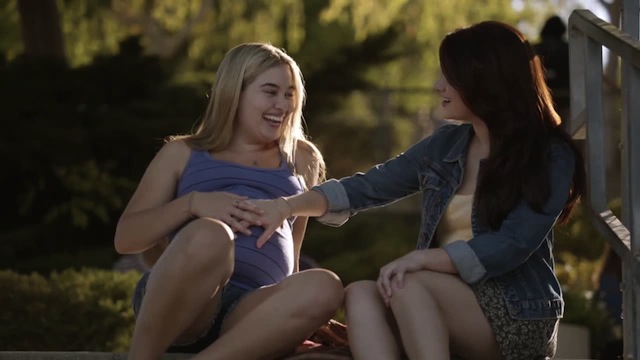 Karma convinces Amy to maintain ’cause now everybody knows who they are, which’s the only thing in the whole world that matters. “I have been getting a lot of free baked goods,” Amy notes. Plus, Karma’s supes excited for the photo shoot and has even bought fake eyelashes. “I guess that makes me the butch one,” says Amy. “Good! We’re agreed!” says Karma before dashing off to apply the lashes. 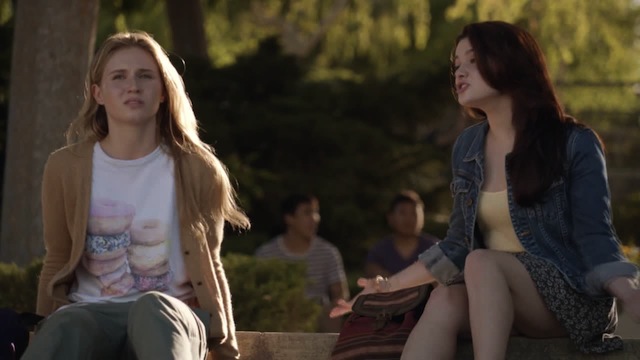 At yet another key moment of this sunny spring day, Liam is making terrible art outside and ruining nature. 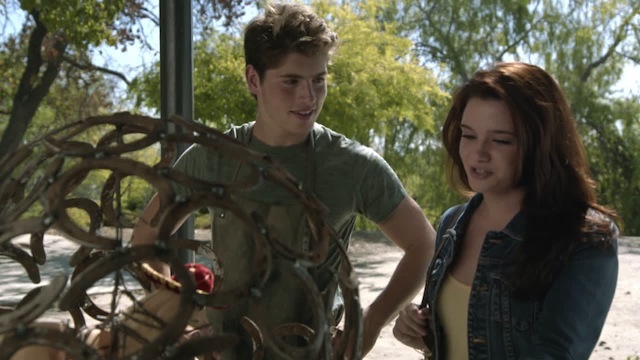 You know this reminds me of a really moving piece of art created by Jodi Lerner? Are you familiar with her work?

Karma flirts with Liam about the symbolism inherent in the toy donkey he’s hung up inside a brass orb of male tears. Meanwhile, Amy’s trying to hunt her down, Ivy the photographer in tow, noting “Karma would be late for her own funeral. It drives me bonkers, but I love her.” See this is what’s so neat about their plan is that best friendship in high school is often nearly indistinguishable from girlfriendship. BUT just as Karma and Ivy round the corner… 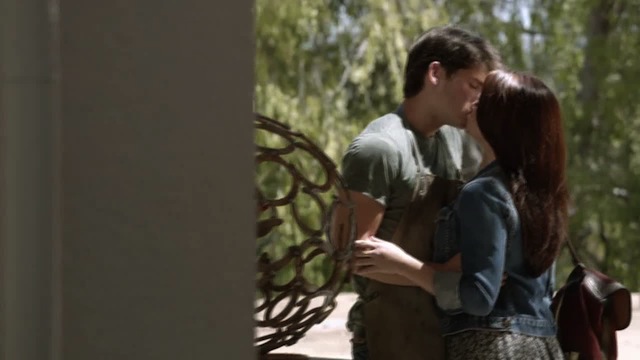 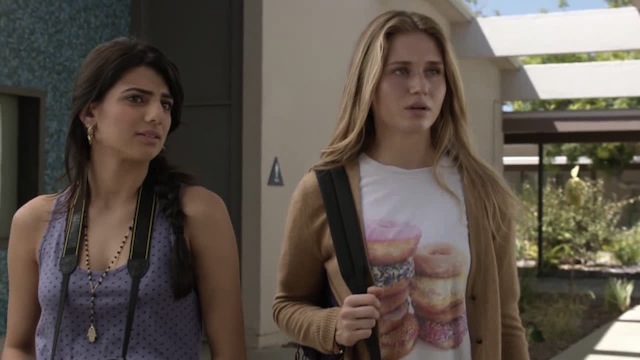 She knows you can see her, right?