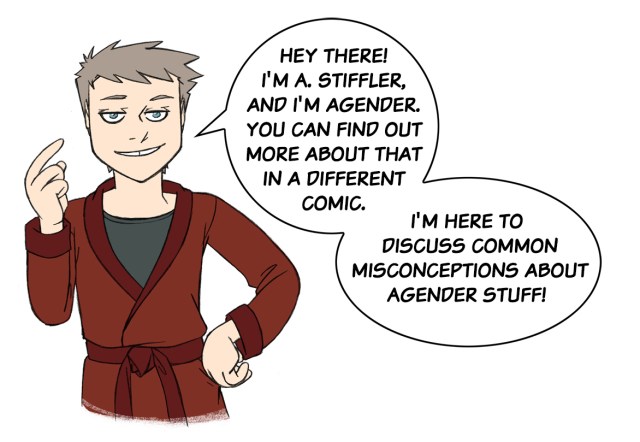 This will be familiar territory for many of you (and that’s great!), but for anyone who isn’t as well-versed, let the learning begin!

Gender, while often used as a synonym for biological sex, is an entirely separate component of every human’s makeup. Even the scientific and medical communities recognize the differences between “sex” and “gender.” To quote the World Health Organization:

“Agender” by definition means “someone without gender,” and falls under the big, colorful trans umbrella. Just like someone might identify themselves as a man, a woman, genderfluid, and so on, a person who identifies as agender doesn’t feel as if they belong anywhere on the gender spectrum at all. While the identity is easily summed up in a sentence or two (see above), the concept is where most people seem to get lost. So, here’s a handy guide to the most common assumptions, faux pas, and outright weird notions about people who are agender that pop up in everyday conversation.

1. Agender Does Not Mean Asexual

One of top mistakes I see on a daily basis is the presumption that an agender person must also be asexual. I mean, they sound a lot alike, right? That must mean they’re connected! Wrong. We’re people with the same complex set of desires and attractions as anyone else, not a Sesame Street letter-association game. Other than beginning with the letter “a,” those two descriptors have no more likelihood of being directly linked than any sexuality with any gender. Likewise, you can’t simply interchange the words with one another. Unless we are talking about who I may or may not want to take to bed, “asexual” can sit this conversation out. 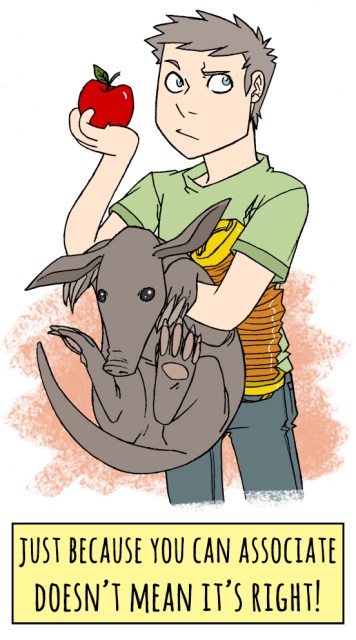 2. No, I Don’t Have The Decoder Ring To Gender

So often, agender people like myself are interrogated at length to define all of the ins and outs of gender, since we obviously must know what defines gender in its entirety, since we’re not part of it. The problem is, it just doesn’t work that way. Gender, even a lack thereof, is too nebulous of a concept to pin down absolutely in a way that fits everyone. Biology, societal roles, cultures, and theories are just too varied, and how much each impacts an individual’s identity is different for everyone. Why does anyone identify as the gender they do? I’d have an easier time explaining the basics of quantum physics than telling you why you’re a man, why that person is a woman, and why I’m neither of those things. I mean, I totally sympathize with Heisenberg; he could never tell you anything for certain, either! (I’ll see myself out.) 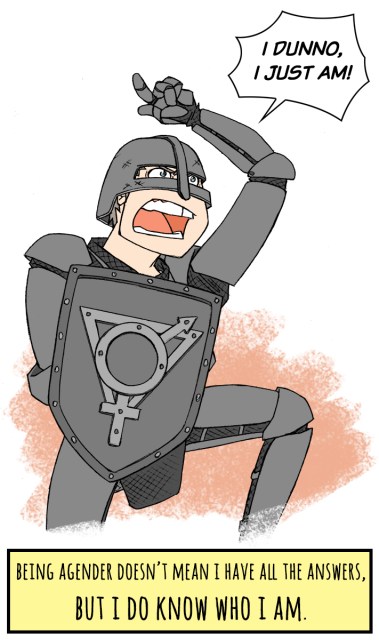 3. My Identity Does Not Invalidate Yours

Kind of like that last point, agender people and their identities are no more controversial or world-changing than your own. We’re not a race of super enlightened gender-Buddhas that have achieved a higher level of existence beyond mere mortals, and we don’t claim to be. Nobody’s gender has suddenly become obsolete in the presence of my awe-inspiring, counterculture war cry of, “I dunno, I just am.” Agender people are just trying to live their lives being who and what they are, just like anyone else. No one is trying to convert anyone in or out of any identity, or destroy the notion of genders for everyone, though I’m sure the theoretical pamphlets would be entertaining and bizarre as hell. It’s okay.

See how I lumped all of those together? Because they are equally stupid assumptions. Unless you are describing an agendered person who can’t figure out a Portal level, they’re not confused. Genderfluid is a totally separate identity. “In denial” accurately describes the person who would say that of agender people. To say we care too much about gender roles is what you might call an informal fallacy; by not being any gender, it’s kind of impossible to embrace or avoid any of the roles typically ascribed to one. And as for any non-binary genders being nonexistent or “not real”? Well, simply put, we are real because we, y’know, exist. That argument is automatically invalidated by our mere presence. However, if you want specific, recorded examples, maybe you should brush up on a little human history. There have been non-binary genders throughout human civilization and all around the world — from the calabai and calalai of Indonesia; the two-spirit gender of Native Americans; the fa’afafine of Samoa; the Albanian Sworn Virgins; hijras of South Asia; et cetera. All of these cultures and identities are unique, and not necessarily comparable to the Western experience or understanding of nonbinary gender, but they’re a compelling argument put down your pink and blue baby clothes and back away. 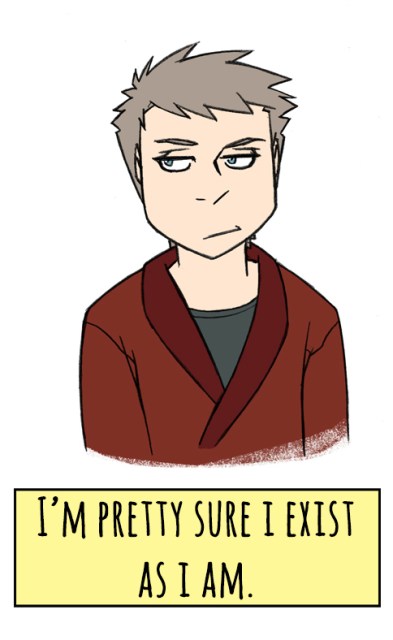 5. You Don’t Have a Word For Me, So You’re Just Going to Ignore My Identity

Oh, the pronoun debate. It’s fine to be puzzled as to how you address your agender acquaintance. The English language, like all West Germanic and Romance languages, simply doesn’t have many ungendered pronouns at its disposal. Luckily, there are plenty of other languages in the world with gender-neutral pronouns and genderless structures: Japanese, Finnish, Hungarian, Persian, Mandarin, Korean, Turkish, Malay, and many more are perfect examples of this. While a lot of English-speaking agender people prefer to use ze/zey/zir/hir/etc., or they/them/their etc., others are okay with the old standbys, especially if they get changed up here and there in conversation. It’s polite, not embarrassing, to simply ask your agender pal which camp they fall in. And please, don’t just tell them, “this is how I’m going to refer to you despite whatever you think,” because then your agender acquaintance gets to refer to you entirely in the third-person for the remainder of their conversation with or about you, too, and your new name will be “fart-face.” It’s only fair.

In conclusion, agender people simply aren’t different, wiser, pickier, newer, or more special than anyone else you might meet. We came by our gender identity the same way anyone does, unconsciously, but certainly. While I can appreciate that agender people are few and far between, and are therefore bound to field questions about their identities, please keep the above points in mind before asking any yourself. As for me, whenever someone asks why I’m agender, I’ll hold my head high, throw my shoulders back, and proudly proclaim, “I dunno, I just am.” 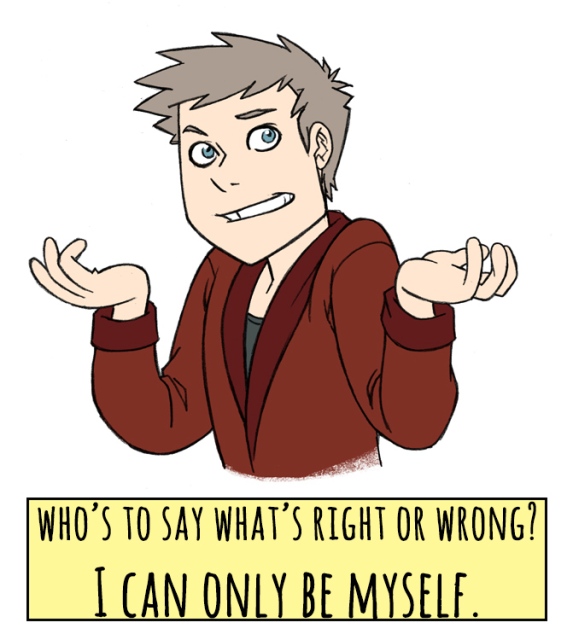 You can see my comic about being agender here.

I also do other funny comics on that site.

And I’m the illustrator and collaborator of the ongoing graphic novel FindChaos (mature readers only), Lesbians 101, and several short story comics!

A. Stiffler is a freelance graphic artist specializing in digital creations, mixed media and comic illustration. They reside in Columbus, Ohio with wife and frequent collaborator K. Copeland. Together they create the ongoing comics FindChaos & ChaosLife. Stiffler also co-wrote and illustrated Lesbians 101, an educationally inclusive web-to-print comic about lesbian (and other) sexualities. Their works have been featured on Australian Broadcasting Corporation productions, The Discovery Channel Blog, The Washington Post, MSN, Gizmodo and NerdApproved among many other online and print venues. Stiffler is a strong advocate for same-sex marriage, LGBTQI/GSM rights, environmental issues, mental illness awareness and preserving the arts. You can support Stiffler by contributing to their new Patreon campaign or by visiting their sites! And you can see their original post about their Agender Identity here!

A. has written 1 article for us.