Finding out about Sarah Graley has really been a godsend for me. She has not just one, not just two great webcomics, but three that I’ve read all the way through in the last few days and completely loved. She writes about a queer witch of color on a quest for cheese substitute and love in Pizza Witch. Then there’s the lazy warrior for hire and her friend who can turn into five cats, on a quest for rent money in RentQuest. And finally, you’ve got the hilarious and oftentimes very twee comics about her personal life over at Our Super Adventure. All of these comics are great, all of them are about women, all of them have the same impish sense of humor and adventure and perhaps most importantly, all of them are full of cats. 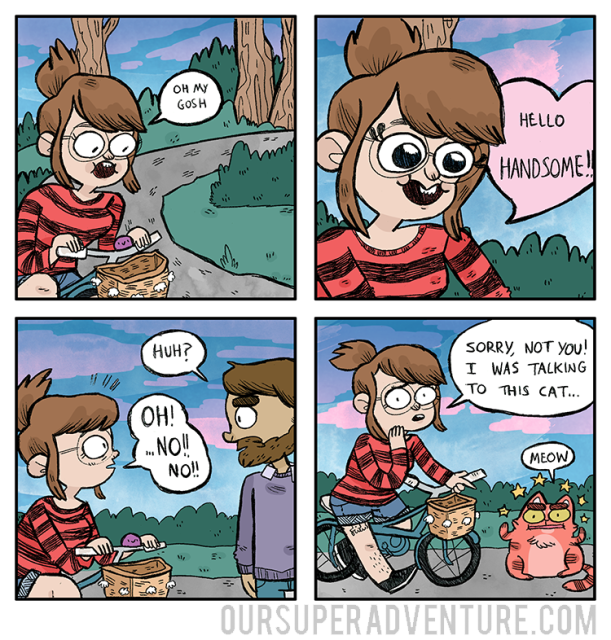 From Our Super Adventure by Sarah Graley.

Her first comic, RentQuest, has ended, but it sure was a fun little ride. It’s about two roommates, Poppy and Noah. Poppy is a freelance warrior with a cute haircut and hairy legs. She’s not super motivated, not super great at being a warrior and not careful enough when she decides to go off on a quest to the appropriately named Ghoul Region. Noah is her roommate who can turn into five cats, but needs to have all five back together to turn back into a full human. He seems to have his life a little more together than Poppy, but, on account of him being not just one cat, but five, he’s also got a pretty bad attitude a lot of the time. If you’re looking for an exciting fantasy adventure comic with a fun punk sensibility, you’ve definitely come to the right place. 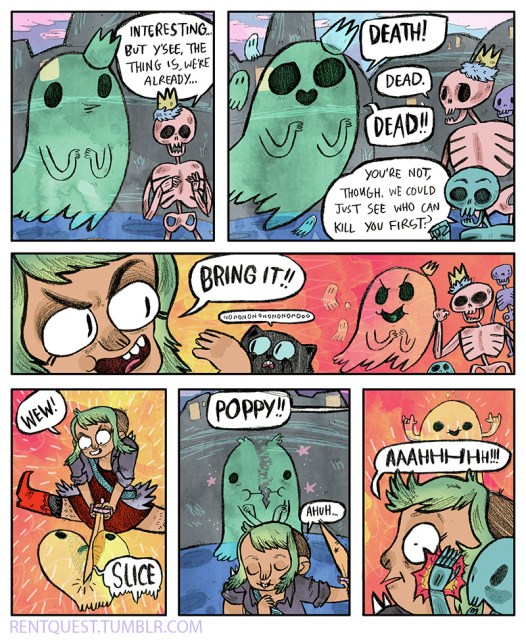 Pizza Witch was actually the first of Graley’s webcomics that I found, thanks to a post on io9. It’s also my favorite, shocking no one at all. Pizza Witch‘s titular pizza witch, Roxy, is exactly my kind of hero. She’s funny, she’s brash, she’s a talented chef, she’s queer, she’s a witch and she’s stylish. At the beginning of the comic we see Roxy and her black cat familiar George delivering a deliciously cheesy pizza to a nearby house. When she rings the doorbell, the person who answers isn’t the person who ordered, but instead a cute girl with silver hair. Roxy’s hoping she’ll eat the pizza she made and fall in love so that they can date and kiss, but unfortunately for Roxy, the silver-haired gal is lactose intolerant. That’s not going to stop Roxy, though. She’s determined to find a cheese-less pizza recipe and win this girl’s heart. How clever of a premise is that? I love it! It’s on a little bit of a break right now, so it’s the perfect time to read and catch up!

There’s more to the story, though. Roxy’s Pizza Delivery Service has a 30 minutes or less guarantee, so not only does she have to make and deliver the pizza that fast, but she also has to go to the top of the mountain, get the cheese substitute ingredient that’s guarded by a monster and come back. That’s a pretty heavy order to accomplish in under half an hour. And honestly, if Roxy weren’t the hero of her story, based on what we’ve seen of her personality and skill set, I don’t know if I’d really trust that she could do it. That’s what makes it so great though! 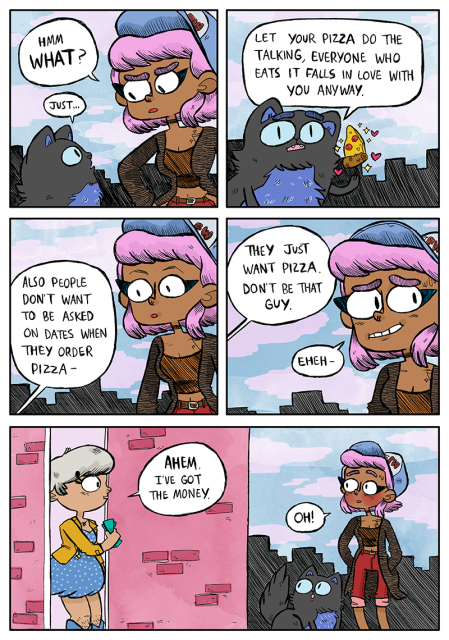 Graley’s female protagonists have a charm similar to a lot of my other favorite webcomic heroines. They’re definitely more than a little rough around the edges in a way that seems like a not-as-dark version of Noelle Stevenson’s Nimona, and they have the same sort of endearing gluttony and sloth that makes Madéleine Flores’ Help Us! Great Warrior so great. They’re also all pretty self-centered, but again, in an endearing way. The reason they’re the heroes of their stories isn’t because they’re The Chosen One — they’re heroes because they want something for themselves and there’s no one else around to do it for them. These characteristics make Roxy, the Pizza Witch and Poppy, the freelance warrior, so much more fun to follow. If they were more restrained or polite, or even just more traditionally motivated, they wouldn’t be nearly as complex.

Graley also has a series of autobio comics called Our Super Adventure that have been running since early 2013, often dealing with her cats, her love of food and her desire to touch her boyfriend’s butt (along with a healthy amount of fart and poop jokes). If you want to support her work, she has comics and pins and a bunch of other great stuff available in her online store. She also has a Kickstarter going on right now for the latest volume of Our Super Adventure that ends tomorrow morning, so if you want to contribute, you’d better hurry up! 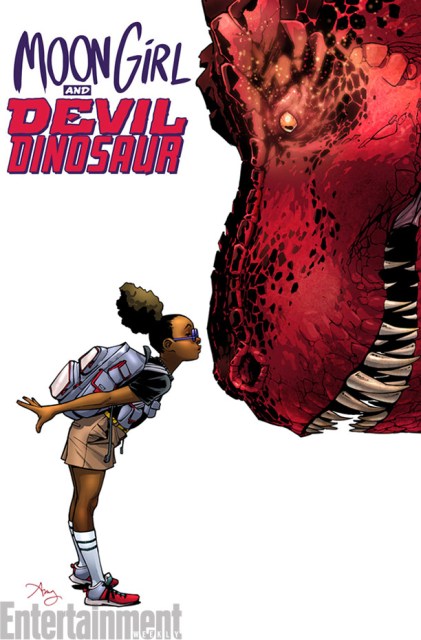 In other news that seems really awesome, have you heard about the recently announced upcoming comic book from Marvel, Moon Girl and Devil Dinosaur? It follows the adventures of a ten year old Black girl genius and her red T-Rex. It’s being co-written by Amy Reeder and Brandon Montclare and will feature art by Natacha Bustos, who is part Afro-Brazallian and Chilean. Moon Girl joins the recently announced relaunched Blade title that will feature a 16-year-old-girl named Fallon Grey as it’s titular character, as new Marvel titles featuring young Black female protagonists. How great is that? Still, though, as Witchy creator Ariel Ries said on Twitter, “marvel Cool that you’ve made your new superhero a young black girl but… where the black writers at”.