You know that feeling when you find a new passion in life? Like a new book or movie or style of fashion or music that just blows your mind and it’s like the creator was just reading your mind? Like they created exactly the thing you had always been waiting for? Like how a bunch of us (me included) felt about Lumberjanes? That’s how I feel about the webcomic Witchy. I mentioned Witchy in my list of queer and trans women comic makers you can support, but I want to give more attention to it. Ariel Ries has created a webcomic with an amazingly original set of rules for magic and some really wonderful world building. She’s created a webcomic filled with witches of color. I mean, if you know me, you know that one of my main aesthetics is Femme Witch Coven, so this is right up my freaking alley. Basically, this is my new favorite webcomic. 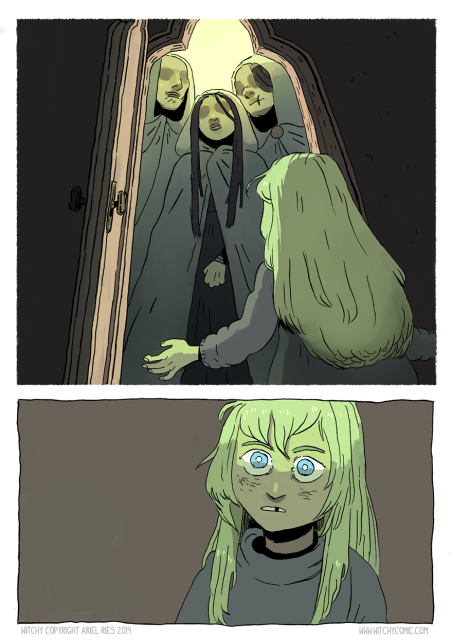 The premise is that in the Witch Kingdom Hyalin (where Witchy takes place), a witch’s power comes from how long their hair is, and as soon as a witch’s hair becomes too long, and they are seen as an enemy of the state and are burned by the Witch Guard. This happened to the father of our protagonist, a young witch named Nyneve, at the beginning of the comic. In the present day, Nyneve is a student at the witch school, where she hangs out with other witches like Batu and Prill. Well, maybe “hang out” is too strong a word, she’s pretty withdrawn and therefore doesn’t seem to have a lot of friends. But she has a good reason for withdrawing so much. 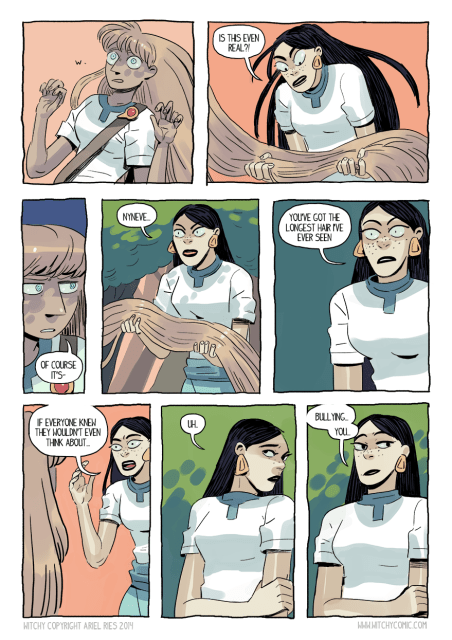 It’s almost Conscription time, which means that all the witches will be judged on the length of their hair, their aptitude at magic and their potential for joining the Witch Guard. Sensibly, Nyneve is worried about this. She has a bad history with the Witch Guard and a secret she needs to keep. Plus, she seems to have a problem with magic that she doesn’t know the cause of. It’s a stressful time all around for Nyneve.

Ries says that she imagines the world of Witchy as a “sort of Asian melting pot kingdom” with Nyneve being Afghan/Indian, Prill being Chinese with some Southeast Asian ancestry and Batu being Mongolian and Tibetan. So we have this whole cast of Asian witches, how great is that? The character and world design of all of this is just so wonderful. I just want to immerse myself in this world that Ries has created. I really love the way all of these characters look and the art is really beautiful and adds to the magical feel of the thing. 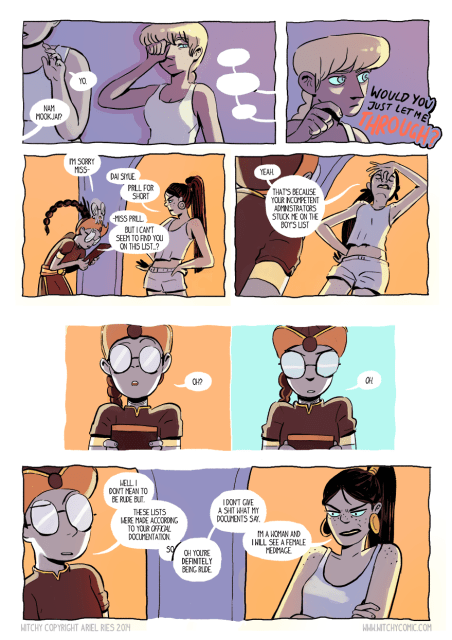 Now, for a moment I’m going to talk about Prill, who’s one of the girl witches in Nyneve’s class. At first she’s kind of a bully towards Nyneve, but when she finds out her secret, she starts to become an ally. She’s also a trans girl. Y’all don’t understand how much I’ve needed a character like Prill my entire life. Seriously, I don’t think you understand. Has there ever been a better character than this bossy, snarky trans witch of color who doesn’t let anyone walk all over her or treat her with even a teaspoon less than the respect she demands but is also a great friend? In Ries’ sketches she sings “Kiss from a Rose” karaoke, steals her mom’s earrings and says that she could see herself dating a girl (Nyneve to be exact), she has great hair and black lipstick, she shows that despite all of her sass she has a giant soft heart and to top it all off, Ries imagines that she has a tumblr filled with Nicki Minaj. And she does all of this with unsupportive parents. She and Nyneve bond over their shared reluctance to deal with the medimages, and despite having to deal with very rude and uninformed people, she doesn’t want Nyneve to compromise on her feelings about the Witch Guard. I could read a thousand pages of just Prill and Nyneve hanging out and being friends. Like, Prill is pretty much everything I’ve ever wanted in a character. Prill is my queen. So thank you, Ariel Ries, for creating such a freaking brilliant wonderful amazing genius character. 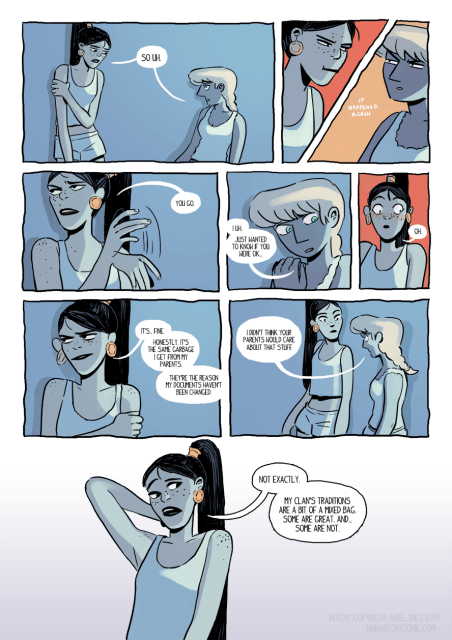 The thing is, Prill isn’t even the only great part about the comic (but if she was I would still love reading it). The entire cast is amazing, starting with Nyneve herself. She’s brave and full of heart, and she you can tell that she feels her emotions like, a hundred and twenty percent. She also has the longest hair Prill says she’s ever seen. But she knows what happens to people like her; I mean, just look at her dad. So she uses a glamour to braid her hair up and hide its length. Batu is kind and understanding and a giant of a teenage boy. Even the witch teacher who starts off being mean and overbearing is pretty awesome. And the story is super compelling, I can’t wait to see what happens when more people find out about Nyneve’s hair.

This comic seriously is Everything. It’s about girls of color, it has queer characters (including a trans girl of color), it has witches, it’s got a super original premise, it’s got great art, great writing and a greatly compelling story. I can’t wait to read this comic every week. It’s also definitely worth it to follow Ries on tumblr and see her sketches and side art there. She also has a twitter, a gumroad and society6 store (although there sadly isn’t any Prill merch yet) and a Patreon (which I proudly support) where you can support her. I really, really, really want everyone to read this comic, it’s incredible.