Personally, I’ve always been more of a werewolf gal than a vampire girl, but as soon as I saw Madeline McGrane’s wonderful comics I started rethinking my position. McGrane doesn’t necessarily romanticize vampires — she draws them as pale, with strange eyes and lives full of isolation and hunger — but still, she writes them in such a way that you can’t help but root for them and think that they’re at once enthralling, endearing and a little bit adorable, like a drag king dancing to a Justin Bieber song. You can’t help watching and smiling and maybe blushing a little more than you’d like to be.

Not only does McGrane have a great knack at telling stories about vampires, but she’s also so freaking amazing at crafting the world they live in. She’s a master of the Western genre. There’s something strange and wild and raw that flows through the air and the land in the Western US, and McGrane understands that and knows how to get it onto the page. Because of this energy, Paranormal and Western are two genres that go great together, and when you add lesbians, it all becomes so, so much better. It honestly might be my favorite triple combination of genres. While most of her comics have a very punk kind of fun, they can sometimes get very dark and intense, especially when dealing with vampires. She’s not afraid to let loose and really go for the jugular, just like a real vampire would. Perhaps life is imitating art? 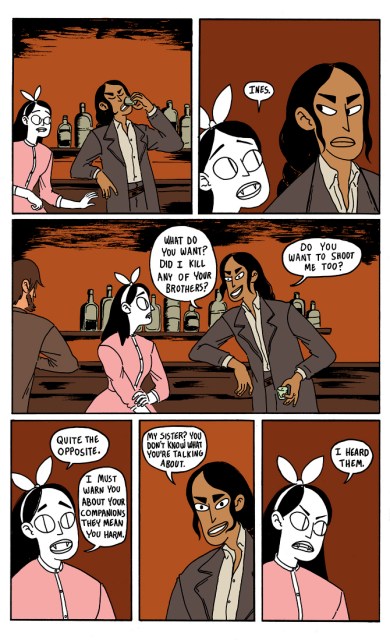 From Dirt Creek Runs With Blood.

Her standout comic is Dirt Creek Runs With Blood, which is, unsurprisingly, a lesbian vampire western. Just saying those three words — lesbian vampire western — makes me excited for this comic all over again. It tells the story of a vampire woman who gets bored of draining victims in the big cities of the East, so she takes a train and a stagecoach and travels to the wild west for some adventure. What she finds there is a gang of cattle rustlers, including one woman, Ines, who catches her eye. After this, it becomes a tale of a sibling rivalry, revenge, looking for a partner in a lonely world and adapting to your surroundings. 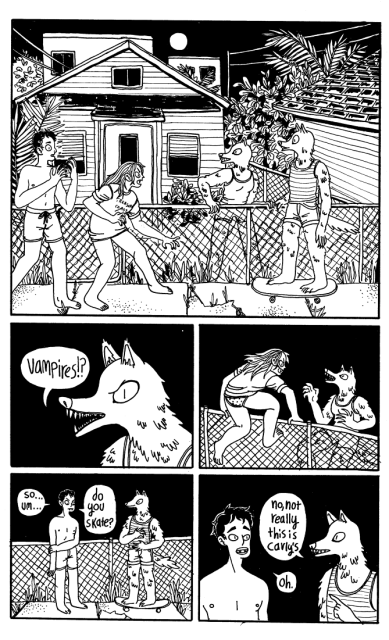 Another one of my favorites is her most recent comic, Vampire Beach 2, which is based on one of her older comics. This one takes place in what I think is Florida, but it has the same emptiness and almost dystopian feel that her Westerns, and many other Westerns, have. She uses heavy blacks to fill in the world around her characters that make you feel like the world is close to drowning them, the air feels thick and heavy, and these characters are moving through it as best they can. This is also a modern-set tale, but again, there are duels and star crossed lovers and lonely creatures wandering through life trying to find a companion. Classic themes that she’s great at writing and illustrating. 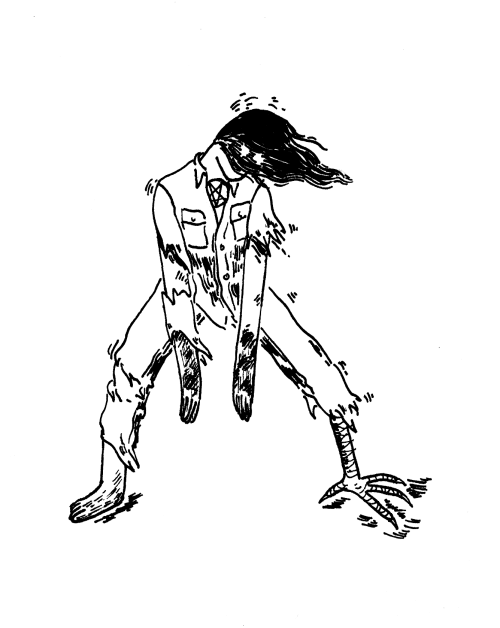 Check out this fucking badass witchsona.

McGrane’s comics have a really nice edge to them, but it’s not the kind that male comic creators are trying to shove down our throats today. It’s a homemade edge, one that comes from being the type of kid who wore a cape to middle school or would walk two miles just to go watch anime in your friend’s basement. She’s also responsible for one of the most badass witchsonas to come out this year. Mcgrane grew up in Wisconsin and now goes to the Minneapolis College of Art and Design, so I don’t really know how she’s able to perfectly capture the spirit of the West (I say this as a person from Southeastern Idaho who spends a lot of time in Utah and California). She’s just that good, I guess. You can support her by offering her freelance opportunities and, according to her website, by talking to her about “vampire conspiracy theories.” You can also buy Dirt Creek Runs With Blood, the great vampire Western, from her online shop and follow her on tumblr and twitter.

Over the Garden Wall #5