Last Friday night was really, truly a great night for comics. That night was the night that the 27th Annual Will Eisner Comic Industry Award winners were announced and the trophies were awarded at a ceremony in San Diego at Comic-con. And so many great comics won! I think this is genuinely the first time I’ve seen the list of winners from a major award and not just been not-disappointed, but been genuinely happy. Let’s have three cheers for women, queer and otherwise, in comics!

Okay, first we need to talk about the awards that made me happiest, which if you read this website, I don’t think you’ll be at all surprised to find out have to do with Lumberjanes. Lumberjanes is honestly the best, you guys. If you’re not reading it right now, please, I’m begging you, you need to start. It’s fun and funny and exciting and well written and it has great art and really, really great characters and is diverse and unlike anything else in mainstream comics today. Anyway, back to the actual news. The first award that Lumberjanes was up for was Best Publication for Teens (ages 13-17), which was also the fist award that they won. Yay! Congratulations to Shannon Watters, Noelle Stevenson, Brooke A. Allen and our very own Grace Ellis!

The book was also nominated in the category Best New Series, which many saw as the most difficult category of the night. They were up against The Fade Out by Ed Brubaker and Sean Phillips, Skottie Young’s Rocket Raccoon book from Marvel, and two titles I’ve talked about multiple times here at Drawn to Comics, Ms. Marvel and The Wicked and the Divine. Once again, Lumberjanes took home the prize.

The awards for Drawn to Comics favorites didn’t end there. Emily Carroll also took home two prizes, one (Best Short Story) for her delightfully beautiful and creepy online short “When Darkness Presses” and another (Best Graphic Album — Reprint) for her wonderful book of fables, Through the Woods. Carroll is one of my favorite writers and artists and she definitely deserves any and all awards that she gets. Jillian Tamaki, who I’m constantly praising, along with her cousin Mariko Tamaki, won Best Graphic Album — New for their book This One Summer. Another favorite, Fiona Staples, won Best Penciller/Inker for her art on Saga, which also very, very deservedly won the big award, Best Continuing Series. I was also really happy to see that Raina Telgemeier won for best Writer/Artist for her work on Sisters. I’m embarrassed to say that I haven’t read any of her work yet, but have recently bought some to check it out, thanks to Kate Leth’s recommendation. 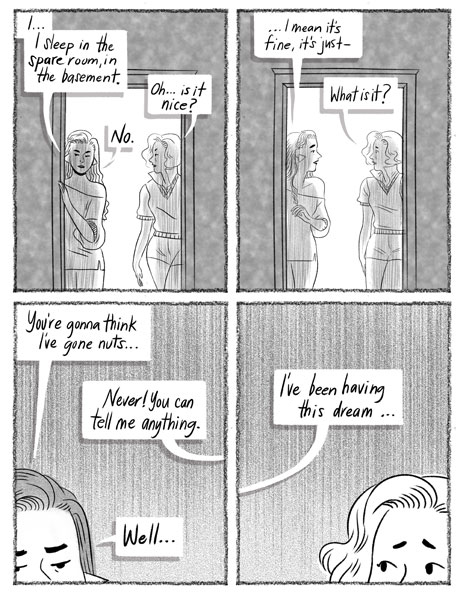 From “When the Darkness Presses” by Emily Carroll.

These books winning Eisners isn’t just exciting because I’m a fan of them, or we’re fans of them, it’s important because it’s showing that in a medium where women are so often told that we’re fake fans, or that books by us and about us don’t sell or even just aren’t good, women really came out on top. Not only that, but a lot of books by and for queer women came out on top. So many of the big awards, Best Writer/Artist, Best New Series, both of the Best Graphic Album categories, Best Penciller/Inker and half of Best Continuing Series, all went to women. Basically, women came to the 2015 Eisners and took over. They dominated. They changed the game. When you take a look specifically at the wins for Lumberjanes, though, that’s a really, really big freaking deal. Like, I dunno if you’ve noticed, but that’s a mainstream, best-selling all-ages comic book about a diverse group of girls by a group of women, and all of it’s really, really queer. A book like that never could have existed when I was a kid, and definitely never could have won two awards at the Eisners! That’s where we are today: a comic that would’ve been dismissed as too queer, too girly and too niche to be successful, or even maybe publishable, a few years ago, is now a multiple Eisner winner and is selling like hotcakes. Right on.

This year’s Eisner winners definitely mean something good for comics. It means a more open, welcoming and progressive comics community. It means a world where women and girls might no longer have to defend being fans of the comics that they love. It means a bright and wonderful future. For a complete list of this year’s winners, you can check out Comics Alliance (who also won an award for their comics journalism, congratulations!).

Years of Future Past #3 (Marvel)