Tangerine is a movie that looks and feels like it takes place on a hotplate and is infused with white hot lightning, which at first seems a little strange given the film’s Christmas Eve setting and its holiday themes. But honestly, if the movie had been made any other way it wouldn’t have been as fun, as moving or as effective. And that’s not the only thing that makes it stand out. A huge part of what makes this movie so powerful and amazing is that its two main characters, both trans women, are actually played by trans women who are also incredibly talented actors. Because of that, and their involvement in crafting the film’s story and dialogue, the movie has an authenticity that is rarely found in films with trans characters.

As a trans woman, I’m pretty willing to watch most movies about or featuring trans women, and I’ve been waiting to fall in love with one of them for a long, long time. I came close when I saw Gun Hill Road, but in the end, I was really just enamored with Harmony Santana’s performance. It wasn’t until I saw Tangerine that I really felt butterflies.

This movie is, above all else, sweltering and electric. Most of the movie’s slow-burning heat comes from Mya Taylor’s amazingly deep and deliberate — and often uproariously comedic — performance as Alexandra, one of the film’s two transgender main characters. The film’s crackling and bubbling energy comes from Alexandra’s best friend and partner-in-crime Sin-Dee, played with energetic hilarity by fellow newcomer Kitana Kiki Rodriguez. Together their characters are an unstoppable force of nature moving through the streets of Hollywood. They inject so much life and vibrancy into the movie that you’ll feel like you’ll live till you’re 150. 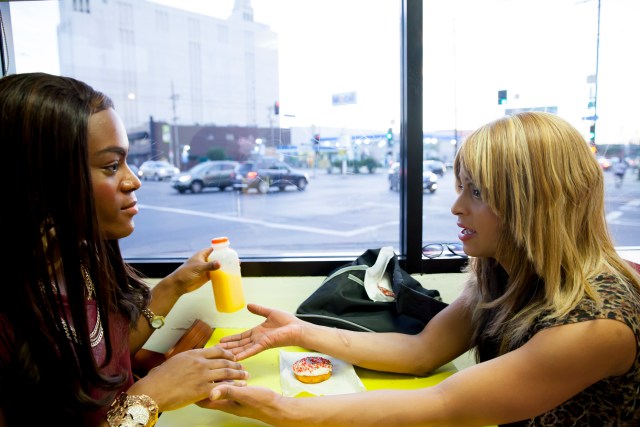 If you break it down, Tangerine (which was shot entirely on iPhone 5s phones and ends up being intimate and gorgeous because of it) is a story of one day in the life of two friends. Sin-Dee and Alexandra both work as sex workers in LA. Sin-Dee’s recently been released from a four-week stint in jail, and when she meets up with Alexandra at Donut Time on Christmas Eve, she finds out that her boyfriend and pimp, Chester, cheated on her with a cis girl. The film follows Sin-Dee as she tries to track down the “fish” and find her Chester, and Alexandra as she hands out flyers for her singing performance that night. But really, the film is so much more than that. I wasn’t joking when I said it’s a great Christmas movie. In the end, Tangerine is all about the importance of chosen family and being there for the ones you love when they most need you. What could be more Christmas-y than that? The film’s finale is honestly one of the most touching and beautiful moments of true friendship I’ve seen on film in years.

While the two stars give off completely different energies, both have perfect comedic timing and the movie has a sense of humor unlike any other. They’re also a terrific comedic team. Sin-Dee’s humor comes from her over-the-top and out there personality, while Alexandra has the deadest deadpan sense of humor I’ve ever seen. Director and co-writer Sean Baker said that in crafting the film and dialogue, both Rodriguez and Taylor had a lot of input, and Rodriguez even brought the idea of Sin-Dee chasing down the “fish” after being inspired by one of their friends. Baker also said many of the film’s funniest lines were improvised by Rodriguez and Taylor. 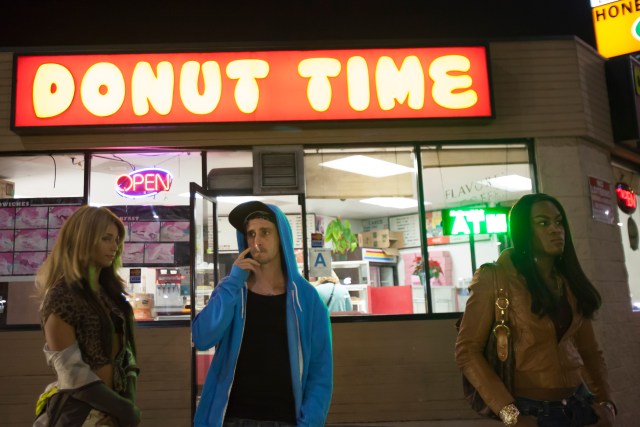 Both Rodriguez and Taylor were brilliant. Rodriguez should be getting “funny sidekick” or even “funny main character” roles left and right. I’d watch her in anything. Taylor should have her door being knocked down by producers looking to cast the lead in their next big dramatic comedy. She has a real power and magnetism to her, the kind that makes stars. These two were able to deftly make the entire theater burst out in laughter over and over again, and then move the entire theater to tears fifteen minutes later.

It’s also true that this movie is harsh. It’s rough, it’s sometimes violent and the transphobia in it is very, very real. It doesn’t pretend that these women are perfect people or that trans women of color have it easy. Baker said that when he first got Taylor to sign on, she said that she’d be in the movie if he promised her two things. She told him, “Number one, I want you to show how brutal it is, how tough it is for the women out here, the hardship and what they put up with every single day. And number two, I want you to make this hilarious.”

There was something else I noticed while watching this movie. It was exciting, and not just because of the Mercury-flying-through-the-solar-system-at-one-hundred-thousand-miles-per-hour speed that it moves at, but because this might be first major motion picture I’ve ever seen that didn’t make me feel like it’s trans characters were being othered. Even in movies like Gun Hill Road and Boy Meets Girl, which both have trans women in major roles, and Paris Is Burning, which was full of trans people, I always felt like the intended audience was cis people and they almost didn’t expect someone like me to be watching. With Tangerine, I finally felt like I was a part of the intended audience. There were inside jokes, it wasn’t overly male- or cis-gazey, the characters seemed familiar. It was familiar. It was also downright wonderful, seeing such a huge number of trans women in a single movie. This was a world where trans women don’t exist in a vacuum, where they have other friends who are trans, it was just like the real world.

I’m not saying this movie was perfect. It focuses too much on another character, the taxi driver and regular customer of Alexandra and Sin-Dee, Razmik, played with skill by Karren Karagulian. He’s clearly meant to be a familiar face for all the cis people watching and an entry point into the world of transgender sex workers, so I do understand that his storyline makes the movie more accessible to a wider audience. Still, I would have rather seen more screen time for Sin-Dee and Alexandra. There were also a few times where I felt like maybe the audience was laughing at the characters because of who they were, and I’m specifically talking about them being trans women of color and sex workers, but that’s maybe more on the audience than on the filmmakers. Some of the violence is also fairly disturbing for a film that’s largely a comedy, but again, I feel like that was a part of the film’s goal in accurately portraying this world. None of these problems took me out of the the movie for long, though.

Other cis filmmakers should pay attention to how Baker and co-writer Chris Bergoch made this film. They did it the right way, finding actual trans women and asking them to help tell the story. Not only that, but according to Baker, even though the film is an independent movie and therefore isn’t making huge profits, “some of the proceeds are going to the (Los Angeles LGBT) center on McCadden… and that’s through our very generous and wonderful executive producers Mark and Jay Duplass and Marcus and Karrie Cox at Through Film.” You may remember Jay Duplass from his role as the almost always terrible Josh on Amazon Prime’s Transparent. Tangerine should be setting the new bar for what a movie about trans people is.

Eddie Redmayne will almost definitely get Oscar buzz for his performance as a trans woman in his upcoming film The Danish Girl, and Roland Emmerich’s Stonewall will probably get nationwide distribution. But if you’re looking for a film that accurately portrays the lives of trans women, has amazing performances by trans women of color and tells a great story about trans women, this is the one you should go to. It really is a shame that those movies will get the attention and praise that this one deserves. Things don’t necessarily have to be that way, though; people need to get out and see this movie. If it’s popular in LA and New York and Toronto, it will move to more cities. If it’s popular in those cities, it will move to even more. Tangerine is the type of movie that is going to be talked about for the rest of the summer, the rest of the year and probably for a while to come, so the smart move would be to go and see it now.

Tangerine is currently playing in Los Angeles, New York and Toronto, but will open in more cities in the coming weeks. To find out more about the movie, you can like it on Facebook or check its website to see where it will be playing near you.