Previously on Wynonna Earp, we learned that Waverly Earp wasn’t only a metaphorical angel but also literally born of a celestial being, the gates to the Garden opened, Wynonna lost Peacemaker then found it again, WayHaught got engaged, and Wynonna went on a bender after a fight with Doc and slept with Amon.

This week, we open on a butt. 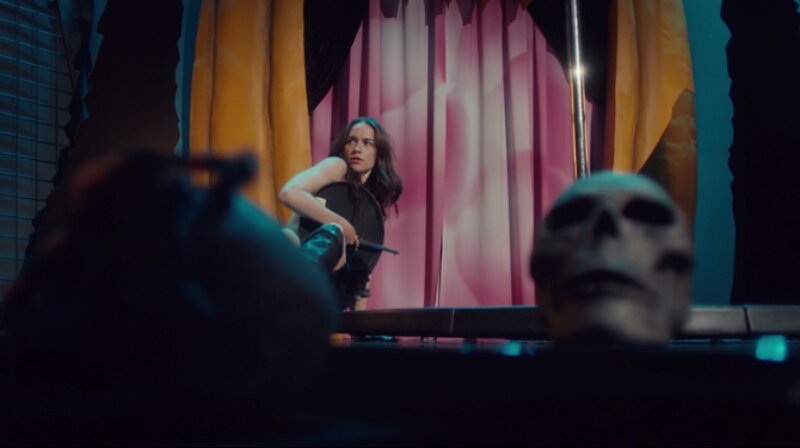 Oops, I did it again.

Amon asks her to leave so she wraps herself in some vagina curtains with a tasteful boa belt and struts to the Purgatory Police Department so she doesn’t have to hike all the way home mostly naked.

We then cut to a pumpkin patch where some Black Badge agents are patrolling. Apparently never being scarred by a single Goosebumps book in their life, they walk right past the terrifying scarecrow wearing Widowesque finger jewelry. So they never see it coming when all of a sudden it leaps off its post and pitchforks them to death.

Back at the Homestead, Waverly is gleefully decorating the front porch and Nicole, knowing full well there’s no way trick-or-treaters are making it all the way out to the Earp property, is amused at her gal’s Halloween spirit. 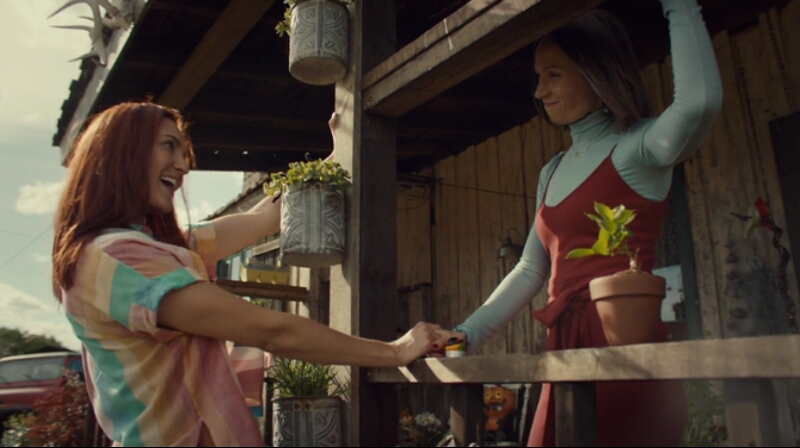 I deeply appreciate that Waverly was determined to climb on banisters to decorate instead of asking her tall girlfriend to help.

Also this is neither here nor there but I adore it when the smaller half of a couple is on a top step and the taller is on a bottom step so their heights are temporarily reversed. So cute. Anyway, Waverly tells Nicole she’s going to spend some quality time with her sister today, and Nicole is fine with that because her and Rachel are going to the Big City to do some wedding shopping anyway. Waverly jokes that Nicole doesn’t need a white dress if she wears a white hat, specifically her stetson. 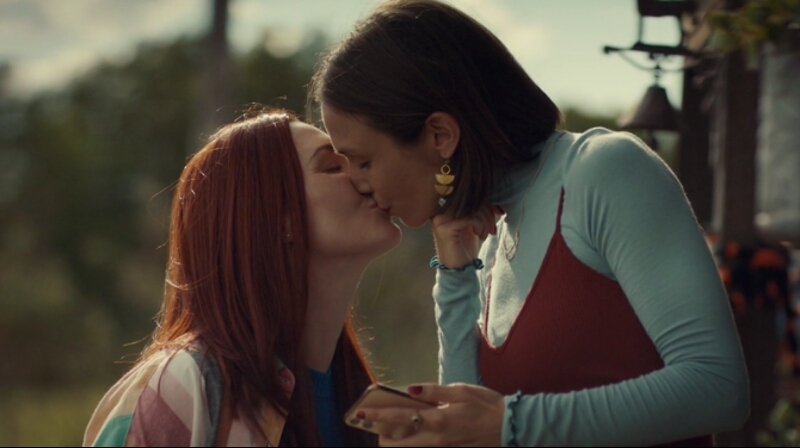 “If I said I want your body now, would you hold it against me?”

Before they can break in another set of stairs, however, Waverly gets a cryptic text from Wynonna and knows she has to go see what her sister means when she says, “Bring pants.”

Jeremy beats Waverly to Wynonna’s side and is surprised to find her clothed in vagina curtains but honestly not as surprised as someone who has never met Wynonna might have been. He tells her that his new boss is on his ass to get Agent Earp to deliver and she hasn’t brought them a demon in weeks. 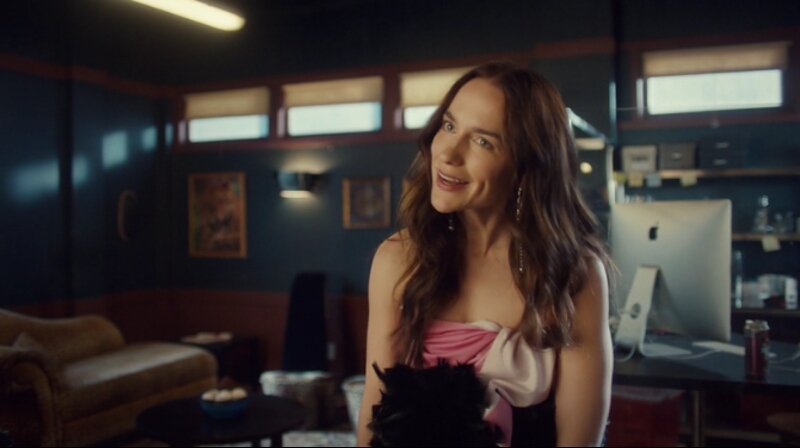 Me explaining to coworkers that “EOD” means “before I go to sleep” not “5pm sharp.”

Waverly interrupts the debriefing, entering the room dressed as a ladybug, which I believe is a nod back to Season 2 when Wynonna is listing lipstick names and Waverly thinks they’re doing a bit and says “flaming ladybug” which Wynonna steals as a nickname for herself later in the episode. 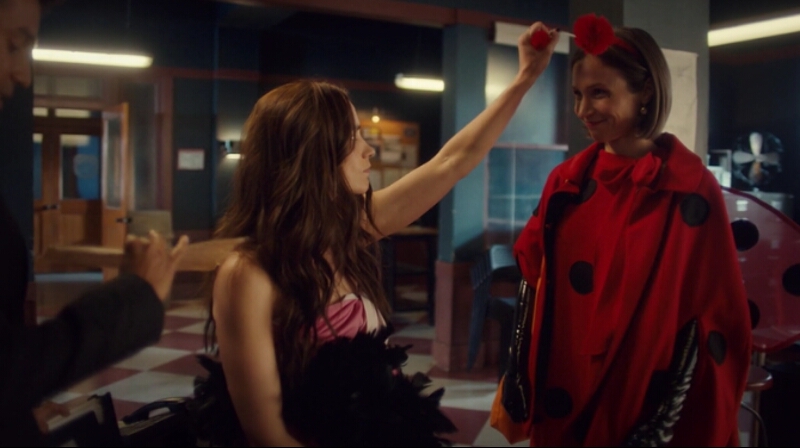 I could have just used this for 90% of the captions but I’ll say it once and you’ll just feel it the rest of the ep: THE EARP SISTERS ARE VERY IMPORTANT TO ME DOT TUMBLR DOT COM.

Jeremy tells Wynonna that he has a job for her and needs her to get the Extractor and bring in a demon scarecrow named Rotten Jack but not kill him. Waverly tells Jeremy they simply can’t do BBD’s bidding today because they have big Halloween plans. She’s determined to have her Earp Sister Day. And she brought Wynonna a costume. 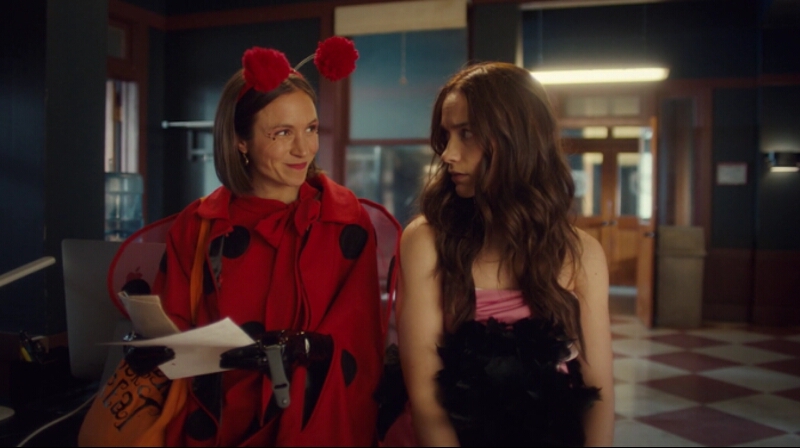 Waverly’s face screams, “I solemnly swear I am up to no good.”

You would think Waverly would be soured on B. Spears because that’s who Nicole and Shae were seeing in concert when they decided to get married, but then again, who could blame them for being hyped up after seeing Toxic performed live. 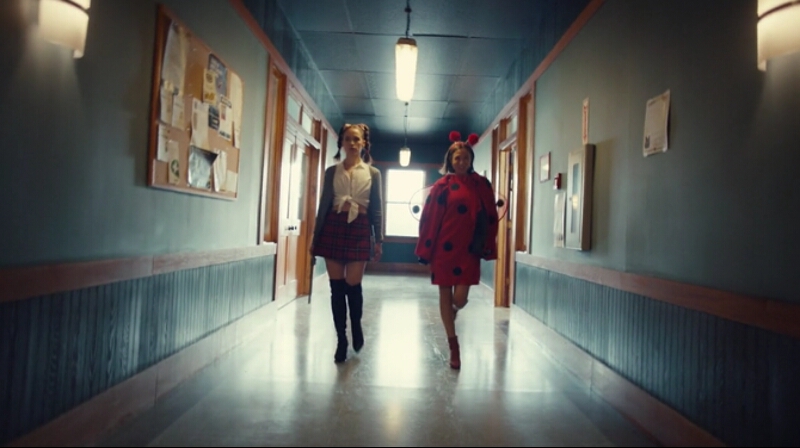 While the Earp sisters head out for some Halloween happenings, Doc goes to the Glory Hole, dressed like Freddy Mercury, possibly for no reason other than he felt like it. It’s not like Waverly was hosting a proper Halloween party, right? Either way, I’m not mad at it. We love bisexual icons stanning bisexual icons. Amon explains the demon game night situation to Doc, saying they’re taking bets on who Rotten Jack will kill and when. Doc isn’t amused and thinks Amon is asking for trouble, but Amon doesn’t care what Doc thinks because he’s been slacking on his Glory Hole liquor duties. Amon then starts his quick descent from morally ambiguous demon to wretched man, feeling over-confident in his Earp heir immunity since he had sex with her, clearly not knowing that Wynonna shot her own big sister when she went too far past the line.

Doc knows better and also is still harboring a bit of resentment about their most recent fight so he just laughs in Amon’s face and stalks off.

Elsewhere in the Ghost River Triangle, Waverly and Wynonna follow a map Jeremy gave them to find the Extractor, and end up at a cute little trailer set-up. They knock on the door (Wynonna delivering a perfect, “It’s Britney, bitch”) and when it opens they’re surprised to find their old pal Casey the Half-Demon. 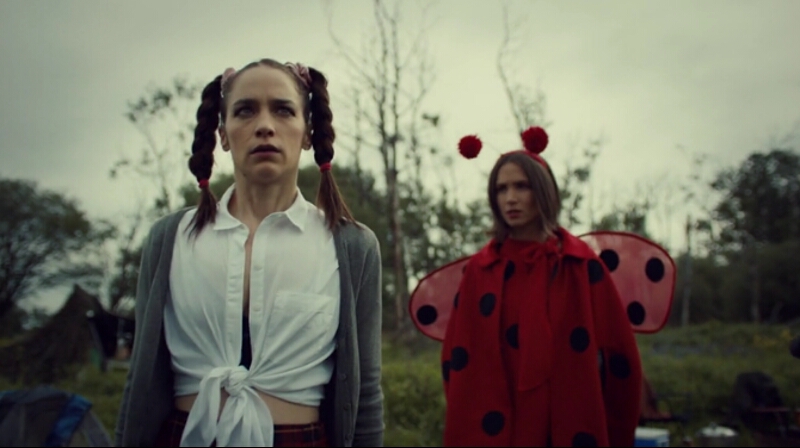 I love that Waverly relented to doing this task but first she was going to braid her sister’s hair if it killed them both.

Back at BBDHQ, Jeremy blows off his boss similarly to how he blew off the Earp girls, determined to get to this meeting he’s been mentioning. When he gets there, it seems to be a group therapy session, and he seems to be there for a cute boy with a lil bandage on his nose. Jeremy gets excited when this cute boy remembers something he told him before, and at first it seems like awkward flirting, but then Jeremy calls him Robin. Robin looks at him with friendly eyes, but not the familiar way he once looked at our favorite Doc-obsessed, science-loving nerd.

Back at Casey’s trailer, Waverly and Wynonna do their darndest to convince Casey to give them the Extractor when finally he explains that HE’S the Extractor. And he doesn’t want to go with them. 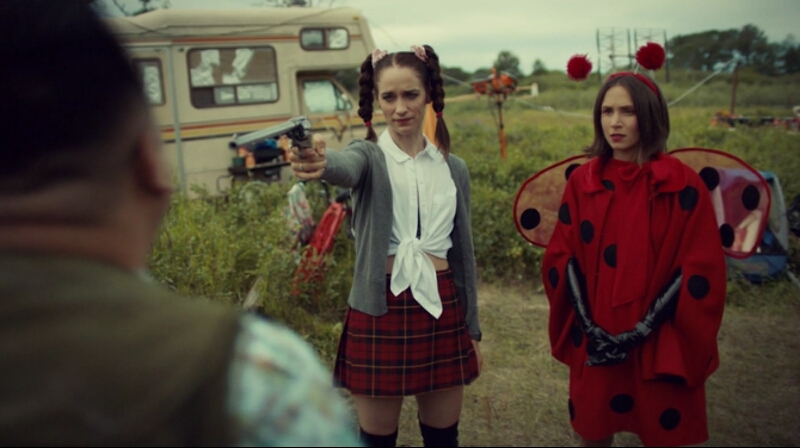 I would like to note that Peacemaker never glows when Wynonna points it at Casey. She was never going to actually hurt him.

He gets worked up that they’re working with BBD, he feels betrayed by his buds. “We cooked chili together!” he exclaims as he opens a can to blind them with some kind of magic flash, puts on a gas mask, and runs into a nearby field. The Earp sisters follow, Wynonna echoing his chili words back at him, but suddenly they find themselves surrounded by fog, as docile as Dorothy in a field of poppies. By the time they find their way out of the fog, they not only don’t recognize each other, but they can’t even remember their own names. 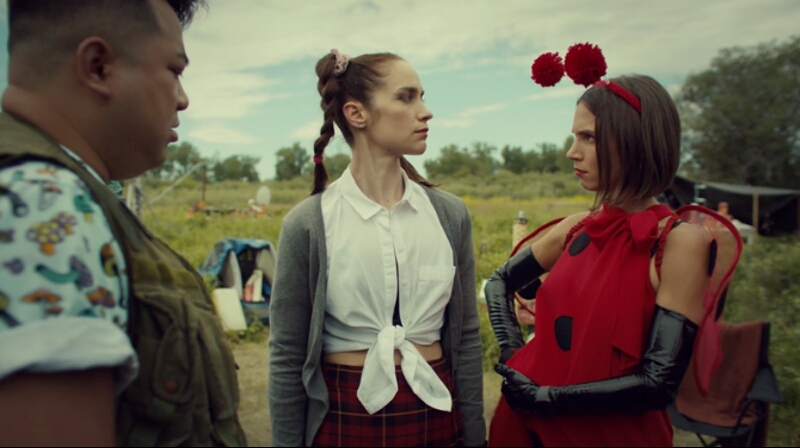 Fictional Amnesia is always really interesting to me because as someone who minored in psychology and also took a cognitive neuroscience class in college because I’m an idiot who thought they would be the interesting way to fulfil my required science credits, I learned a lot about long and short-term memory, and how brain injuries and other amnesia-causing situations (including drugs or trauma) will affect everyone so differently. Like on paper it might seem weird that they remember that what Wynonna is wearing is a school uniform but not remember it as a Britney Spears costume, and frankly it IS weird, but it’s not impossible. Brains are weird, is what I’m saying. And memory is a mystery, especially to me, someone who will find herself in a whole room reaching a specific direction without knowing why until seeing the thing I was about to pick up reminds me.

When they make it back to Casey’s campsite, Waverly immediately punches him square in the face.

Casey is shocked that “the nice one” who demanded they use vegan ingredients during the Chili Cook-Off FOR FREEDOM just cold clocked him but he eventually calms them down and convinces them that they’re just super high and uses their map to point them toward home.

The Earp sisters are feeling giddy and silly so they stumble off toward what they hope is a car they can hopefully drive, not even realizing they left behind Peacemaker.

When they get back to the Homestead, they start investigating the house to figure out who they are. As someone who just played the video game Gone Home for the first time where I basically had to learn about “my” family by exploring their house, I found this delightful. 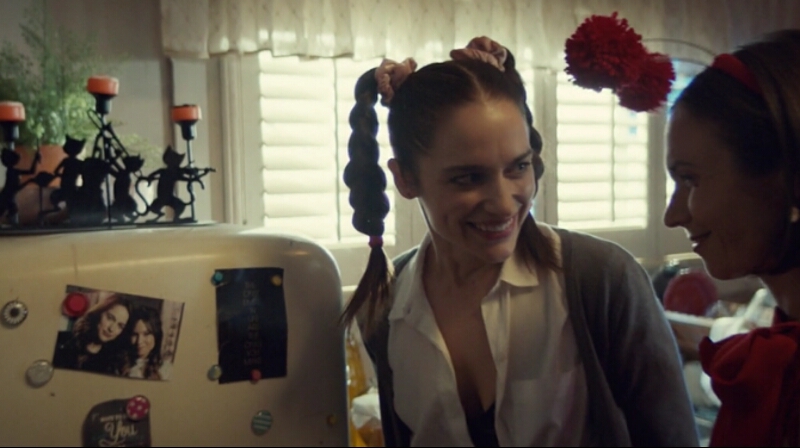 Wynonna thinks maybe they’re roommates, but Waverly knows that they’re sisters, somehow. Wynonna thinks it’s awfully cute that they’re sisters and they live together and skips off to find mail with their names on it. They accidentally swap names and, like drunk girls incorrectly solving an escape room, start to incorrectly assume things about their lives. Wynonna thinks she works at Shorty’s, because she likes the way Rachel’s dirty shirt tastes of whiskey and Waverly feels drawn to the cop uniform she found and remembers loving punching Casey so she assumes she must be a cop. 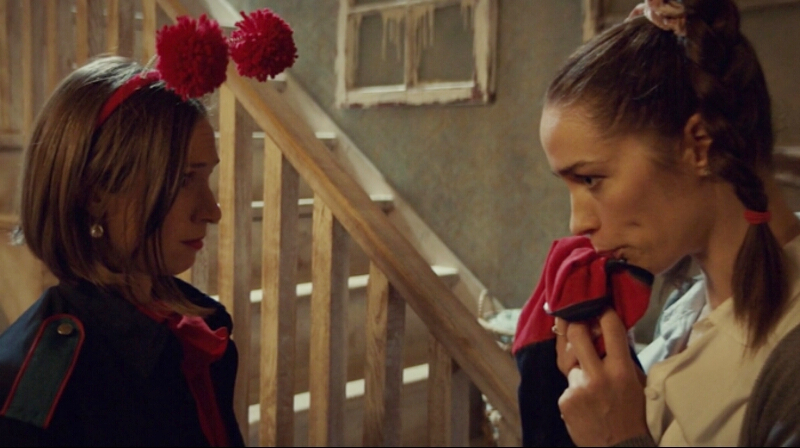 Lick first, ask questions later wouldn’t be MY first investigative technique but you do you, bb.

Waverly starts to talk about the rush she felt when she punched Casey, but since Wynonna isn’t feeling like herself, she doesn’t clock it as a red flag and they decide to go to Shorty’s, where surely Wynonna is working for Halloween.

Next page: Taste of a poison paradise.