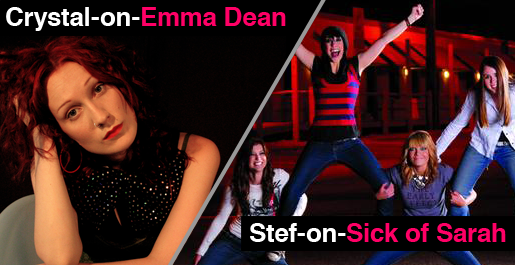 I. Crystal on Emma Dean

Emma Dean is an Australian artist trained in singing, violin and piano, with a number of releases under her belt — the latest of which has been described as “like pop music, but also musical theatre.” Emma can cite amazing artists such as Amanda Palmer as people she’s been invited to tour with and music critics promise that her debut album, ‘Real Life Computer Game’, ‘will leave you gasping for breath.’ Unfortunately I couldn’t catch up with Emma in person, lest I also be gasping for breath, and so I got to know her via email instead – 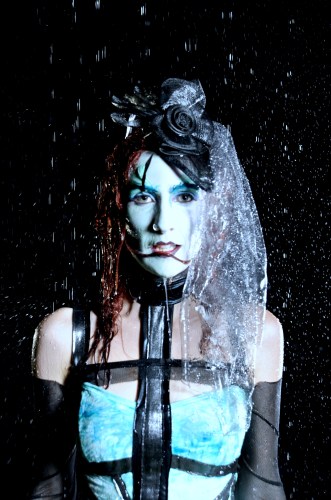 What’s the most exciting thing happening in your life right now?
I have so many exciting things happening at the moment – too many for my brain to handle! Right now I’m collaborating with a wonderful Brisbane based theatre group called Zen Zen Zo Physical Theatre on an adaptation of Shakespeare’s The Tempest. I play Ariel, the slave of a magician called Prospero. She weaves the story through her music (which I have written specifically for the production) and acts as the narrator. Ariel is usually played as an innocent nymph-like creature however in our version she will be a saucy, seductive, cabaret diva! This will be one of my first major acting roles.

Your debut album, Real Life Computer Game, is out now. What can you tell us about it?
It is the musical theatre soundtrack for two years of my life (2006-2008)! It is epic, dynamic, complex, simple, stirring, beastly, aggressive, gentle, calming, up lifting, confronting, annoying, pretty AND incredibly ugly. Kind of like me. I had a wonderful band in the studio (Anthony Dean, John Turnbull and Dane Pollock) and they took my direction very well! Poor things.

I love that you have called your genre ‘Elastic Pop Theatre’ in your bio – it makes me want to listen even though I have no idea what it really means. So what does that mean, exactly?
To be honest, I now simply call my music ‘Theatrical Pop’. This is mainly to cause less confusion. Originally the “elastic” came from the idea that my musical sound is interchangeable, stretchy and tends to dynamically expand and contract at the drop of a hat – like elastic. I often play in solo, duo or trio mode and sometimes with a full five piece band plus choir or string ensemble. Like elastic it can be expanded, but the underlying message and purpose remains.

Tell us something interesting about yourself that we won’t find in your biography.
When I was two years old I chopped my thumb off in the chain of my Nanna’s exercise bike.

Your song ‘cocaine’ is about reading a rumour on the internet that you’re a cocaine addict. Do you believe that all publicity is good publicity?
I got a good song out of that one so it can only be a good thing!

Amanda is lovely and so talented! She came up to me from across the street and said “Emma… is that you!?” and planted a huge kiss on my cheek.

Did you ever find out where it came from?
I have a funny feeling it all started with… me. My friend told me that her brother told her that I was a cocaine addict. I found it hilarious so I made a comment to another friend via my personal MySpace account. Someone must have found it and ran with it. Not sure who THAT person was though. If I find them, I’ll thank them.

You’ve supported Amanda Palmer on tour – how was that? A lot of us are huuuuge AP fans…
Amanda is lovely and so talented! She came up to me from across the street and said “Emma… is that you!?” and planted a huge kiss on my cheek. She was even eyebrow-less at this stage. I found her to be very down to earth and real. I like that. Interesting Fact: The Danger Ensemble, who toured with AP on the ‘Who Killed Amanda Palmer Tour’, are friends from Brisbane – they have all been members of Zen Zen Zo Physical Theatre, apart from volinist Lyndon Chester who used to have his violin lessons with the same teacher when we were little. So many connections!

Let’s play Desert Island Discs. Which three albums are you taking to the island?
I would take the “Wicked The Musical” Soundtrack and listen to it first. This is not only because it is absolutely outstanding but because I will start believing I can defy gravity and fly home (assuming I am stuck and want to get home, that is). Then I would move on to “The Best Of Queen” to pull me out of the slump when I realise I can’t fly like Elphaba. Finally, when I’ve gone mad I would put on “Angry Birds” by Ben Stewart (the kooky man behind the production of my CDs!) and I would surrender to utter insanity.

I think that is the most well thought out answer I’ve ever had to that question. Lastly – what’s next for you?
After I finish The Tempest I will be taking a two month holiday in Europe and the UK. My aim is to reflect and get some clarity on what I’ve done and achieved in the past year and what I want to achieve in 2010. When you run your own business you sometimes forget to take holidays! When I return I will be getting stuck in to a tour called “The Wheel Of Frank Confession”, which involves artists from different states of Australia. It is a cabaret style show about confessing the deep dark stories and secrets behind our songs! 2010 will also see more collaboration with Zen Zen Zo and the creative development of a musical I co-wrote with Jacob Diefenbach called “Downside Up”, which is being directed by an amazing Brisbane actor called Dirk Hoult.

So there we have it! If you want to check out Emma’s music or The Tempest,  head on over to her website for all the info. Or if you live outside of Australia, you can search for Emma on CD Baby. You can check out her film clip for Real Life Computer Game below –

Next page: Stef sits down with Sick of Sarah …

Join A+!
Related:Australiainterviewsick of sarah